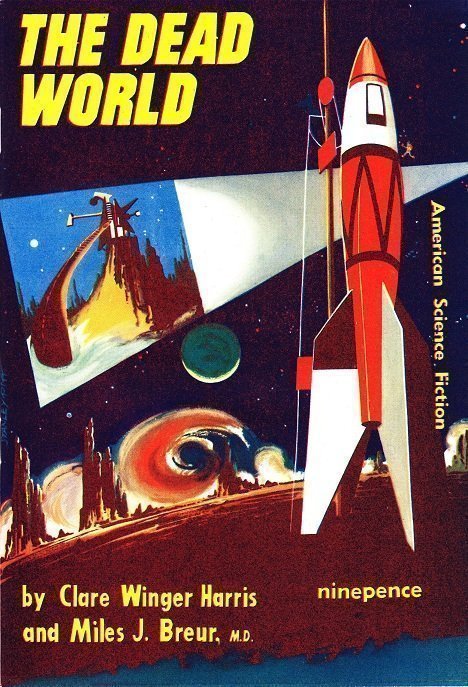 Once more, we return to Australia’s American Science Fiction Magazine series, published by the Malian Press. Here is #15 (July 1953) with three wonderful tales! The cover as usual is by Stanley Pitt, and amazingly enough, this time it does depict a scene from the cover story.

THE DEAD WORLD is by Clare Winger Harris and Miles J. Breuer, M.D.
Amazing Stories, Dec 1929 – originally appeared as “A Baby on Neptune”

Space travelers intercept messages from an alien race on Neptune, however, on arrival, find nothing but a dead, gaseous planet with a barren landscape. Returning to Earth, the scientists send out a reply to the alien race, and receive a response. Realizing something is amiss, they return [to Neptune] with some equipment, on an assumption that the aliens are themselves in a gaseous state. They are correct, and note too, that in their current form, move in super slow motion. I won’t ruin the plot beyond this point, but will note that I thoroughly enjoyed the story-line.

MY NEPHEW NORVELL is by Nelson Bond
The Blue Book Magazine, Jul 1946

Like many of Bond’s stories, this is an excellent piece of imaginative writing. The narrator finds himself hosting a young man [reportedly] from the far-flung future claiming to be his nephew, whom in turns tells his uncle of the great and many scientific accomplishments he has rendered. Well, our fine narrator is not scientifically inclined (yet) nor has he any clue what the youth is talking about. Norvell realizes with horror that he traveled too far back in time and may have disrupted his uncle’s future, as well as his own. Bond smartly wraps up the story in classic fashion, and I sure won’t ruin the plot for any potential future readers.

THE BELT is by Wallace West
Science Fiction Quarterly, Nov 1951

This turns out to be a horror story, of sorts, with what may be the most inappropriate story title yet. I’m not sure why “The Belt” was chosen over any other. Given the conclusion, I’d have titled it “Ignition” or something along those lines. A 7th-generation lad takes control of an island production plant, where the workers are mindless slaves, stuck in a daily routine, the only life they’ve ever grown to know or understand. But, when the new owner takes over, and reads his father’s diary and learns the horrific truth(s) of the island’s history, he seeks to destroy all that was created by disrupting the routine and freeing the workers. But, you can’t undo generations of conditioning overnight, as our young man soon learns in a story with an explosive climax.

Have you read this story? Did “The Belt” seem appropriate; yes or no? What title would YOU have chosen?

(NOTE: Gary Lovisi’s Paperback Parade #63 ran an article concerning the four Gnome Press “Armed Services” paperback editions. I supplied an original Nelson Bond bibliography on The Thirty-First of February which 100% traced all the short story debuts. As a bonus, I also supplied concise plot synopses to all stories and novels. It was, thus, a genuine pleasure to re-read this Bond story, once more, a decade later.)

If you enjoy this sort of reading and research, please visit me at The Pulp and Paperback Reader blog, where I report on publications published in America, the United Kingdom, and Australia.

Dusty Ayres #4 and The Moon Man #6 Are Now Available