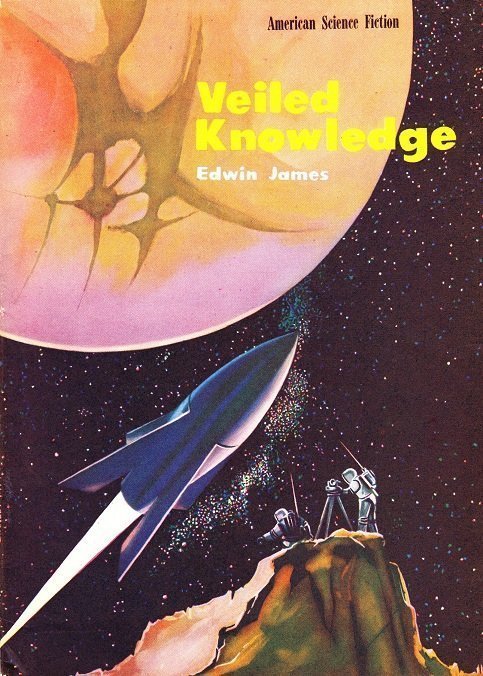 Veiled Knowledge by Edwin James is the 19th title in the American Science Fiction Magazine and published in Australia, in 1953. The story originally debuted in the August 1951 issue of Science Fiction Quarterly as “The Sun Came Up Last Night!”

The novelette is pure pulp-action-crime-adventure with a splash of romance. Aliens are hitting Earth with an interplanetary assault, slowly cooking us and causing raging storms, until we all die or meet their ultimatum: surrender and dismantle all our “arms.” In a race against time, a news-reporter must solve the mystery of the alien race while trying to stay alive as a secret set of humans attempt to murder him. But when he learns that there is a genius human pool of personalities secretly removed and living under a dome in the Pacific, he must find a way in and survive their [own] murderous plans. The title has actually numerous hidden [veiled] meanings in this story, and Edwin James handles each one adeptly.

The magazine’s short filler is Joquel Kennedy’s No More Pencils. The story appeared in the same American pulp as the above entry, but with a longer title, “No More Pencils, No More Books.” When a group of school kids roam free on Mars, nothing good can come of their explorations. Peter [Pug] Stevens discovers a “Martian” encased in glass under the sands of Mars. While trying to carry the case, he breaks it, and the being comes to life. Withered and frail, the being can scarcely move, but speaks via mental telepathy, and convinces the children to bring him to an underground city where more of his kind are encased. Excited by their find, they agree, and in order to avoid a plot spoiler, let’s just say it doesn’t end pretty….

The author doesn’t appear to have written much, overall. Odd.

This particular issue tends to be cheaper to obtain than several others, because the authors and the cover art is less desirable, however, if you are a reader, this is a damn fine collection.

If you enjoy my entries here on Matt Moring’s excellent blog site, please visit me at The Pulp and Paperback Reader blog page. There, I read, review, comment, or present researched information predominantly on British publications.
Drop me a line sometime. I love comments and insightful thoughts, etc.

The Altus Press Memorial Day Weekend Sale Is On