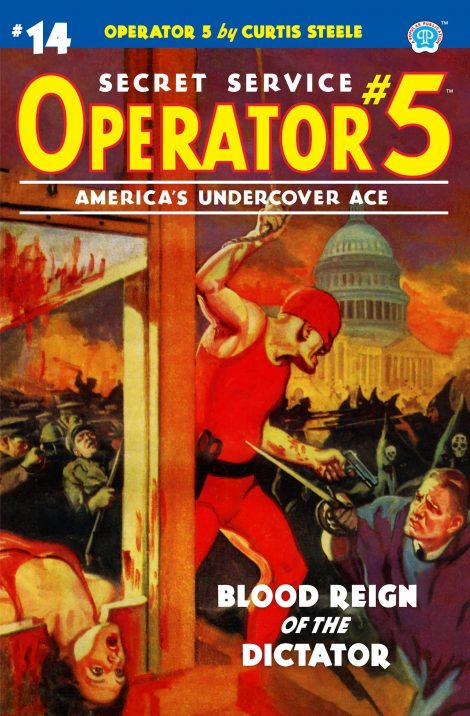 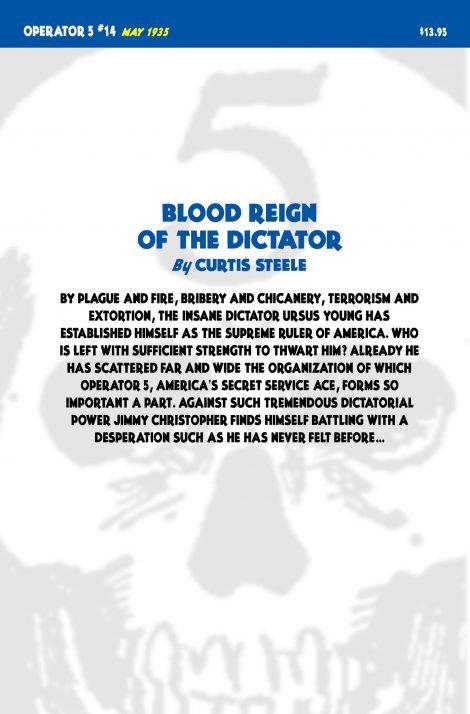 Operator 5 #14: Blood Reign of the Dictator 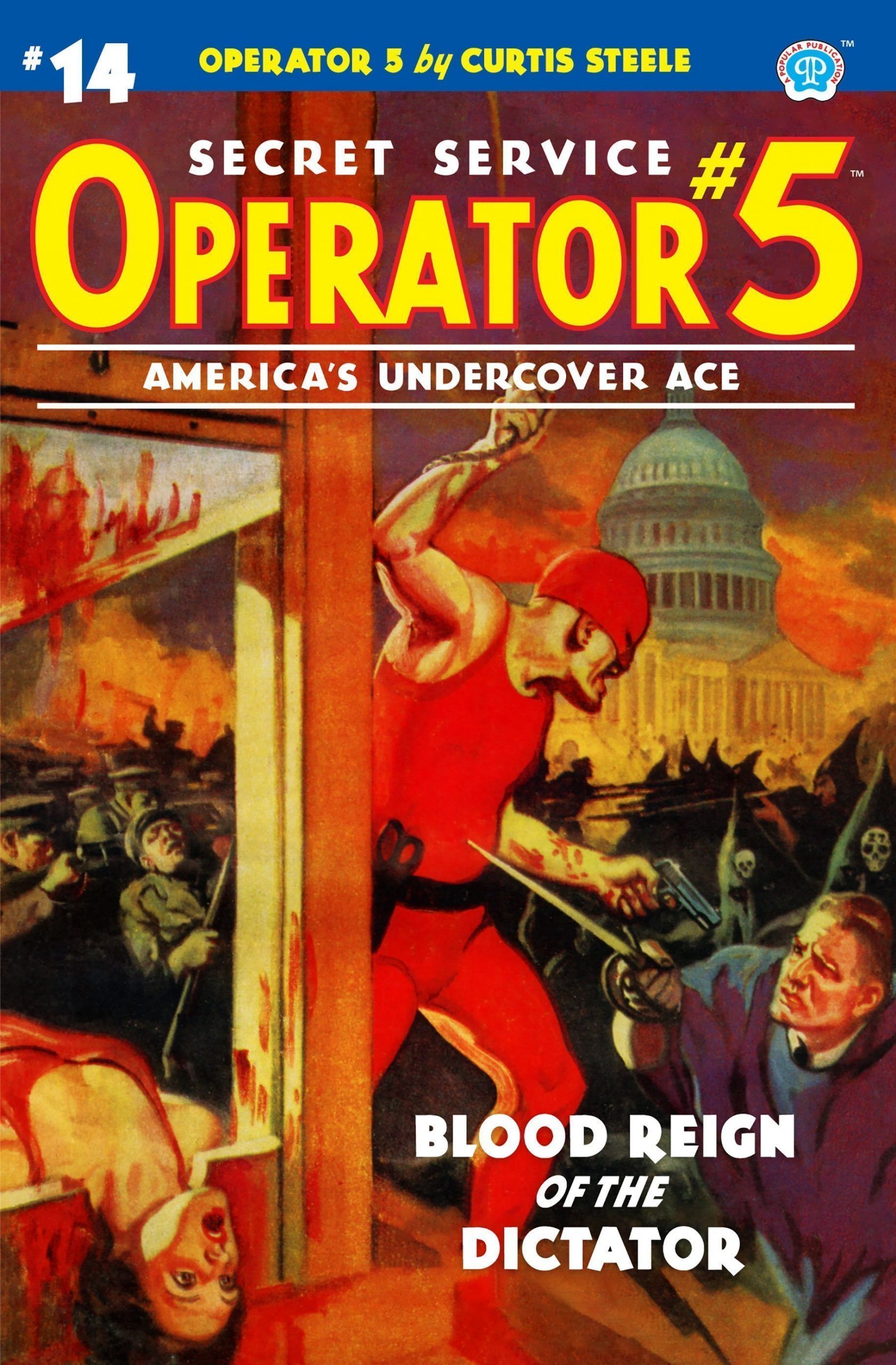 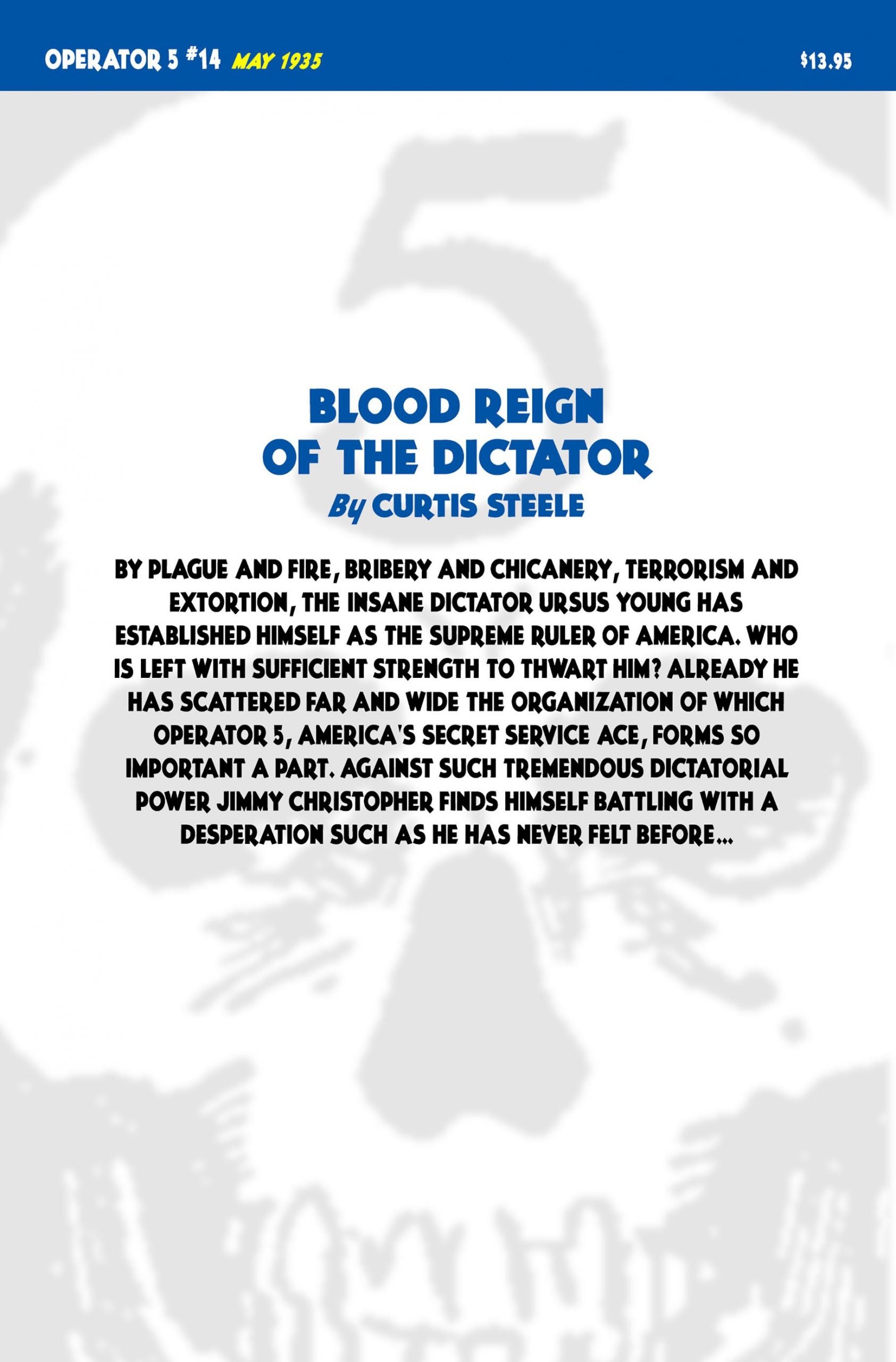 Operator 5 #14: Blood Reign of the Dictator

By plague and fire, bribery and chicanery, terrorism and extortion, the insane dictator Ursus Young has established himself as the supreme ruler of America. Who is left with sufficient strength to thwart him? Already he has scattered far and wide the organization of which Operator 5, America’s Secret Service Ace, forms so important a part. Against such tremendous dictatorial power Jimmy Christopher finds himself battling with a desperation such as he has never felt before…

By plague and fire, bribery and chicanery, terrorism and extortion, the insane dictator Ursus Young has established himself as the supreme ruler of America. Who is left with sufficient strength to thwart him? Already he has scattered far and wide the organization of which Operator 5, America’s Secret Service Ace, forms so important a part. Against such tremendous dictatorial power Jimmy Christopher finds himself battling with a desperation such as he has never felt before…

Be the first to review “Operator 5 #14: Blood Reign of the Dictator” Cancel reply

“Blood Reign of the Dictator” is the fourteenth Operator 5 novel, originally published in April 1935.

The setting is the state of New Cornwall (Connecticut?) whose capital is Hartland (Hartford?). A populist by the name of Ursus Young has been elected as the state’s governor. Through redistribution of wealth, he has wipe out poverty in his state and has established full employment. He is so popular that the state’s citizens do not seem to notice that he is terminating anyone who is in opposition to him, using a fake plague, whose symptoms are induced by the medicine distributed to cure it, and a real quarantine as cover so that the populace does not see what is happening. Operator 5 describes it as “that peculiar plague which has struck chiefly in the state of New Cornwall—attacks only those who are not friendly to Governor Young.” He is also running for President to bring his successes and his terror to the nation as a whole. Will the US become as totalitarian as Soviet Russia?

In addition, Operator 5 has a personal stake. As noted in Chapter 1, Diane Elliott has been publishing articles against the dictator, and was captured by the state’s KGB-like murderers called the “Cheka.” So, Jimmy Christopher to the rescue!

Operator 5 is quick to outsmart Governor Young and his minions and to rescue Diane his damsel in distress. Perhaps the dictator of New Cornwall is preoccupied with the impending election, making it easier for our hero.

Even as Jimmy Christopher is escaping the state in a plane, he is informed that the President is headed to New Cornwall.

The President knows that he is losing the election, and he does by a landslide, not even able to carry his own state. With Governor Young, now the President Elect, the current President wants to negotiate the best deal that he can from his incredibly weak position. He knows that only Operator 5 will be able to save the country from the dictatorial terror now in place in New Cornwall.

Yet, Operator 5 does not act for five months. Inauguration day arrives, but Young does not follow in the footsteps of previous Presidents. As soon as his predecessor is out of office, Young denies the Constitution, refuses the oath of office, but takes power. He starts by promising the people everything that they might want, while installing his personal apparatus of power, expanding his secret police from New Cornwall to command the armed forces and police departments of the US.

(Note: Young is likely inspired by Franklin Roosevelt whose policies were felt to be unconstitutional at the time. However, he was not brutal in his ascendancy as was Young.)

Operator 5 and his boss organize an underground, called the Secret Sentinels. In short order, the armed forces across the globe mutiny and under Operator 5’s leadership storm and take over Washington DC in armed combat. Operator 5 forces President Young to resign office by radioing across the country his many crimes. Young is forced to appoint the previous President as Secretary of State. Then Young resigns, thereby making the previous President his successor since the vice presidency is also vacated.

Could Young have done all that he did? The big flaw is in his ability to have controlled a state in the US, even in the 1930s, so thoroughly that it could have been run like a dictatorship without the rest of the country finding out. If he could have pulled off this impossible feat, using his established state organization, then yes, he could expand his power base to the rest of the US when he became President.

Could Operator 5 have overthrown Young? It also seems impossible that a popular politician, elected by a landslide, could be so quickly overthrown. Establishing an effective underground of the magnitude indicated in the story takes a lot of time. It is certainly possible that the underground could have been established, but not as quickly as done in the story. Once established, though, it would still have been very difficult to oust Young.

Despite these flaws, I must admit that I loved the epic nature of this tale, and have no difficulty in recommending the story. It has enough action to fill a thousand-page novel that one might find today!