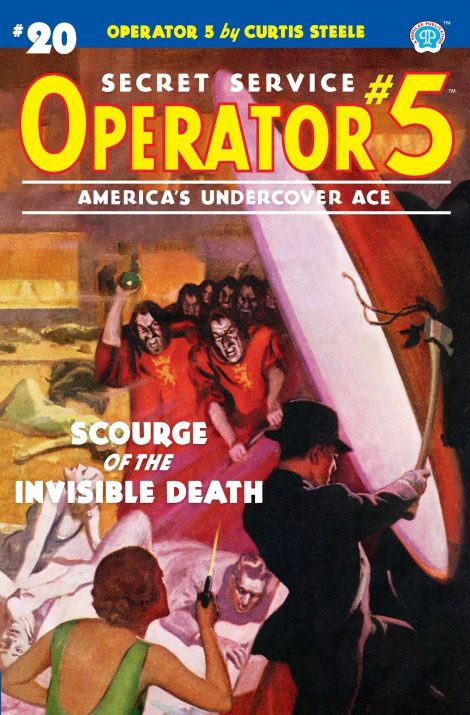 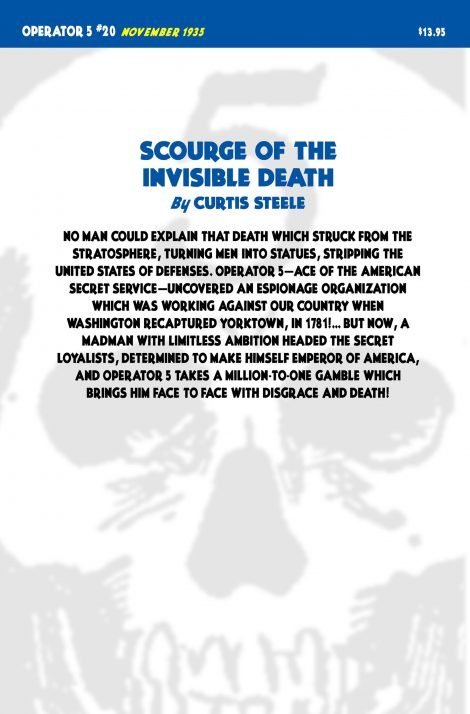 Operator 5 #20: Scourge of the Invisible Death 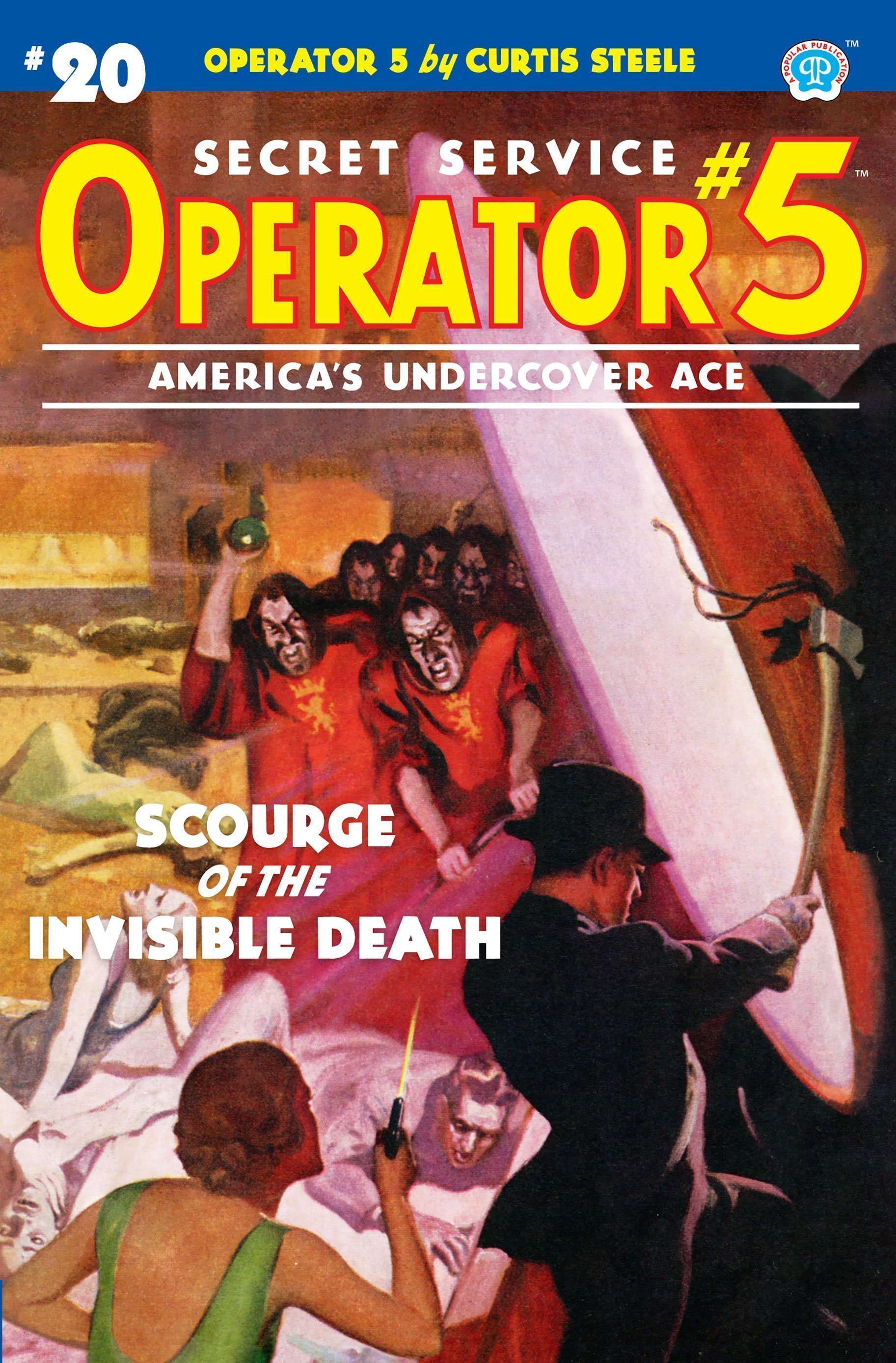 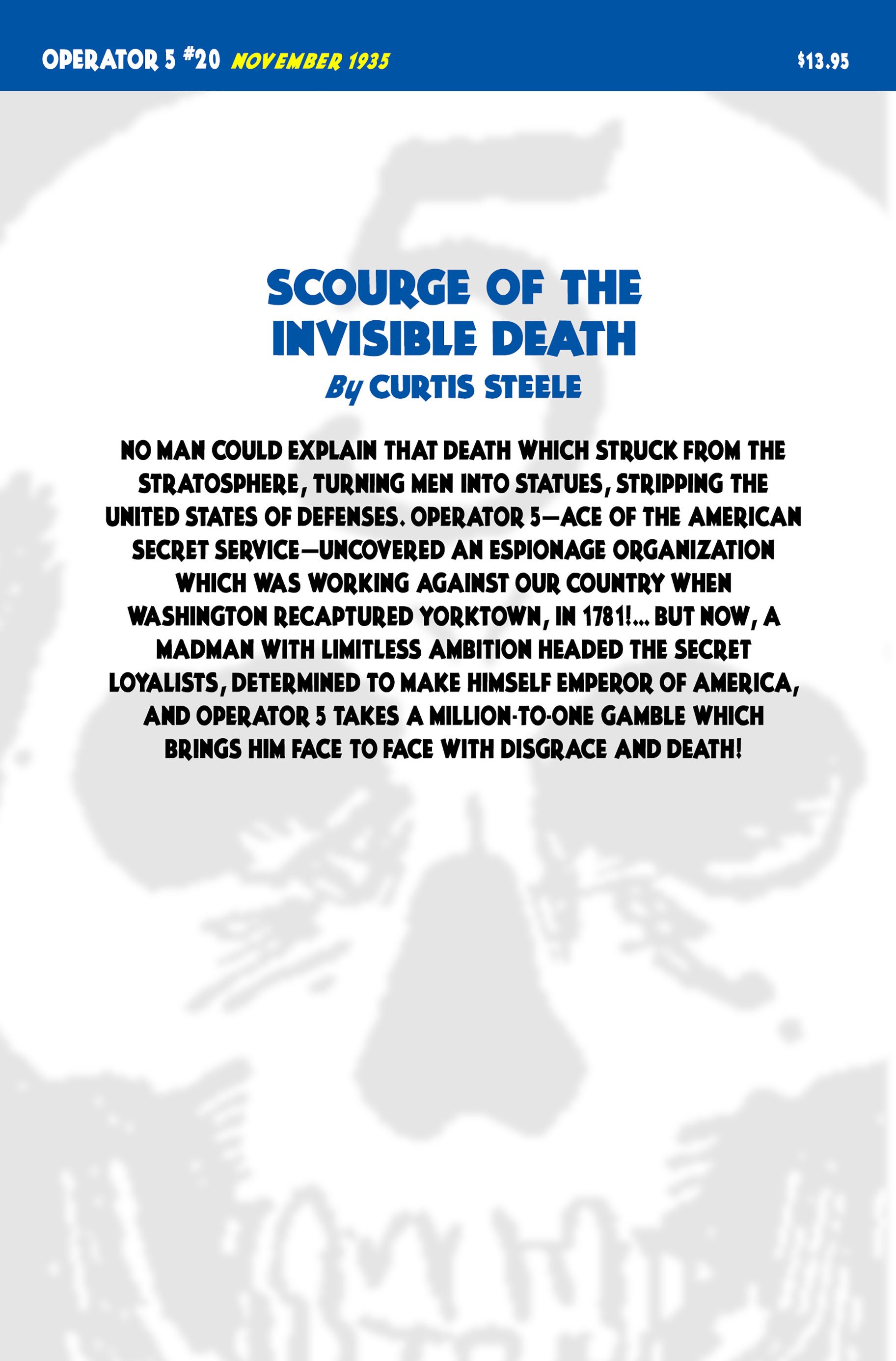 Operator 5 #20: Scourge of the Invisible Death

No man could explain that death which struck from the stratosphere, turning men into statues, stripping the United States of defenses. Operator 5—Ace of the American Secret Service—uncovered an espionage organization which was working against our country when Washington recaptured Yorktown, in 1781!… But now, a madman with limitless ambition headed the Secret Loyalists, determined to make himself Emperor of America, and Operator 5 takes a million-to-one gamble which brings him face to face with disgrace and death!

No man could explain that death which struck from the stratosphere, turning men into statues, stripping the United States of defenses. Operator 5—Ace of the American Secret Service—uncovered an espionage organization which was working against our country when Washington recaptured Yorktown, in 1781!… But now, a madman with limitless ambition headed the Secret Loyalists, determined to make himself Emperor of America, and Operator 5 takes a million-to-one gamble which brings him face to face with disgrace and death!

Be the first to review “Operator 5 #20: Scourge of the Invisible Death” Cancel reply

“Scourge of the Invisible Death” is the twentieth Operator 5 novel, originally published in November. 1935.

Carr indicated the October 1935 edition was the last story definitely written by Frederick Davis. This one is of unclear authorship, mainly because of dialogue that seemed inconsistent with earlier Davis novels. However, to me, this one seems to have been primarily, and perhaps completely, written by Davis. We have his typical plot of a tremendous device that is being used by a secret malefactor to destabilize and take over the US. The action scenes are similar to his. The footnoting is perhaps a little less, but not much so and very consistent with Davis’ footnoting. If Davis did not author this novel completely, he must have done most of the work. Indeed, if we did not know that Emile C. Tepperman would soon be Operator 5’s author, we would likely not doubt that Frederick Davis was the author of this one. (See below for more on Operator 5 authors.)

Mysterious rays are coming down from space such that people hit by one are killed, although initially they seem to be totally in paralysis. The first occurrence happens when the US is demonstrating its air power by flying hundreds of planes above Atlantic seaport cities. The demonstration is interrupted when the ray kills the pilots, followed by planes crashing. The ray is so strong that it can even penetrate men shielded by lead. Huge numbers of people, especially military, are killed as the ray is deployed more and more.

As it turns out, the murdering beam is created by punching holes in the ozone protective layer allowing killer rays to enter the atmosphere. (Note: While we know today that it is ridiculous for this phenomenon to create an immediate paralytic death, the author did not know it, and has a number of footnotes to support this possibility.)

The Secret Loyalists are the ones deploying this ozone disruptor. They are a group that started during the Revolutionary War, 150 years before this novel, to bring the US back to the British crown. (Note: Once again, we see Davis’s obsession, if it is Davis, with the English being aggressors against the US.) Now, though, the leadership of the group has been taken over by a man wanting to become the leader of the US.

As the problem comes into focus, Operator 5 provides the countermeasures that once again reverses the tide of defeat. As additional handicaps to hinder the super operative, Z-7 orders Operator 5 off the case under pain of death when the US government surrenders and Diane Elliott is taken prisoner.

Could the US be taken over by an internal group even with such a super-weapon? If it was possible for the organization to be big enough, it might be possible, but it did not seem to me that the organization as described in this novel had the breath of capability to the government.

Could Operator 5 have stopped this organization? Again given the weakness of the organization as described, it was certainly possible for Operator 5 to be successful.

This one is another exciting Operator 5 romp, and it is easy to recommend it. At the same time, it should be noted that a lot of the action and events are redundant with those in earlier tales. Also, as noted above, the scientific basis for the super-weapon is faulty.

For my read-through of Operator 5, I chose Nick Carr’s book on Operator 5 as my guide. His suggested authors are:

While I am not sure of the source, Wikipedia shows the following as authors:

My reading agrees with the Wiki suggested demarcation between Davis and Tepperman. Future reviews will include the assumption that Tepperman begins with #21.