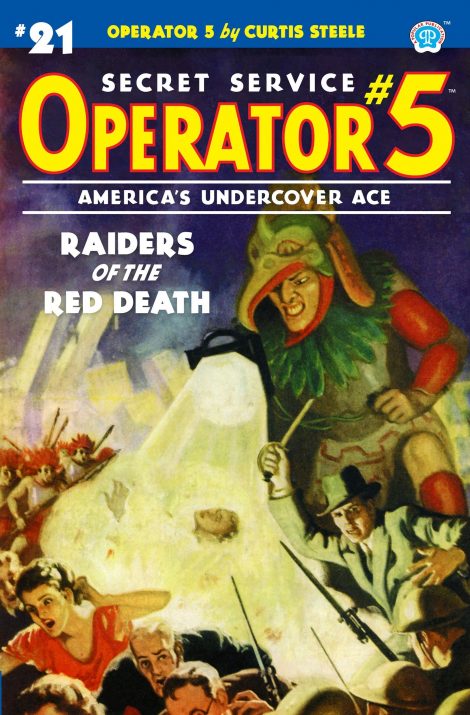 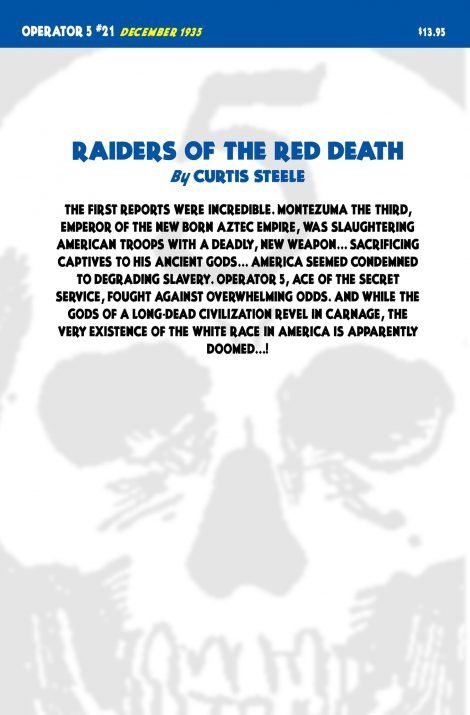 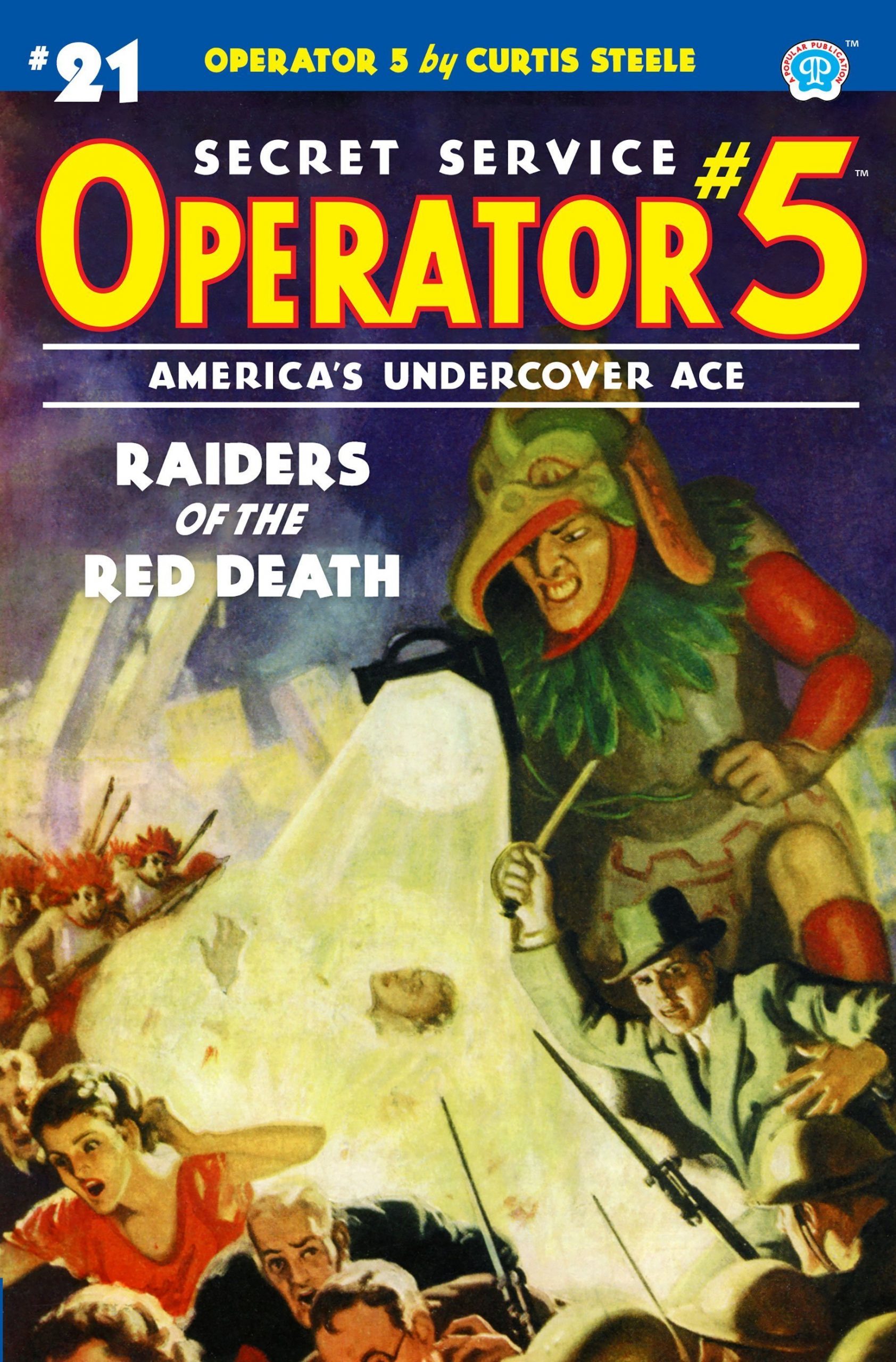 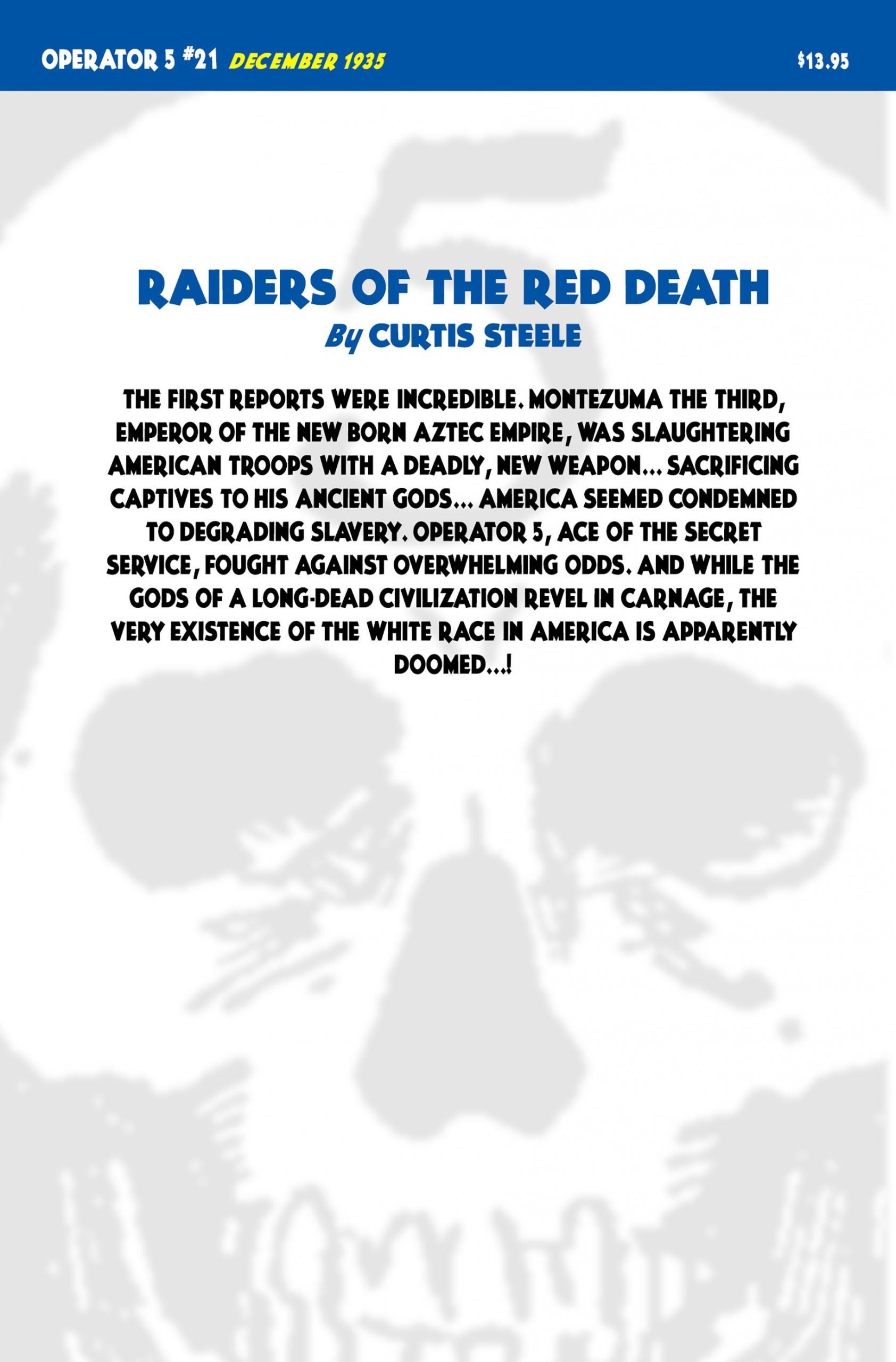 The first reports were incredible. Montezuma the Third, Emperor of the new born Aztec Empire, was slaughtering American troops with a deadly, new weapon… sacrificing captives to his ancient gods… America seemed condemned to degrading slavery. Operator 5, Ace of the Secret Service, fought against overwhelming odds. And while the gods of a long-dead civilization revel in carnage, the very existence of the white race in America is apparently doomed…!

The first reports were incredible. Montezuma the Third, Emperor of the new born Aztec Empire, was slaughtering American troops with a deadly, new weapon… sacrificing captives to his ancient gods… America seemed condemned to degrading slavery. Operator 5, Ace of the Secret Service, fought against overwhelming odds. And while the gods of a long-dead civilization revel in carnage, the very existence of the white race in America is apparently doomed…!

Be the first to review “Operator 5 #21: Raiders of the Red Death” Cancel reply

“Raiders of the Red Death” is the twenty-first Operator 5 novel, originally published in December. 1935. Carr indicated the October 1935 edition was the last one definitely written by Frederick Davis. This one (and additional subsequent ones) is of unclear authorship, mainly because of dialogue that seemed inconsistent with earlier Davis novels. While the November 1935 edition seemed to me to be the primary work of Davis, this one appears to me to be the primary work of Tepperman. Certainly there are aspects that appear to come from Davis, such as his typical plot of a tremendous device that is being used by a secret malefactor to destabilize and take over the US. However, there is a total lack of footnoting unlike Davis, and the style seems to me to be Tepperman’s.

In Chapter 1, we see that the Aztecs, under the command of Emperor Montezuma III, have gained control of Mexico and are mobilizing its troops along the Texas border; we also see a device put into action against the United States that can cause human to explode into many small pieces. In Chapter 2, Operator 5 heads for the border, but before he gets there, the Third Army of the United States is defeated with hundreds of soldiers blown into tiny pieces when they attempt to attack Aztec force; the army retreats to a safe position far within Texas, and Houston is evacuated. Operator 5’s plane is captured with a projection beam and force to land amid the Aztec Army, where he is taken prisoner. In Chapter 3, we see sacrifices reinstituted to the old Aztec gods, including the cutting out of hearts of captured Americans… with Operator 5 and his father slated to be sacrificed.

So, Operator 5 is once again totally behind the eight ball. Yet he fights back. He escapes, returns to NYC where Montezuma has now gone to conduct the war against the US, and is captured again. Along the way, he unravels the secrets of the electro-chemical aspects of the exploding death and saves countless people from it. He kills the emperor forcing the dismantlement of the Aztec war machine and reinstitution of the previous Mexican government back to power. The only loose end is the escape of Montezuma’s daughter, Delores, who vows to return and gain revenge against Operator 5.

NOTE: An ongoing weakness for Tepperman in his Operator 5 novels is that the invader boss moves his base to America. In this case, one would think that Montezuma could be better protected. Even in the 1930s, radio contact should have been able to keep the overall leader in touch with his military leaders.

Could the Aztecs successfully warred against the US as described in this novel? If they had the exploding death, they could have done it. Of course, it an absurd weapon with no technical backing. (Note: Davis tended to use extensive footnotes to establish credibility for otherwise outlandish weapons… but these footnotes are missing in this one.)

Could Operator 5 have stopped it? Again, as described, yes. However, his success is dependent on Montezuma coming to the US which seems so improbable as to be silly. For a criminal like the Pharaoh being in the US is a must; for a sovereign waging war against the US, coming to unconquered US territory would represent a risk far greater than anyone would accept.

The start of the novel is quite good, but the ending seems impractical. On the plus side, it has much action and several interesting scenes. A mixed bag, but one that the Operator 5 fan will enjoy.