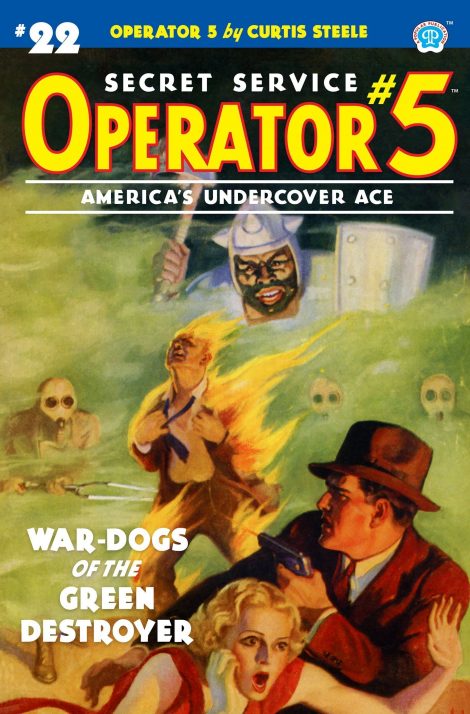 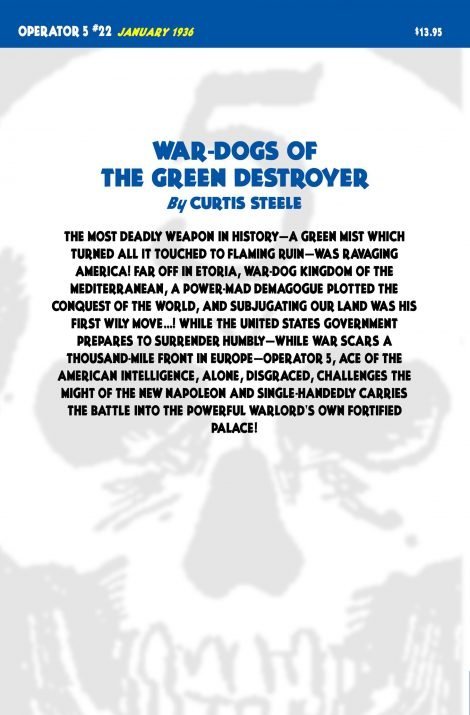 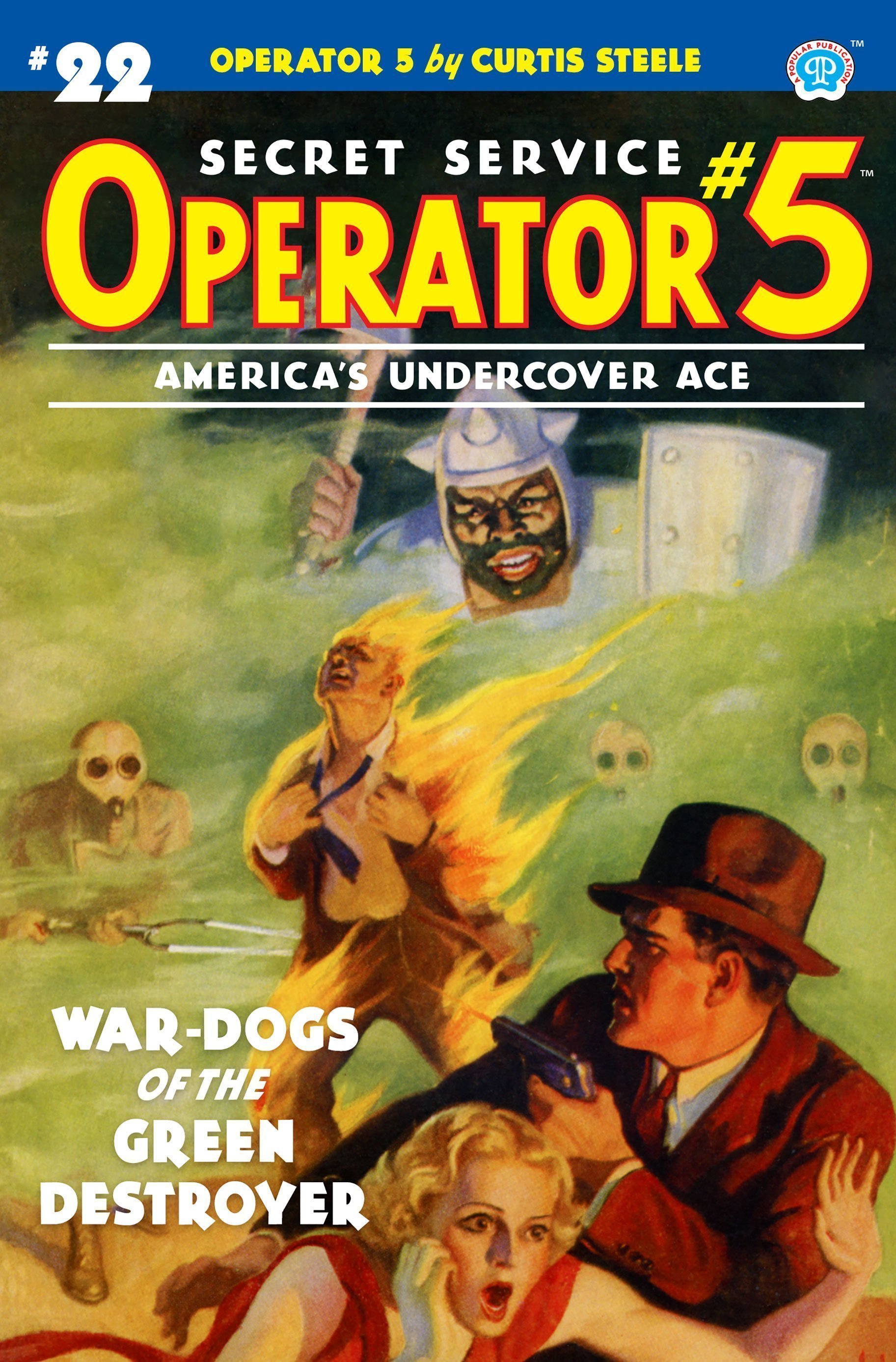 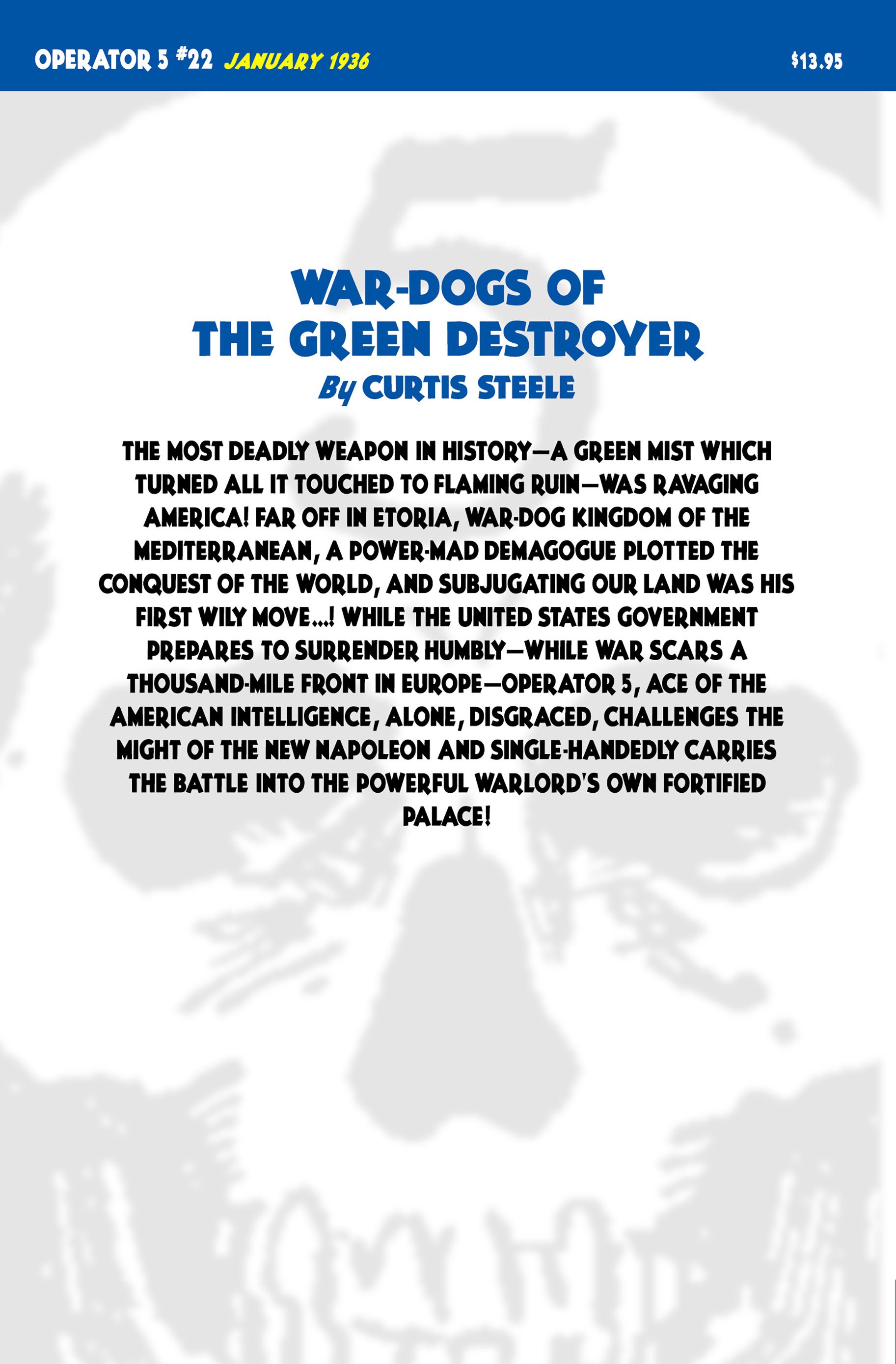 Be the first to review “Operator 5 #22: War-Dogs of the Green Destroyer” Cancel reply

“War-Dog of the Green Destroyer” is the twenty-second Operator 5 novel, originally published in January 1936. This novel would appear to be Tepperman’s second contribution to Operator 5 magazine.

The enemy nation is Etoria, a “war-dog kingdom” of the Mediterranean. In the first sentences of the novel, we see the League of Nation declaring sanctions against the nation for military expansion in Africa, thereby starting a “second world war.” Etoria must be modeled off Italy given that:

Etoria has a secret and extremely effective weapon, a green fog or haze emitting lightning that ignites fire on anything it touches. Wisely the US wishes to stay out of the war, but Etoria has different ideas. Its attacks on the US began by destroying US sea vessels with its green fog. Etoria’s goal is to eliminate America’s ability to support the war in Europe by destroying its shipyards, arsenals, chemical plants, etc. It sends its haze weapon to ravish NYC in order to force American leaders to give up and destroy its war-making factories.

Operator 5 learns of a man in Etoria in the city of Naptoli (Naples?) who knows the secret of the green-fog weapon. With the American Secret Service having been destroyed in Etoria, he wants to fly over to learn this secret. However, the Secretary of State (who is somehow once again in charge of the Secret Service despite having been relieved of that duty at the end of “Invasion of the Crimson Death”—perhaps Tepperman did not read that one) forbids Jimmy Christopher from going to Etoria. Of course, he does anyway… as an outlaw.

Meanwhile the war in Europe is not going well. The British are defeated at Suez and withdraw beyond Gibraltar, giving the Etorians control of the canal and of the entire Mediterrean. The French withdraw 200 kilometers back from their frontier with Etoria, the Spanish surrender, and Allemania (French for Germany) signs a peace pact with Etoria.

As always, from the pit of defeat, Operator 5 rises and nearly singlehandedly saves the world from Etorian aggression. He rescues the inventor of the green haze, learns it secret, and escapes to France, where he organized a counterattack to Etorian forces. He shows the French how to neutralize the green haze, and personally bombs and kills the leader of the Etorian forces. Still an outlaw in the US, he is declared the “Savior of France” and offered asylum if the Americans do not relent.

Could Etoria have successfully waged war as indicated in this novel? Clearly, yes, if they had this destructive green haze or fog with its lightning. Unlike Frederick Davis, Emile Tepperman does not lay a foundation for his inventions. While the exploding bodies of the last issue were rather absurd, it would not have been difficult to “stretch” existing technology to provide some credibility to this new weapon.

Note: Donald E. Keyhoe would provide a basis in one of his Philip Strange stories later in 1936. He postulates a chemical that explodes on contact with humans, often causing the head to explode because it is the first body part contacted if the chemical is dropped from the sky, from #49 “Hellions of Headless Death” from September 1936.

Could Operator 5 have stopped the Etorian war machine? Again, yes, as described in the novel. Like Davis’ Operator 5, Tepperman’s Operator 5 is everywhere, doing all things. 100% accomplishment of all that he does is highly unlikely, but not impossible. Of course, it is not unusual for pulp heroes to lead charmed lives, such that Murphy Law has apparently been repealed for them.

A very enjoyable tale… and one that is very consistent with Davis. Tepperman seems to have followed Davis more consistently, despite the situation with the Secretary of State, in replacing him in Operator 5 than he did replacing Norvell Page in his first stint as Spider writer beginning later that year. Differences… certainly. Some examples include: