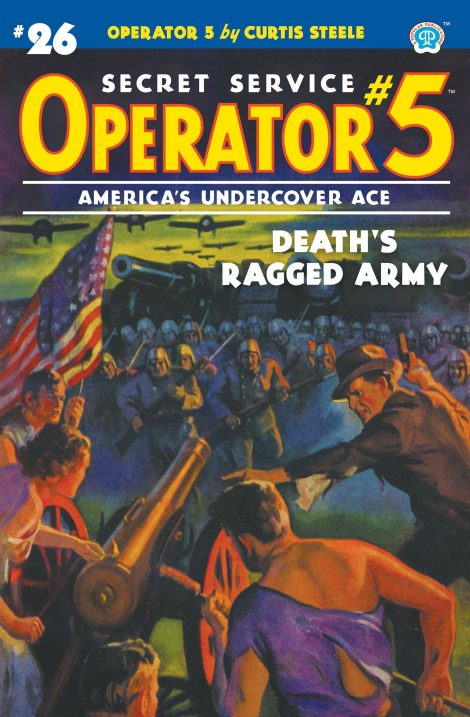 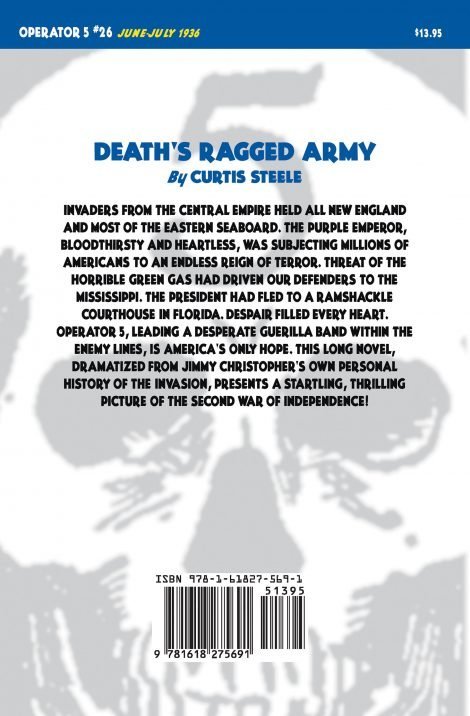 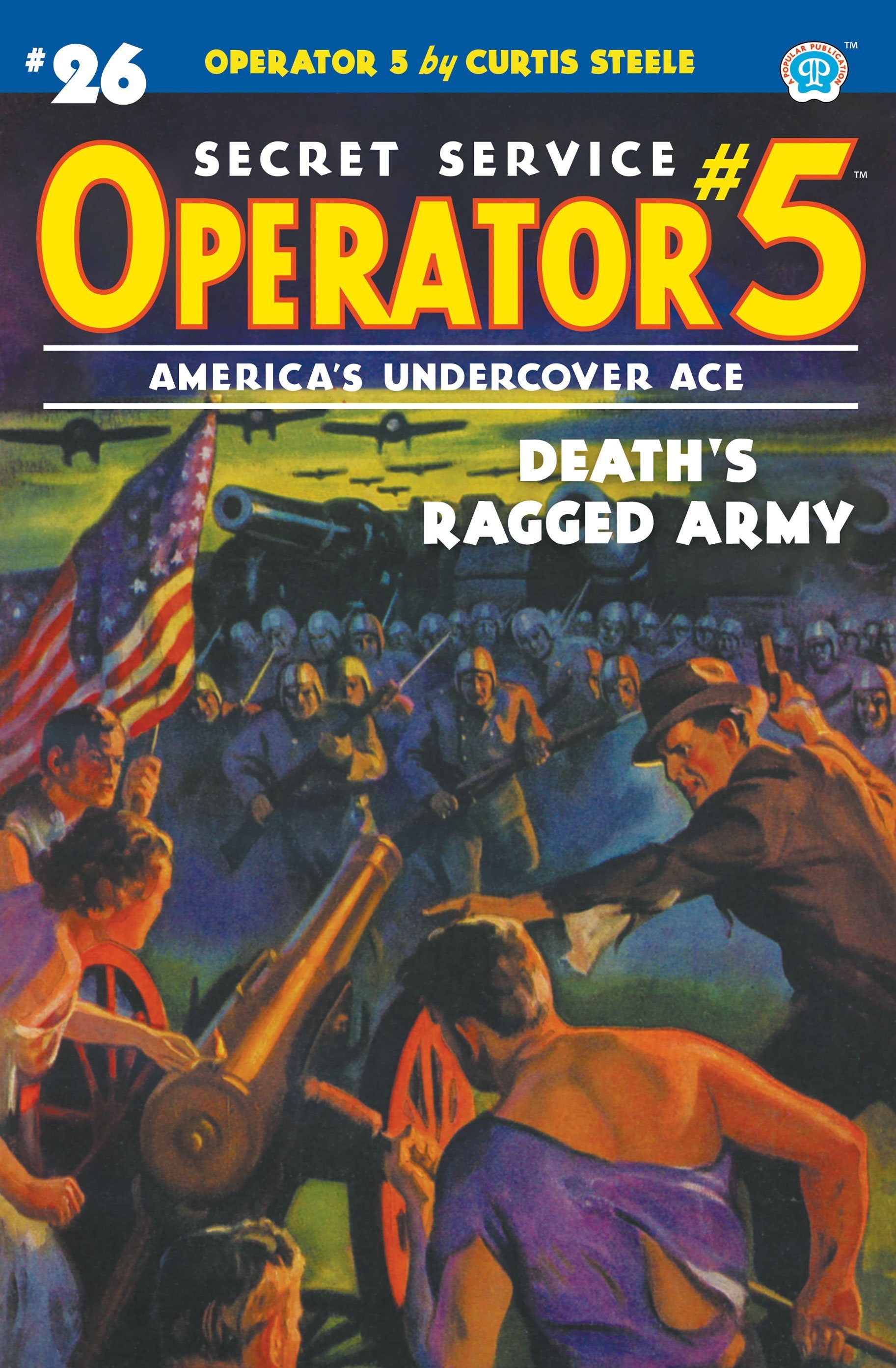 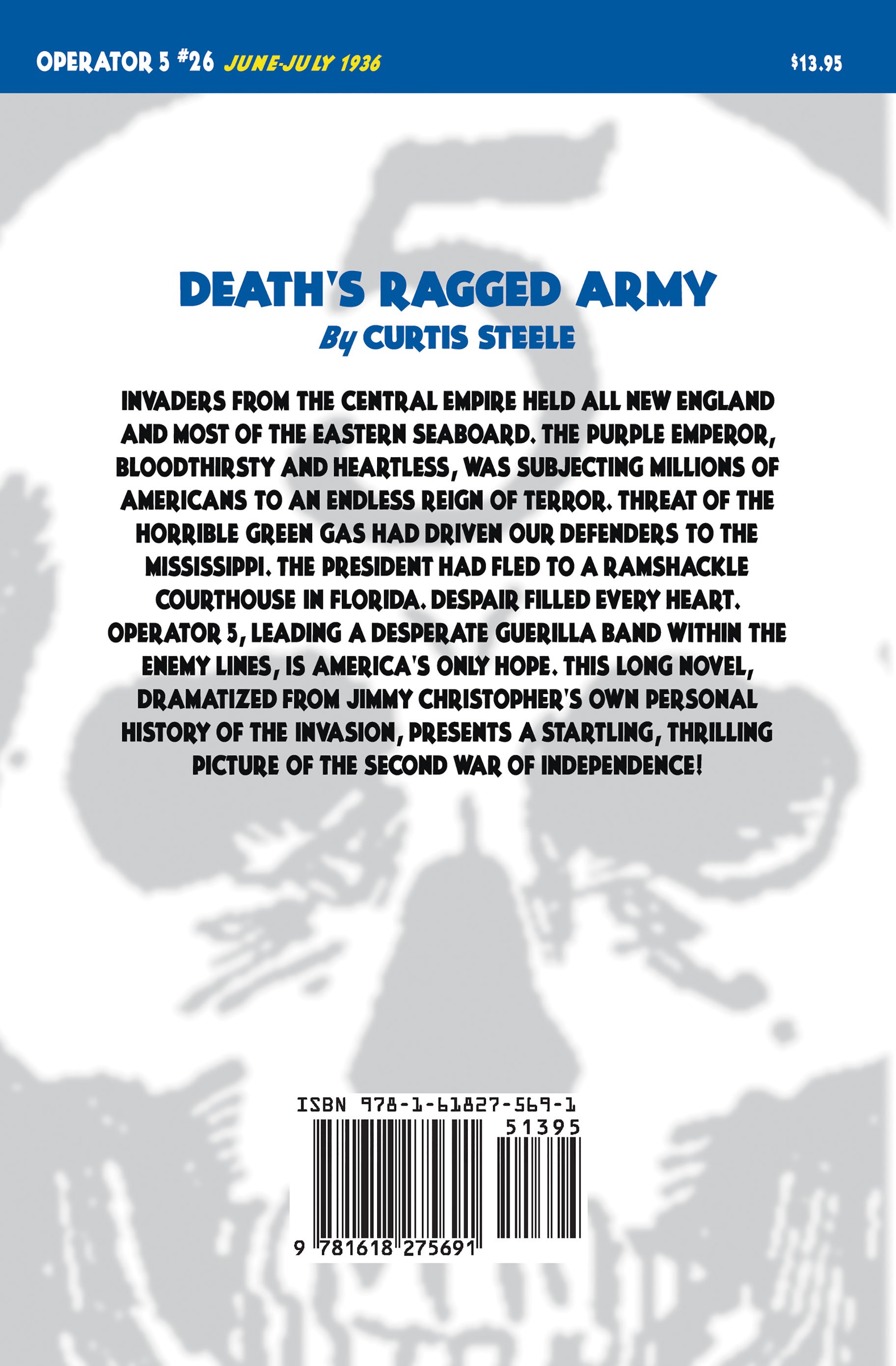 “Death Ragged Army” is the twenty-sixth Operator 5 novel, originally published in June 1936. This novel is the first of Tepperman’s 13 Purple Invasion novels. For some reason, probably sales, Operator 5 has now become a bi-monthly publication for the remainder of 1936, but will return to a monthly by early 1937.

While Frederick Davis might be the best of the Operator 5 authors, according to what I have read, but there is nothing quite like Tepperman’s Purple Invasion in pulp literature. It might not be the best Operator 5, but it is the most monumental… also the most impressive.

As with the last two novels, there appear to be a time lapse between this one and the previous. At the end of “Crime’s Reign of Terror,” Europe had still been a continent of apparently independent countries plotting against the United States. At the beginning of this one, Europe has been conquered by the Purple Empire and so has Canada. The US is suffering its 22nd day of attacks by the Central or Purple Empire (Note: It is called by both names); all of the northeast has been conquered, and Washington DC is besieged. We are not told how all of this happened, but we can surmise that it would likely take months if not years to occur. The two months since the last issue is too short for all of it to have happened without a time lapse.

Operator 5’s Minute Men are everywhere fighting a guerilla warfare against the Central Empire. Operator 5 is the empire’s most feared enemy. It fears him more than the entire American army fighting it.

The empire has its green gas as its greatest weapon of mass destruction. There are not countermeasures against the gas. Even gas masks are useless. It spreads in waves across the land killing everyone in its path and turning them purple or blue. It is a state secret such that no one knows the formula; the written formula is kept in a safe held close to the emperor. When more gas is needed, five chemistry students are selected; they mix up the gas, but then to their surprise and horror, they are beheaded to keep the secret of the gas. (Note: A footnote in a later Purple Invasion novel would indicate that 4,000,000 Americans were killed by the gas.)

The Central Empire has agreed not to use the gas in America if Operator 5 surrenders himself. Of course, it is a lie, but Operator 5 feels compel to comply. However, Plugger Dugan, a heavy weight champion, knocks out the agent, surrenders himself as Operator 5, and then assassinates the emperor before he can be terminated. The empire releases the chemical across much of the front blaming its use as revenge for what “Jimmy Christopher” has done.

When the real Operator 5 reports to the President, he is put under arrest. He will be court marshaled and then executed for allowing the green gas to kill thousands. Once again, as in previous issues, the arrested Operator 5 escapes, re-enters Central Empire-control territory, and destroys the formula. He returns to the President as a death sentence is announced against Z-7 for helping Operator to escape. Of course, everyone is ecstatic given that no more of the gas can be produced; at the same time a witness steps forward and tells of Plugger’s deeds, thereby exonerating Operator 5 even more.

Seeing his previous error and recognizing Operator 5’s ability, the President appoints him head of all American forces.

Could the Empire have accomplished this successful invasion of America? Certainly if it had already conquered Europe, much of Asia, and Canada. How it did there earlier conquests is a mystery to us. One would think that the US would have sent forces to Canada to stop the invasion, but again we have no data on this.

Could Operator 5 have accomplished what he did in this novel? Doubtful. It is hard to imagine that there would only be one copy of the green-gas formula in existent. Even an incompetent ruler would have had another locked away somewhere, perhaps in the deepest, darkest hole in Europe, as backup.

Overall, this is a very well developed novel despite odd plot props, such as there being only one copy of the formula or the Emperor choosing to be in war-torn America. It is perhaps the best pure novel that I have read from Tepperman. So, I am looking forward to the next one.

Comment on the Central Empire: Balkaria was apparently a small country in Central Europe that somehow quickly conquers Europe and much of Asia. Most of the names of Purple Empire people in this novel appear to be German-derived. If the Austro-Hungarian Empire, or perhaps the Prussian Empire, was still in existence, I would guess one of these served as its basis. The empire does not sound like Hitler’s Germany. In editorial-like comments in the magazine, but not in the actual Operator 5 story, there has been much discussion of Hitler and Germany… so Tepperman would presumably have had a lot of information on the Nazis, and this does not sound like them.

The Spider #44: The Devil’s Pawnbroker

The Spider #45: Voyage of the Coffin Ship