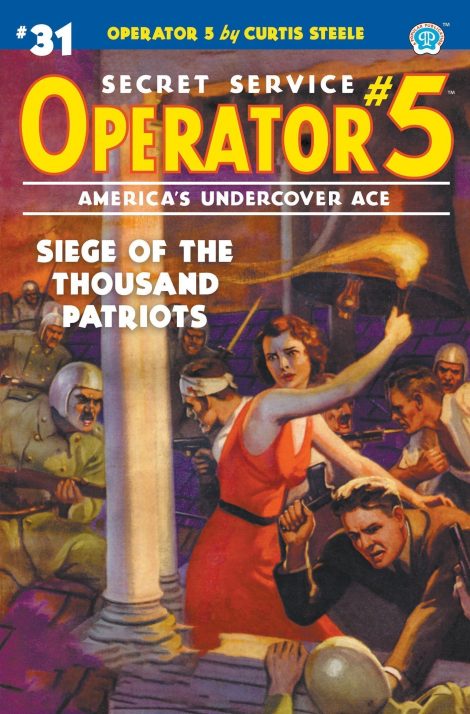 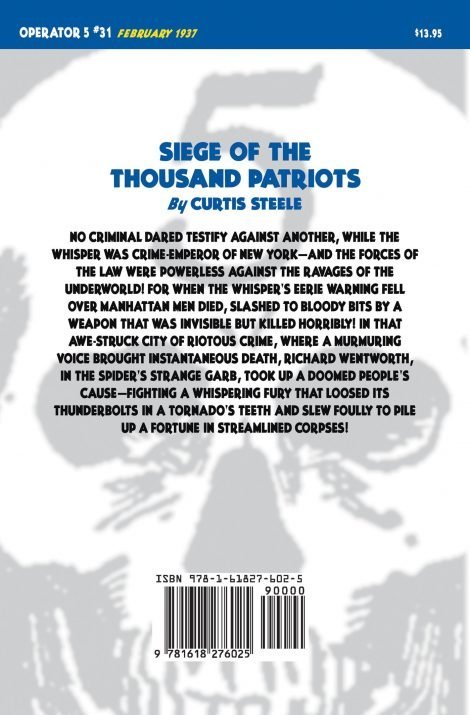 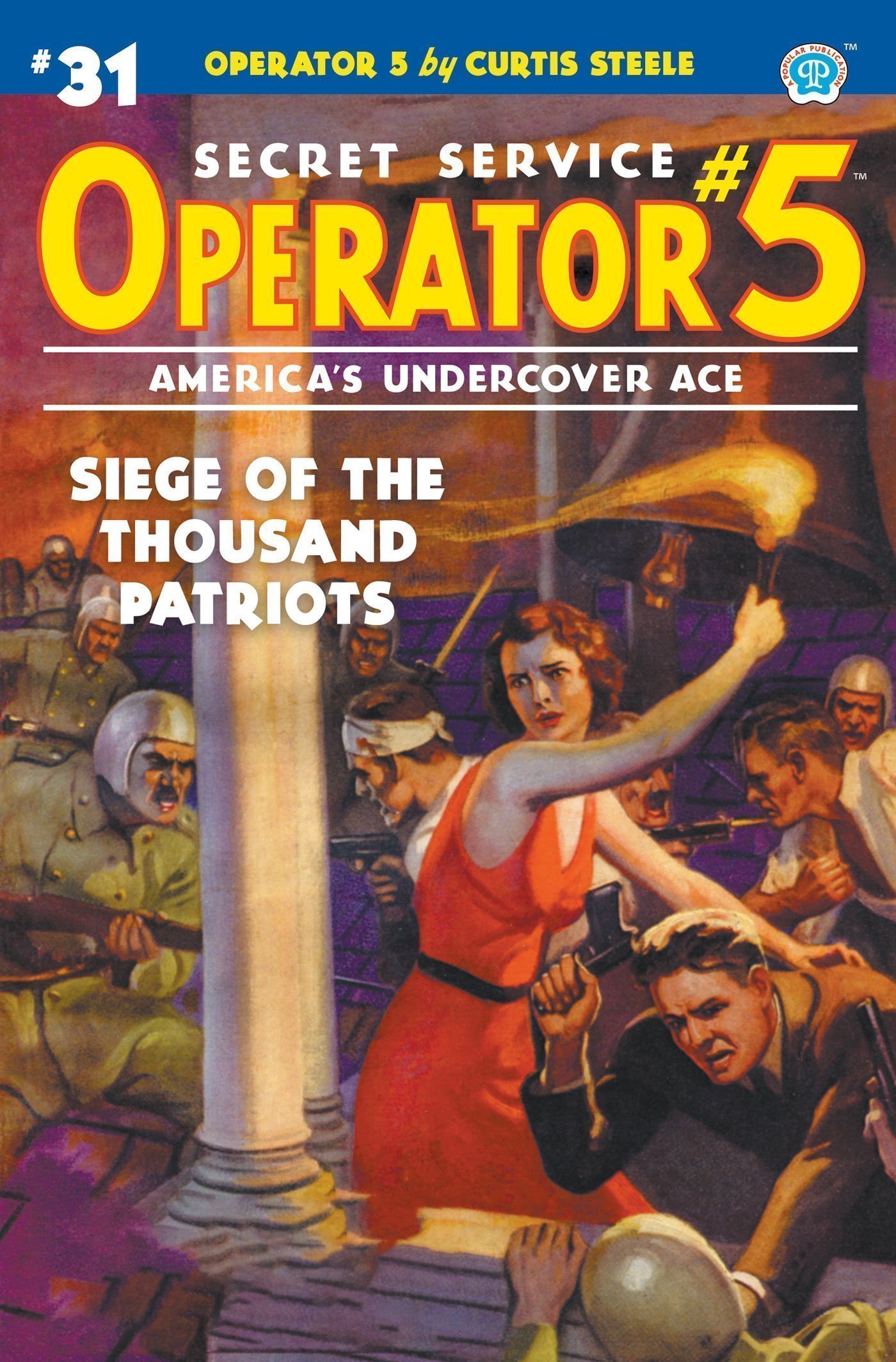 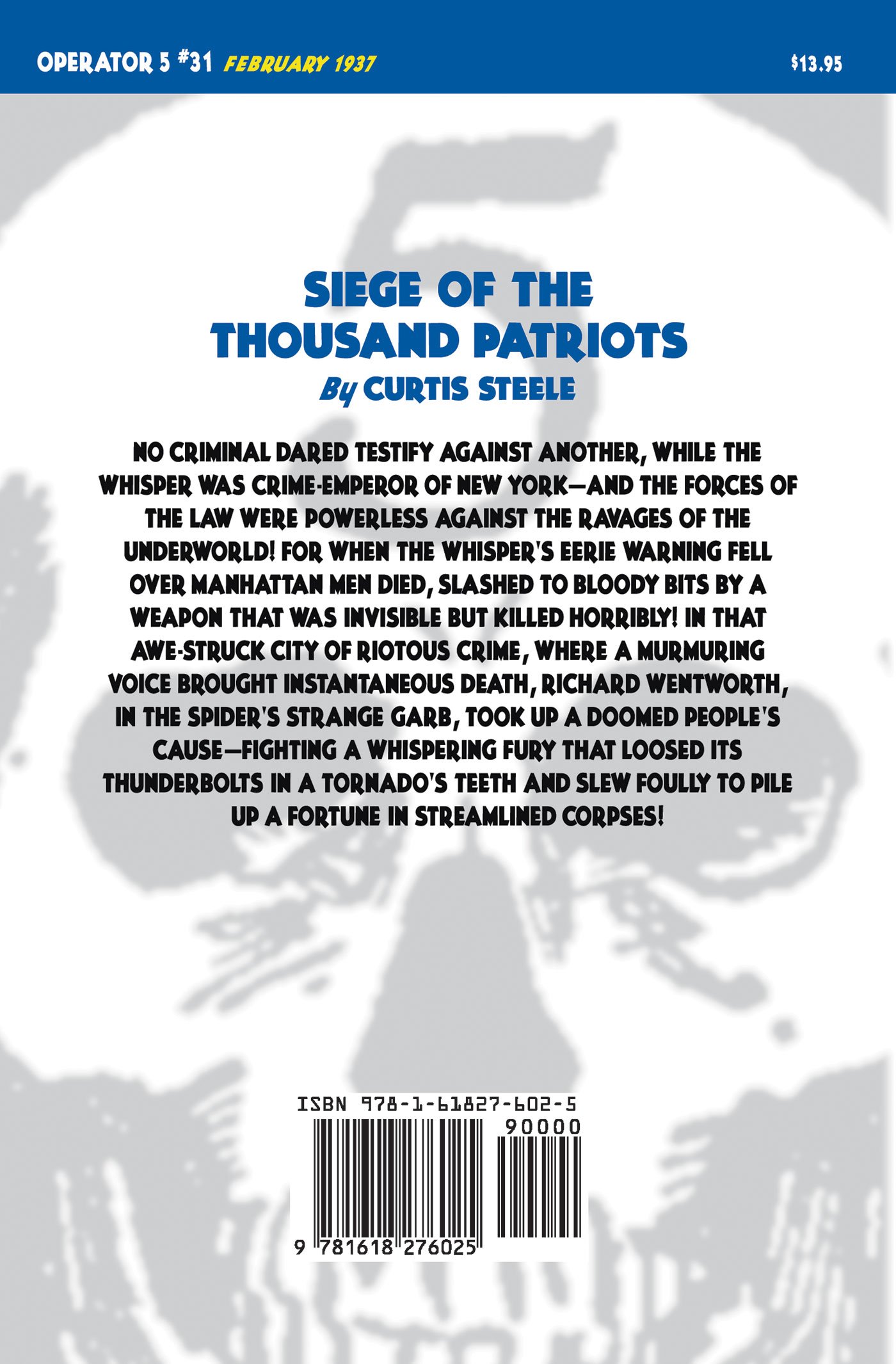 Over the Rockies and down the Pacific slope the Purple Emperor’s great war machine rolled on, to crush the last vestige of American resistance. Operator 5, seeing his cause already lost, decided upon the incredibly daring, typically American action—of a counter attack! Read here of his mad, secret sortie through enemy territory—across two thousand miles of hell to the guns and ammunition which alone could stave off defeat.

Over the Rockies and down the Pacific slope the Purple Emperor’s great war machine rolled on, to crush the last vestige of American resistance. Operator 5, seeing his cause already lost, decided upon the incredibly daring, typically American action—of a counter attack! Read here of his mad, secret sortie through enemy territory—across two thousand miles of hell to the guns and ammunition which alone could stave off defeat.

Be the first to review “Operator 5 #31: Siege of the Thousand Patriots” Cancel reply

“Siege of the Thousand Patriots” is the thirty-first Operator 5 novel, originally published in February 1937. This novel is the sixth chapter of Tepperman’s 13 Purple Invasion novels.

The bleak picture for Operator 5 and all-American patriots has gotten bleaker. The Central Empire has overrun many of the defenses in the Rockies that have been serving as a last bastion for free America. With American troops out of ammunition and retreating on apparently all fronts, Operator 5 hits on a desperate solution for staving off total defeat.

The Central/Purple Empire is starting to use a very lightweight, much stronger alloy called ransomite, which was invented by an American. The metal allows for long-range artillery batteries that can withstand much greater pressure. Even when huge, they are light enough to transport easily. An earlier version has already been used in limited quantities to dislodge American troops in the Rockies, but now the third version is about to be release and will be used to construct numerous Big Berthas. The inventor and other American slave laborers must do the bidding of the empire or have their children disembowel with Purple bayonets.

Operator 5’s plan is to go behind enemy lines and foment rebellion in 24 cities simultaneously. This will cause Purple troops to be reallocated to put down the revolts, thereby removing troops from the front fighting the Americans who are still free. It will also give Operator 5 a chance to take the Pittsburgh area, hold it, and procure the newly innovated weapon for American while depriving the empire of them. The strategy means certain death for the patriots in the other rebelling cities, but they want to fight back even in the face of certain death.

And the plan works! An assist comes when a division of Canadians arrived in the USA to help with the fighting. Operator 5 goes to meet them and to lead them to Pittsburgh, while Tim Donovan and other fighting Americans in Pittsburgh fortify on Mount Washington overlooking the city with captured ransomite artillery. While Operator 5 is in route back to the city, the empire surrounds the mountain with 20,000 troops. Unfortunately for them, their besieging positions are outside a large dam constructed earlier by the empire. The Americans use their “Big Bertha” made from an earlier version of ransomite to destroy the dam. The released torrents of water destroy the empire’s troops…all 20,000 of them.

Meanwhile a new problem arises, the use of a new, and once again secret, ordinance apparently made at Skoda, presumably somewhere in central Europe. (Note: Skoda factories actually did produce ordinance in the real WW II for the Germans. So perhaps Tepperman was alluding to that company’s capabilities. They are based in today’s Czech Republic.)

Could the empire have succeeded as indicated in this story? Again, it has more failures than successes, but its relentless continual paring away of American-controlled territory seems reasonable, given its mass of troops and more-advanced weaponry.

Could Operator 5 have provided the countermeasures as indicated in this one? Given he had 100% success, then yes. However, the Canadians invading the empire in the US seems highly odd, especially since they had also been invaded by the Purple Empire.

A generally good novel. The Americans are basically holding on by force of will and with great sacrifice. The reader feels these emotions. I must admit there were several times while reading this one that I wanted to stand up and salute Operator 5!

Operator 5 #24: War-Masters from the Orient