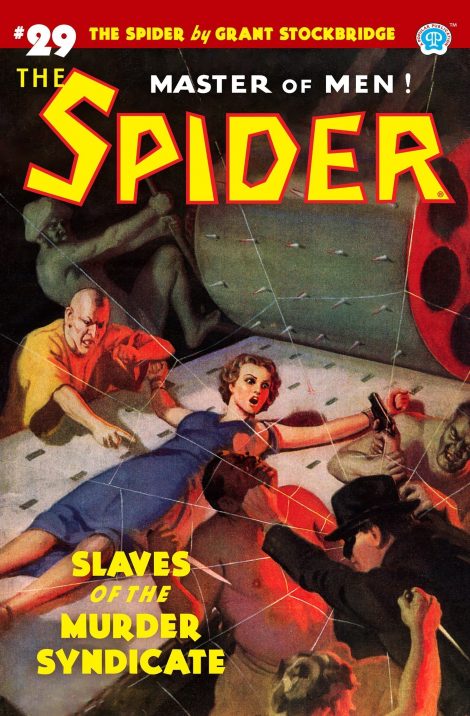 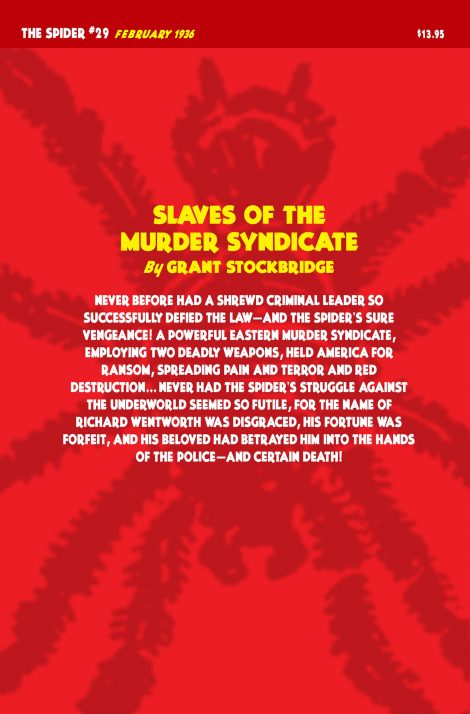 The Spider #29: Slaves of the Murder Syndicate 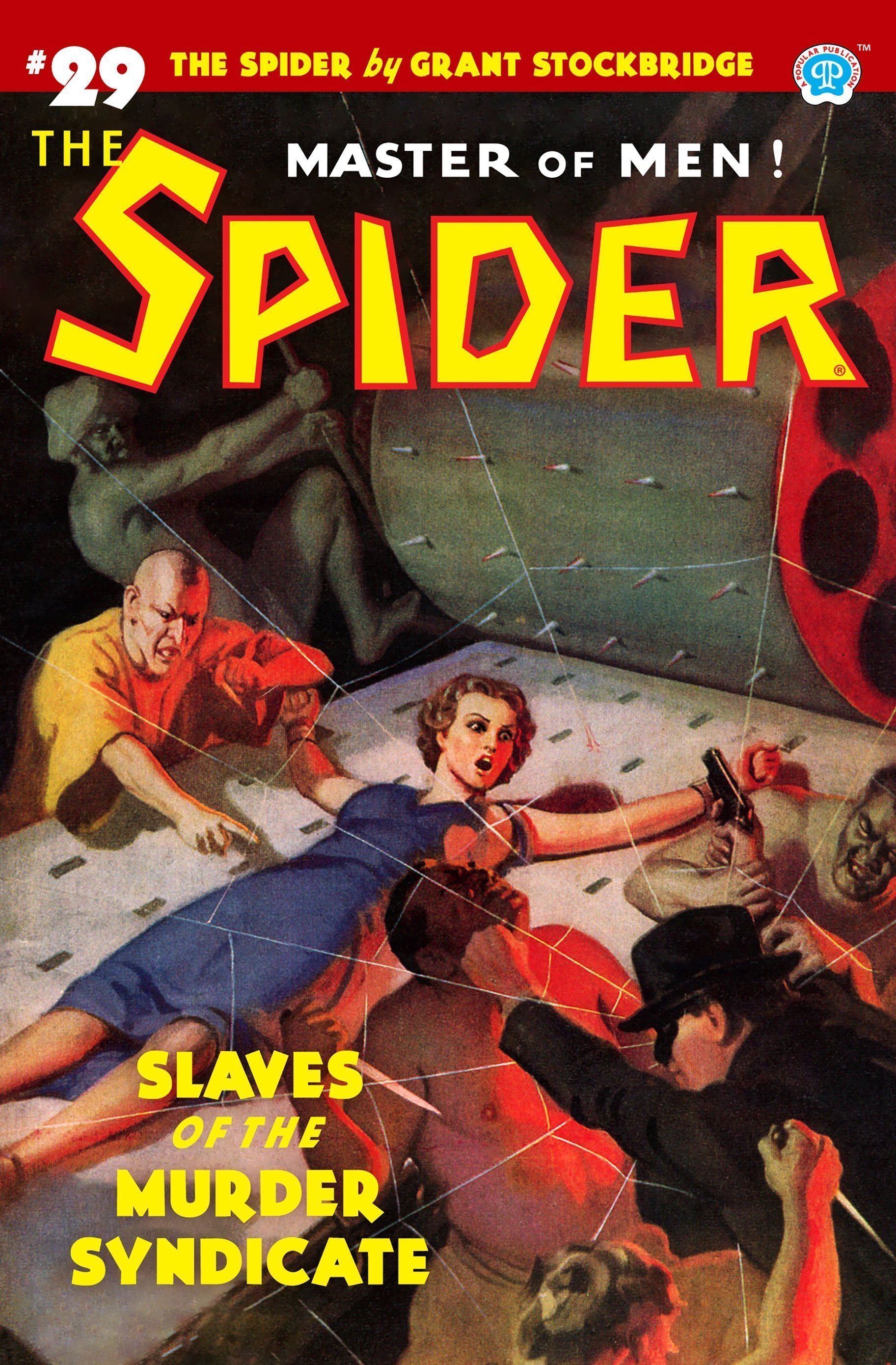 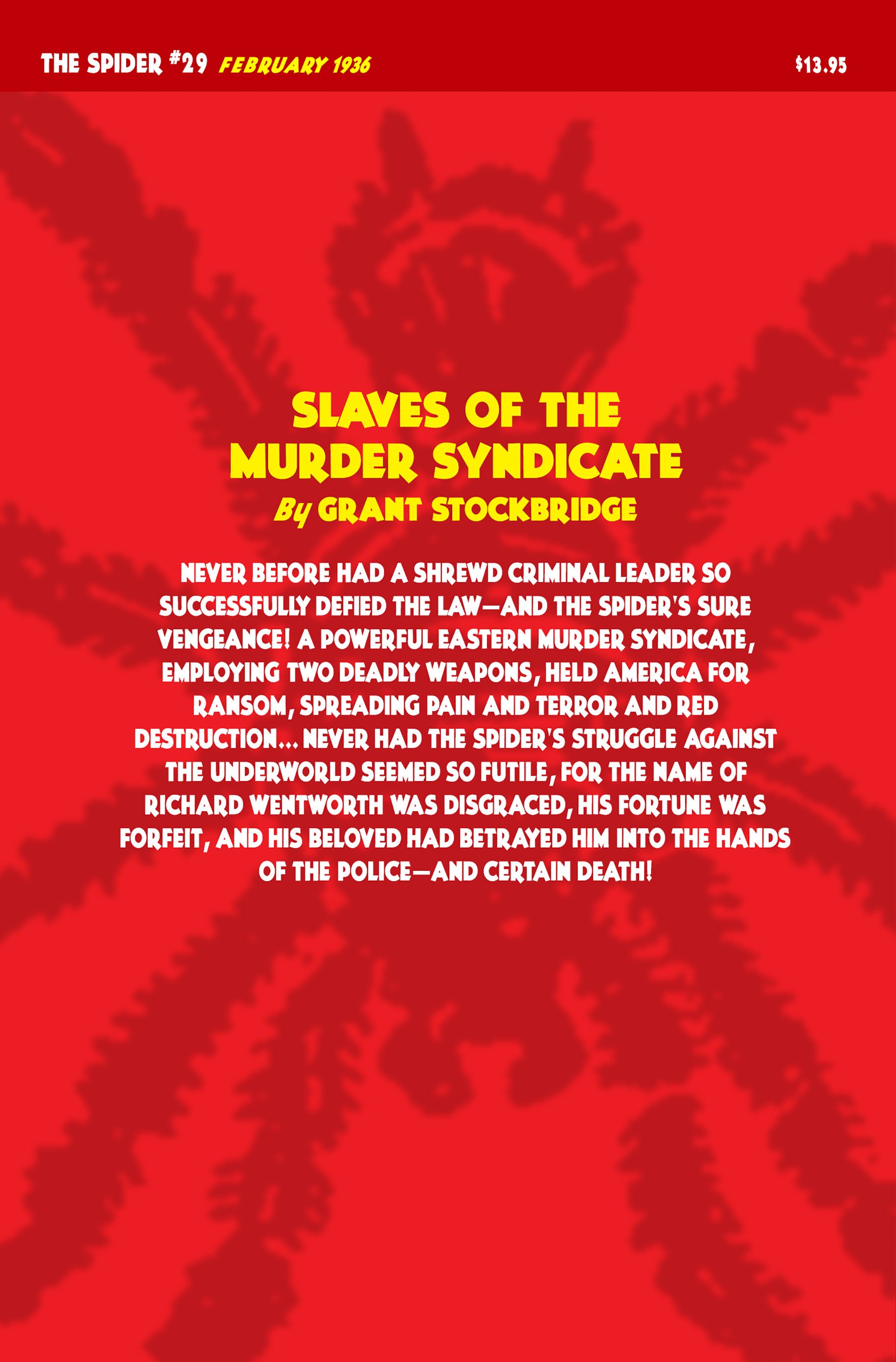 The Spider #29: Slaves of the Murder Syndicate

Never before had a shrewd criminal leader so successfully defied the Law—and the Spider’s sure vengeance! A powerful Eastern murder syndicate, employing two deadly weapons, held America for ransom, spreading pain and terror and red destruction… Never had the Spider’s struggle against the Underworld seemed so futile, for the name of Richard Wentworth was disgraced, his fortune was forfeit, and his beloved had betrayed him into the hands of the police—and certain death!

Never before had a shrewd criminal leader so successfully defied the Law—and the Spider’s sure vengeance! A powerful Eastern murder syndicate, employing two deadly weapons, held America for ransom, spreading pain and terror and red destruction… Never had the Spider’s struggle against the Underworld seemed so futile, for the name of Richard Wentworth was disgraced, his fortune was forfeit, and his beloved had betrayed him into the hands of the police—and certain death!

Be the first to review “The Spider #29: Slaves of the Murder Syndicate” Cancel reply

At the beginning of the “Mayor of Hell,” Wentworth/Spider loses everywhere thing, and must fight back from the brink.  He rescues Nita from yet another kidnapping, and reinstates Kirkpatrick as Chief of Police in NY City as he defeats the evil mayor. However, his fortune is still confiscated, plus Jackson and Ram Singh are yet in prison. At the beginning of “Slaves of the Murder Syndicate,” Nita and Kirkpatrick turn on Wentworth pushing the man back to the brink, even as a new threat begins looming over the city.

“Slaves of the Murder Syndicate” is the 29th Spider novel from February 1936. The “Chief” is the head bad guy; his followers appear to be Hindus, although they could just as easily have been Bantus for all the cultural and ethnic color that they bring to the pages; oh yes, there is Kali, but again, this Goddess could have been changed to some other God or Goddess without much change to the plot. Sadly Ram Singh is in Sing Sing (Sing, Singh, Sing) for most of this story; it would have been interesting to see him involved with people from his country… but that would have forced Page to have a little better understanding of Hindu/Sikh ambiance.

The main tool of the bad guys is the dissolver that actually dissolve people entirely, and of course, many get this treatment as this tale progresses. They also employed the “Dancing Death” where poison from a kalidart causes one to start twirling in circles until eventually death occurs. They use these tools to facilitate horrific robberies leaving only death behind.

The Hindu moll is Tarsa, a beautiful temptress. I had thought that the Spider might interact more personally with her in this story given that he was on the outs with Nita… but alas, no sparks!

Eventually in trying to escape the police, the Spider is shot, but this seems to unleash the tide that will bring him victory. Showing her love for her man, Nita shoots the policeman (but does not kill him), and then somehow escapes to Florida in a car with his wounded body. Wentworth returns to the battle, but is captured by the Chief. With no one else to help, Nita dons the Spider outfit for the second time in the series (the first being in “The Master of the Death-Madness”) and once again saves her man. What a gal!!!!!!

Fortunately Kirkpatrick sees Nita in the guise of the Spider rescuing Wentworth, thereby “proving” that Wentworth is not the Spider. What a fickle mind Kirkpatrick must have! So, he proclaims Wentworth innocent, thereby also declaring the innocence of Ram Singh and Jackson. Wentworth’s great wealth is returned. All is once again as it had been at the beginning of last month’s tale “The Mayor of Hell.” The Spider might not be happy, but he is back from the brink.

This novel has almost everything in it that we have seen before, including oodles of fast-moving, gory action. Indeed, if someone picked up it and started reading, having never read a Norvell Page story, they would likely be wowed out of their mind. While the “Slaves of the Murder Syndicate” has about everything in it, those who are reading these magazines in order, we have already seen similar events transpire in earlier issues. In other words, this novel is a collection of derivatives.

One pet peeve: Wentworth seems to spend a lot of time in this one especially toward the end agonizing over his relationship with Nita. Because he is a crime fighter, he does not want to marry her and subject her to such a life.  Silly thinking!!! She is already heavily involved as this novel points out and as nearly every Page novel before this one has already done as well. If he really loves her, he should marry her and stop all that false whining about not wanting to subject her to the life that he lives.