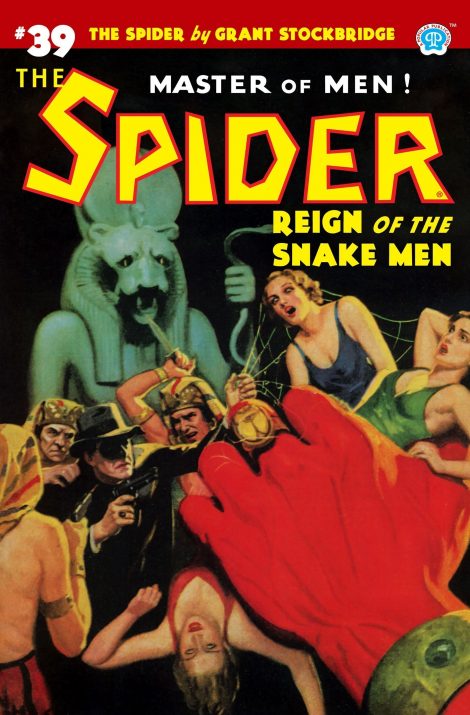 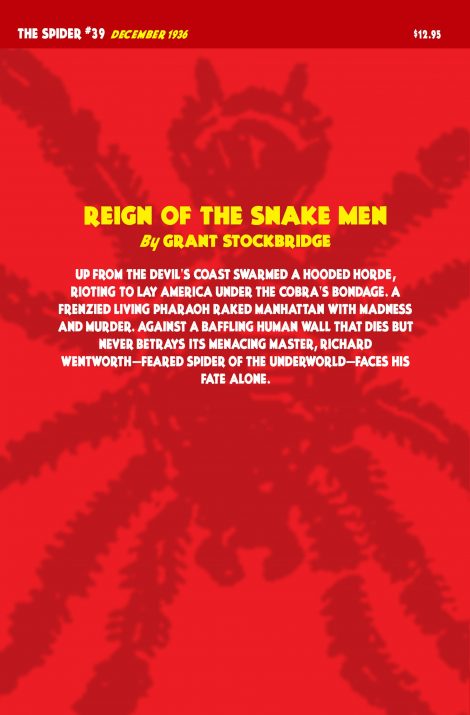 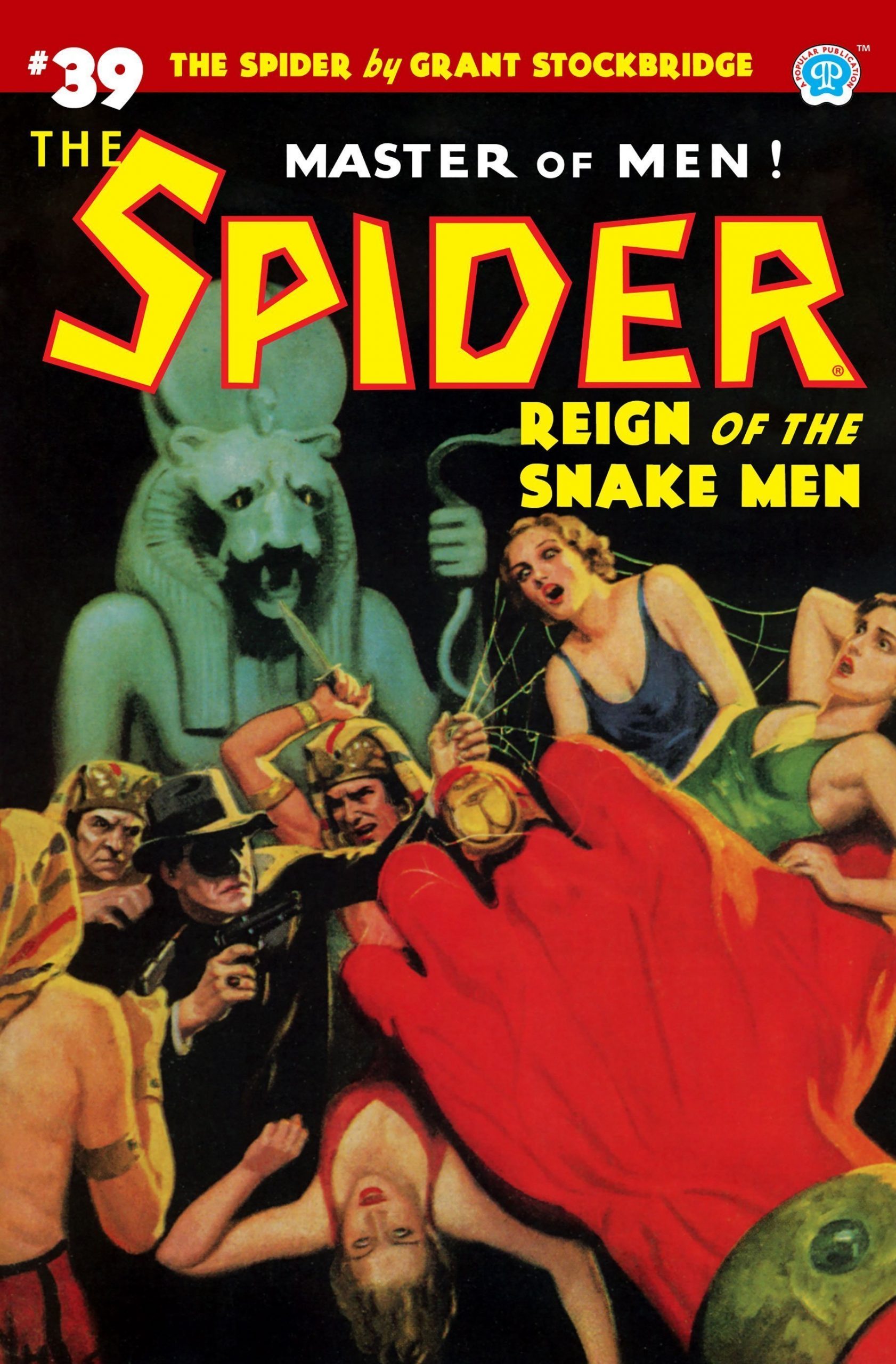 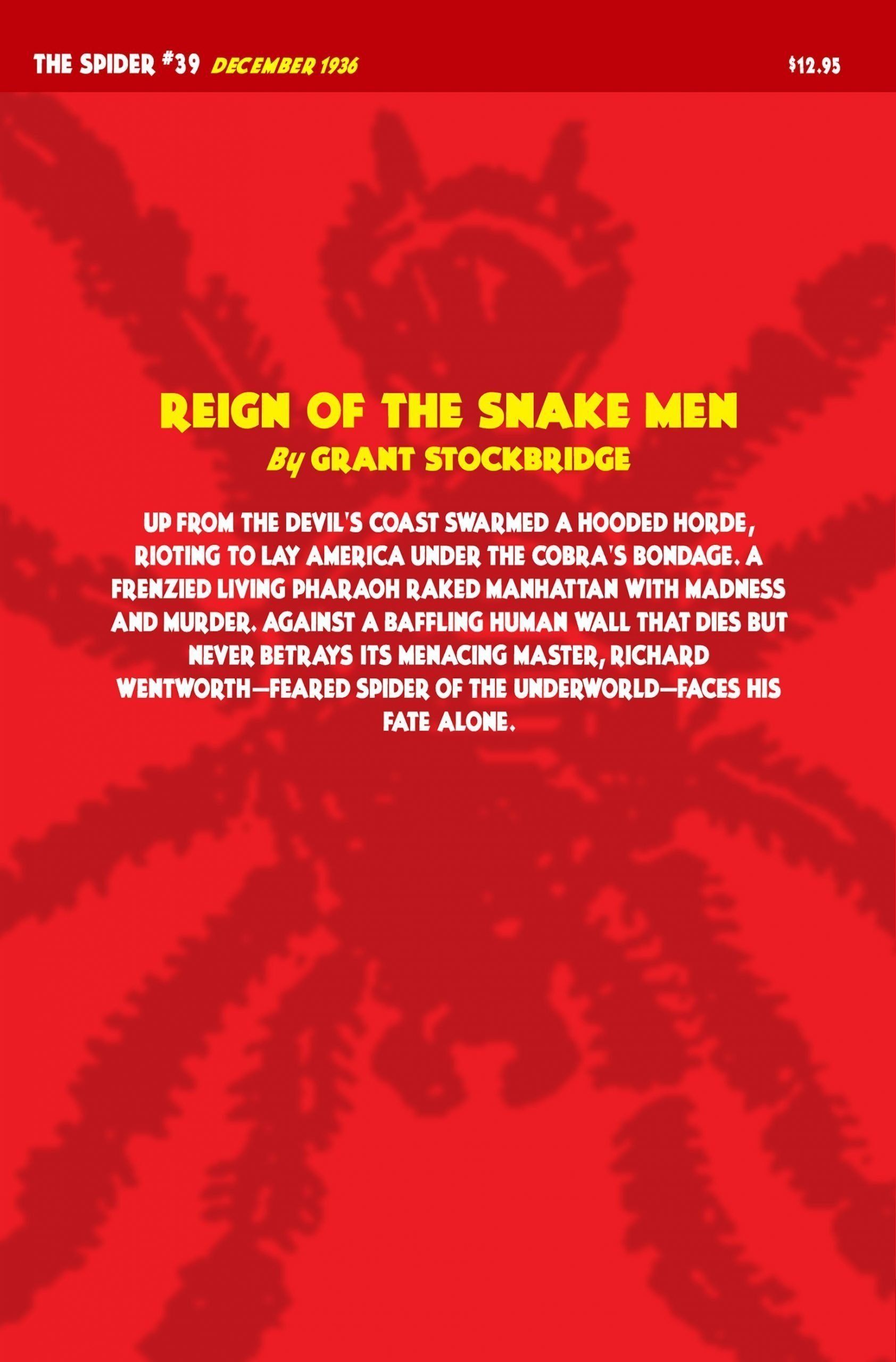 Up from the Devil’s Coast swarmed a hooded horde, rioting to lay America under The Cobra’s bondage. A frenzied living Pharaoh raked Manhattan with madness and murder. Against a baffling human wall that dies but never betrays its menacing master, Richard Wentworth—feared Spider of the underworld—faces his fate alone.

Up from the Devil’s Coast swarmed a hooded horde, rioting to lay America under The Cobra’s bondage. A frenzied living Pharaoh raked Manhattan with madness and murder. Against a baffling human wall that dies but never betrays its menacing master, Richard Wentworth—feared Spider of the underworld—faces his fate alone.

Be the first to review “The Spider #39: Reign of the Snake Men” Cancel reply

“Reign of the Snake Men” is the 39th Spider novel and was originally published in December 1936. This story is Emile Tepperman’s second consecutive Spider tale in the string of eight that he will write. It is also the fourth and final installment of the Pharaoh stories.

At the beginning of the novel, we are reminded that Wentworth and Kirkpatrick are still wanted for murders having been framed by the Pharaoh earlier; so for the first order of business, Wentworth breaks Kirkpatrick out of police custody. Apparently the Pharaoh is once again starting operations in NYC, following reports of a mass-prison breakout in Cayenne, Guyana and the destruction of a leper colony close by. Both the escaped prisoners and lepers are coming to help out the Pharaoh’s protection racket is successful in the Big Apple.

Several of the initial chapters are devoted to the lepers attacking a department store inflicting a fast-acting stain of leprosy on the mainly women shoppers in the store. They attack the store en mass, marching into it even as the police and Wentworth are gunning them down. They have no fear of death because the Pharaoh has promised to resurrect them after they are killed and to give them disease-free bodies. So, for them, the quicker they die, the quicker they will be rewarded.

Following the department-store raid by the lepers, the police attempt to apprehend Wentworth, which results in a frantic chase. Meanwhile Nita is attacked by snake-men, the escaped prisoners with turbans, cobras displayed on their chests, and live cobras, but she is saved by Chinah Sind, a bald, big-headed, no-legged, one-armed man whose body has been ravaged by the Pharaoh. When Wentworth escapes and joins Nita, Sind helps him devise a plan to end the Pharaoh for all time.

Sind decorates Wentworth as one of the lepers drawing a snake on his chest and acquiring the clothing of one of the dead lepers. Then the two of them enter the Pharaoh’s lair. By the time that they arrive, Nita has once again been kidnapped and is already there. Despite Sind being a traitor, Wentworth’s deception works anyway. By it, he is able to get close enough to the Pharaoh and his entourage to kill them with gas. There will not be a resurrection this time!

All is then righted, including:

A pleasing novel, and certainly better than many of Page’s 1936 tales. More predictable, but still a lot of action squeezed into a short time period. Unlike Sampson’s review in Spider, I did not see changed interactions between Wentworth and his cohorts/helpers, but then these interactions were minimum in this novel.

This novel is highly recommended to Spider fans. Although it is the fourth of the Pharaoh novels, each of them is a stand-alone story, and this is best of the four. So, if you want, you can read it without reading the other three and still thoroughly enjoy it.

The Spider #44: The Devil’s Pawnbroker