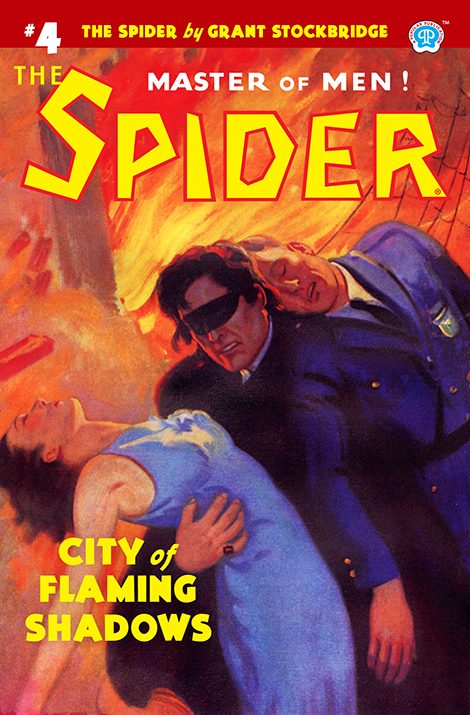 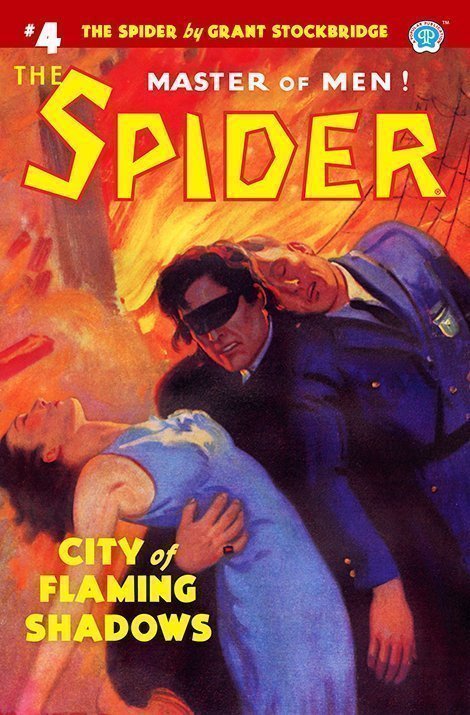 Be the first to review “The Spider #4: City of Flaming Shadows” Cancel reply

“City of Flaming Shadows” is the fourth Spider novel, and the second by Norvell Page. It was originally published in January 1934.

Internal in the magazine, months have passed since the events in “Wings of the Black Death” until the start of “City of Flaming Shadows,” although “Shadows” was published only one month later (December 1933 to January 1934). Apparently, Wentworth had not needed to deploy the Spider in this timeframe as no super villains had stepped forward, allowing Wentworth to entertain thoughts of settling down with Nina.

However, a bank robbery in Hamlettown in upstate NY stifles these thoughts. Somehow, criminals have been able to isolate an entire village from outside communications (telephones, alarms) and even dimmed the city’s lighting.  Tying into the community’s electrical system, the villains used a “flaming electrical torch” and cut through the bank vault as though it was paper. Many people are slaughter in the process. Knowing that this is a dry-run with a process efficient to rob the US Treasury, Wentworth is drawn to crime, readying the Spider for a comeback. Indeed, with the US recovering from the Great Depression, a few more bank robberies could easily cause a run on the many still-weak banks, once again plunging the economy into the depths of despair.

The head criminal is the Tarantula… yes, it is the Spider versus another spider. The Tarantula decides to get the Spider out of the way by identifying and killing him. A failed attempt leaves behind a dozen or so bodies, innocent bystanders and the men sent to kill the Spider. Nita is then kidnapped, and the game is afoot between the two arachnids.

Soon, President Roosevelt has closed all the banks in NY City, which would have included most of the major ones in the US, and many insurance companies are failing because of the Tarantula’s actions. Nita has her head in a noose struggling on tiptoes not to be strangled with the building in which she is located scheduled to be blown up within the hour. With the police misled and not listening to Wentworth, the Spider must stop the looting of the gold in the Federal Reserve Bank.

Of course, the Spider puts it all together to save the day!

“Shadows” is not as grandiose as “Black Death”; the stakes are only the American economy, and the death toll is only in the hundreds. Like “Black Death,” though, it is a great page turner.  You know that the Spider will prevail, but Page’s strong wording drives the story.  A great pulp read!

This story finally provides an explanation concerning the meaning of the “Master of Men” although the slogan has been used since the first issue. The Spider’s relationship with Jackson is also identified more fully. Indeed, given the months interlude between the first two Page stories, perhaps Scott was only intended to be a filler until Page had the concept more fully developed and to create an inventory of Page stories to assure no disruption in them. Page will write the next 33 Spider stories.