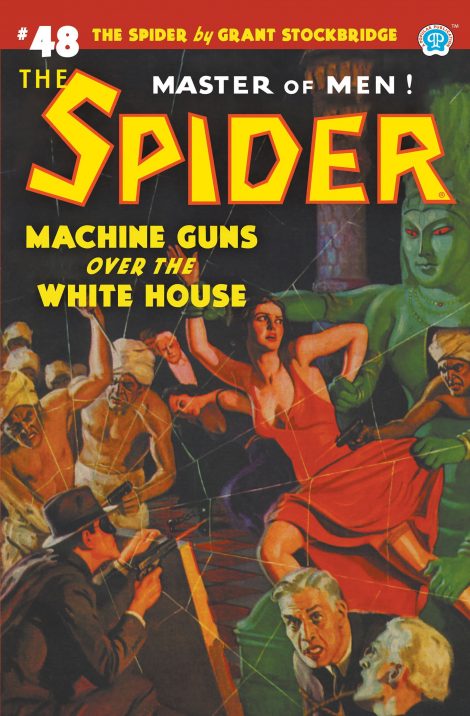 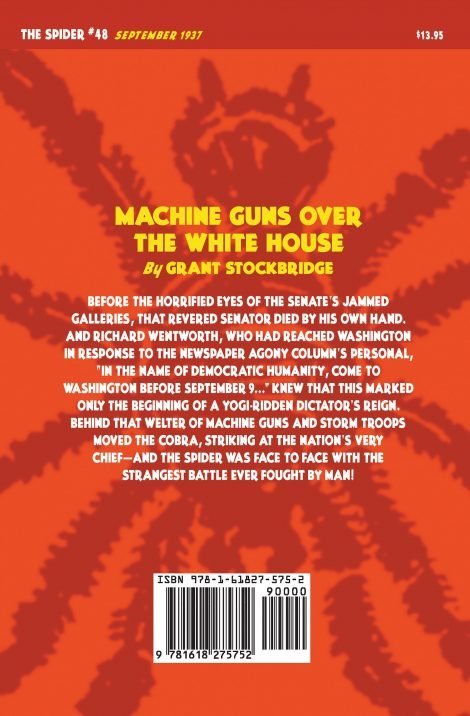 The Spider #48: Machine Guns Over the White House 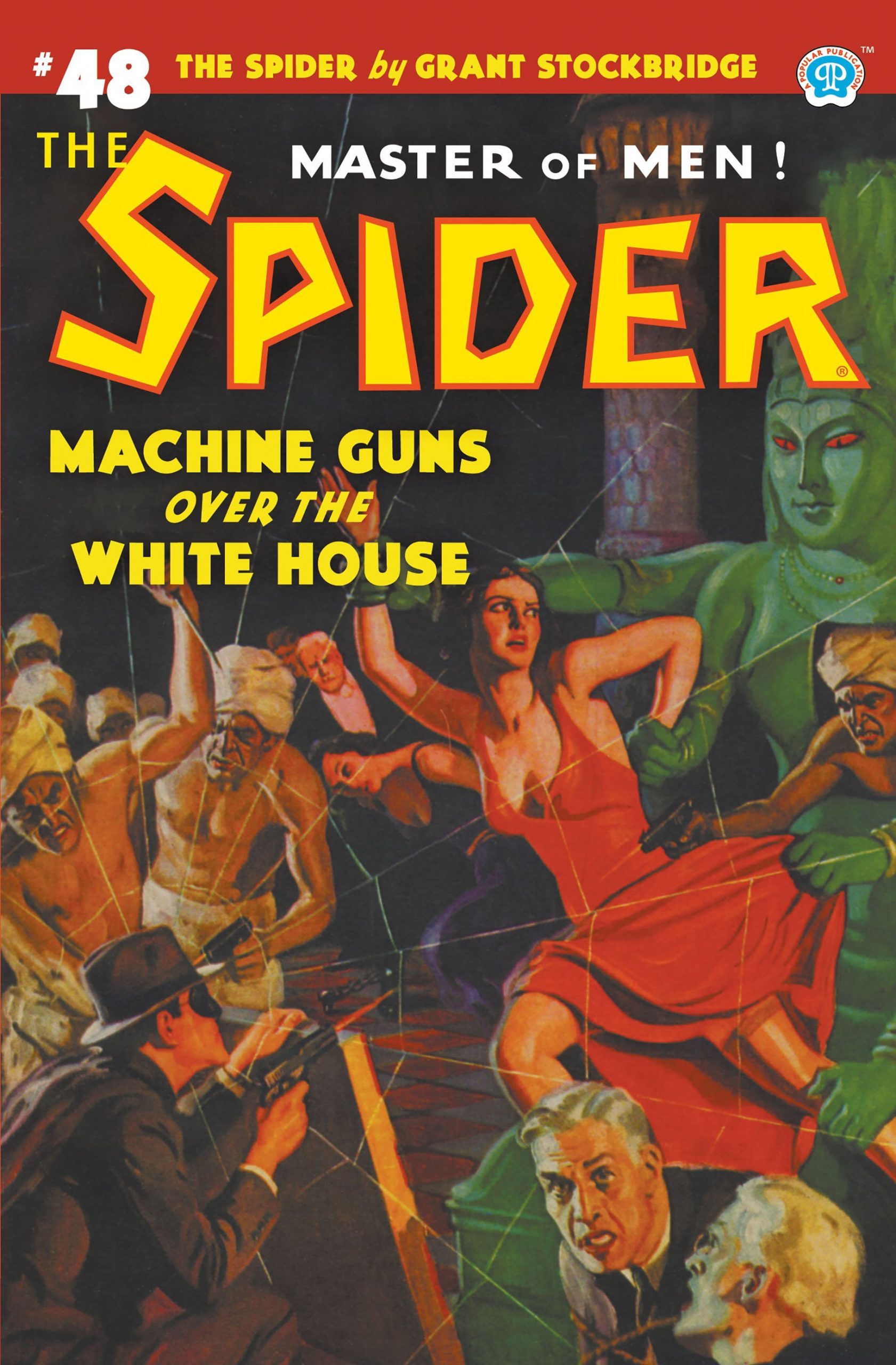 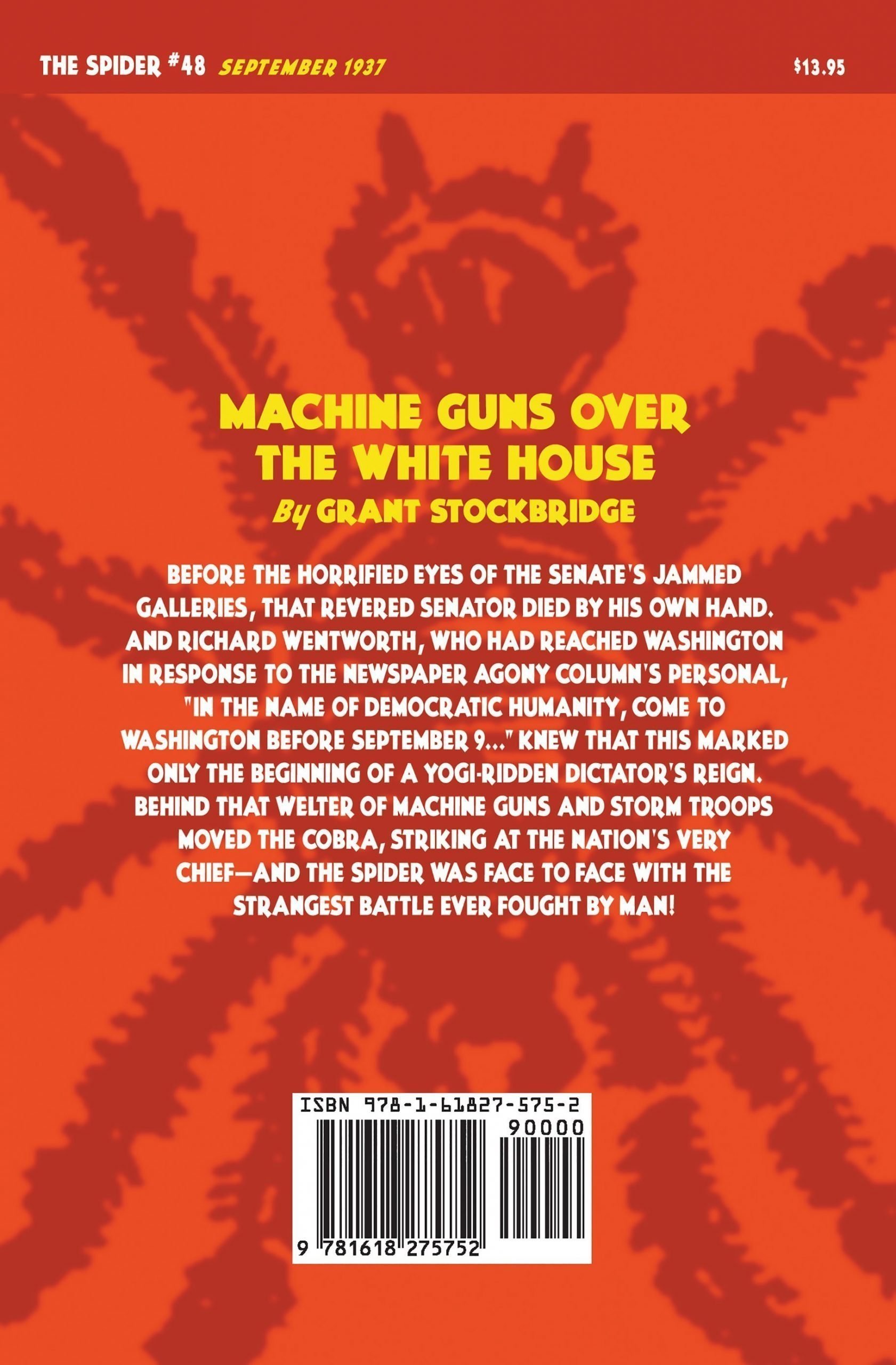 The Spider #48: Machine Guns Over the White House

Before the horrified eyes of the Senate’s jammed galleries, that revered Senator died by his own hand. And Richard Wentworth, who had reached Washington in response to the newspaper agony column’s personal, “In the name of democratic humanity, come to Washington before September 9…” knew that this marked only the beginning of a yogi-ridden dictator’s reign. Behind that welter of machine guns and storm troops moved the Cobra, striking at the nation’s very chief—and the Spider was face to face with the strangest battle ever fought by man!

Before the horrified eyes of the Senate’s jammed galleries, that revered Senator died by his own hand. And Richard Wentworth, who had reached Washington in response to the newspaper agony column’s personal, “In the name of democratic humanity, come to Washington before September 9…” knew that this marked only the beginning of a yogi-ridden dictator’s reign. Behind that welter of machine guns and storm troops moved the Cobra, striking at the nation’s very chief—and the Spider was face to face with the strangest battle ever fought by man!

Be the first to review “The Spider #48: Machine Guns Over the White House” Cancel reply

“Machine Guns over the White House” is the 48th Spider novel and was originally published in September 1937. This is Norvell Page’s second contribution after his return in 1937.

At the beginning of the novel, three individual odd threads appear, the first of which is the rise of Senator Roger Holme from Indianois (Indiana? Or maybe Illinois as Holme thinks that he is the “Spirit of Lincoln” or perhaps a composite of both as they are next to each other) from an obscure mayor to high level Senator. He is a law and order man, whose accusations are enough to drive crowds mad, such as when accuses the mayor of Indianois City (Indianapolis?, i.e. Indiana City) of being a crook resulting in him being lynched by a mod. Holmes wants the federal government to create a new cabinet post to be called the Department of Audit and Finance. Apparently it is to be his national platform to bring “law and order” to the US.

Second, there is a raft of unexplained Hindus who are up to no good. For example, one Hindu Rajput throws a krait, a poisonous snake, at Wentworth. It is also a Hindu that wields the first machine gun over the capitol. The plan behind Holme’s rise also uses Hindus as its muscle. Probably the best scene in the book is a Chief Justice of the US being torn apart by a 30-foot mechanical Shiva, with Wentworth next in line for the same treatment.

Third, there is a much death of up-level men, including a Senator who commits suicide, the very same man who has called the Spider to Washington DC to stop the horrors that are evolving to destroy the US as the land of the free.

Holme has many overly dedicated followers. A million men have donned green shirts to be his storm troopers, called the “Holme Guard,” under the banner of the “Sword of Justice.” The situation becomes so bad that the current President is threatened with lynching. Congress is intimidated into doing as it is told, and the Holme Guard becomes the official police force for the US.

Wentworth is wounded, given time for the evil to progress as he heals, a technique used earlier by Page. Eventually, Holme is on the eve of being certified as President, while the real President is holed up in the White House surrounded by marines, refusing to give up power despite being impeached, illegally

So, the Spider to the rescue. First, he enlisted the help of Roger Holme himself, who is apparently a good guy after all, only hoodwinked by those around him. Then General Spider/Wentworth leads the forces of good in the battle for the White House. Finally, he saves Nita, and another woman, who has been kidnapped (once again in this novel as in nearly all Spider novels); the two women were under the threat of death as a last gasp attempt to save the day for the secret leader behind a US dictatorship. The Spider saves the ladies and unmasks the secret leader, thereby ending all resistance to freedom once again reigning in the US.

At the end of the novel, the reinstated President pardons the Spider for all past crimes, calling him the true “Sword of Justice.”

I thought that this was a great Spider novel, harkening back to many of the best Spiders of earlier years. The plot might have been one more suitable to Operator 5, but the Spider handles it his way… in the frantic pace set by Page… where there is no respite from the action from beginning to end. I do not normally see this one listed as one of the best Spiders, but perhaps it belongs there. My guess is that it is overshadowed by the three-part story where a Nazi-like organization takes over New York state, which would be written by Page in 1938.