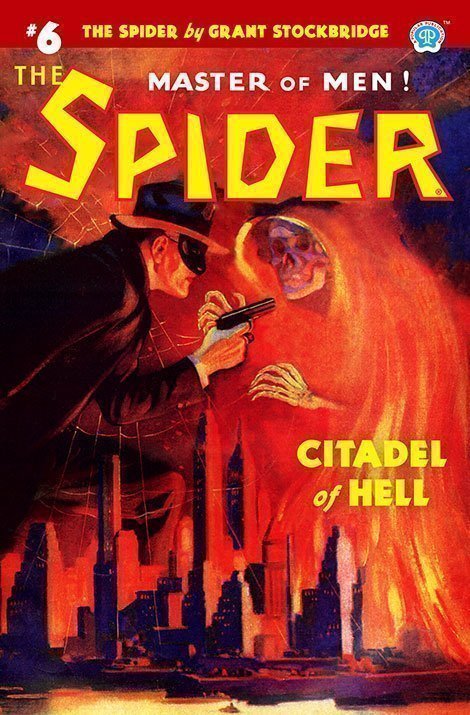 Be the first to review “The Spider #6: Citadel of Hell” Cancel reply

“The Citadel of Hell” is the sixth Spider story and the fourth by Norvell Page. It is also the first one where the Spider dons his full fanged costume… appropriately we are only a couple of days from Halloween. (My costume this year is a traditional Turki one… perhaps next year it will be a Spider costume.) Other originals with this issue are the first Spider-Kirkpartrick meeting, the first appearance of the Spider alias of Tito Caliepi the hunchbacked violinist, and the origin of the Spider ring. In the original issue, readers were given instruction on how they could get one; a young boy is awarded the first one in Chapter 11. “Tito” becomes the “look” to crime with a slouch hat, hunchback, and gray hair, the fangs being added later.

The bad guys are the Red Mask and the Food Destroyers. Their caper is to destroy as much of America’s food supply as possible so that the price of their stocks will soar to terrific heights, a crime that is especially horrible with the US deep in depression, and many citizens already going without food because they do not money to buy it.

After an initial engagement, he Spider is sidelined with an injury for three weeks. So the threat to the US food system becomes acute. One must admit that Page’s logic concerning this threat is a bit stretched. With all the food in the fields in the US, vast storage areas, and a large distribution system, there is no way that the organization destroying food as described in this story is sufficient for the task.

Another weakness with the series in general is the inability of the police to get adequate evidence to conflict Wentworth of being the Spider, despite constant accusations and occasional arrests. I guess the fangs will deceive the police in the future! If Superman could elude being “unmasked” sans spectacles but with a twirl added to his hair despite heavy suspicions, why not the same for the Spider?  Literary license. Actually, the disguise is so sufficiently adequate that we will see many people donning it in the future, mostly friends, but sometimes enemies… Nita is the person who will play at being the Spider the most.

As always, though, Page’s strong prose and fast-paced, frantic action pushes through logic weaknesses and provides another great pulp ride. Quite simply, the magnitude of Page’s threats would cause real-life politicians to have nervous breakdowns if just one of them happened. Yet, this is what we want from Page and the Spider, and that is exactly what we get with this story! “The Citadel of Hell” is one of the best Spider novels! But you might need to suspend your critical nature to enjoy it fully.