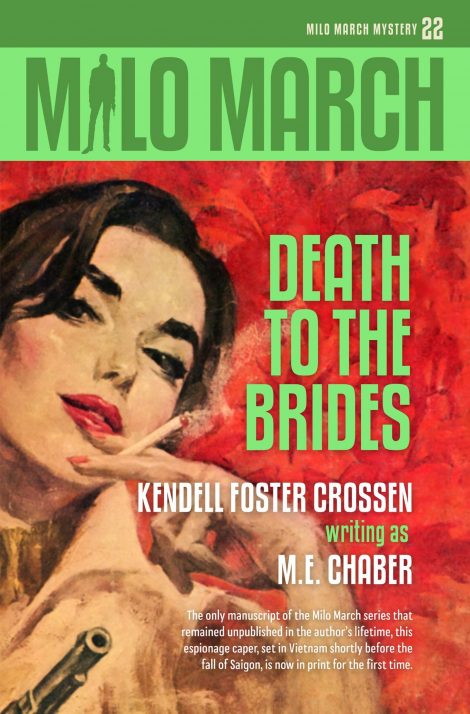 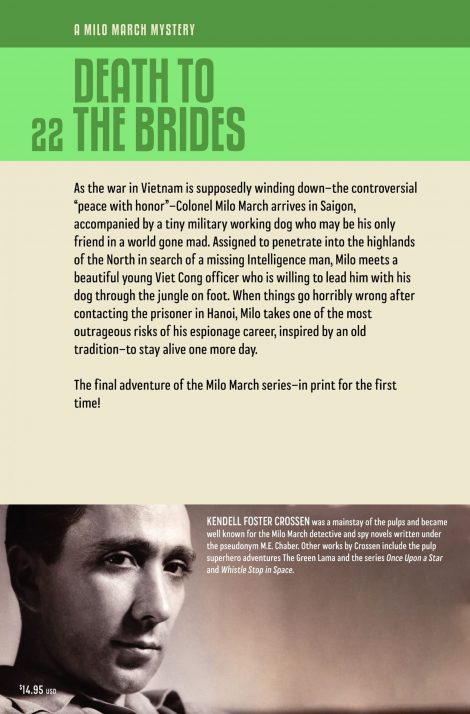 Milo March #22: Death to the Brides 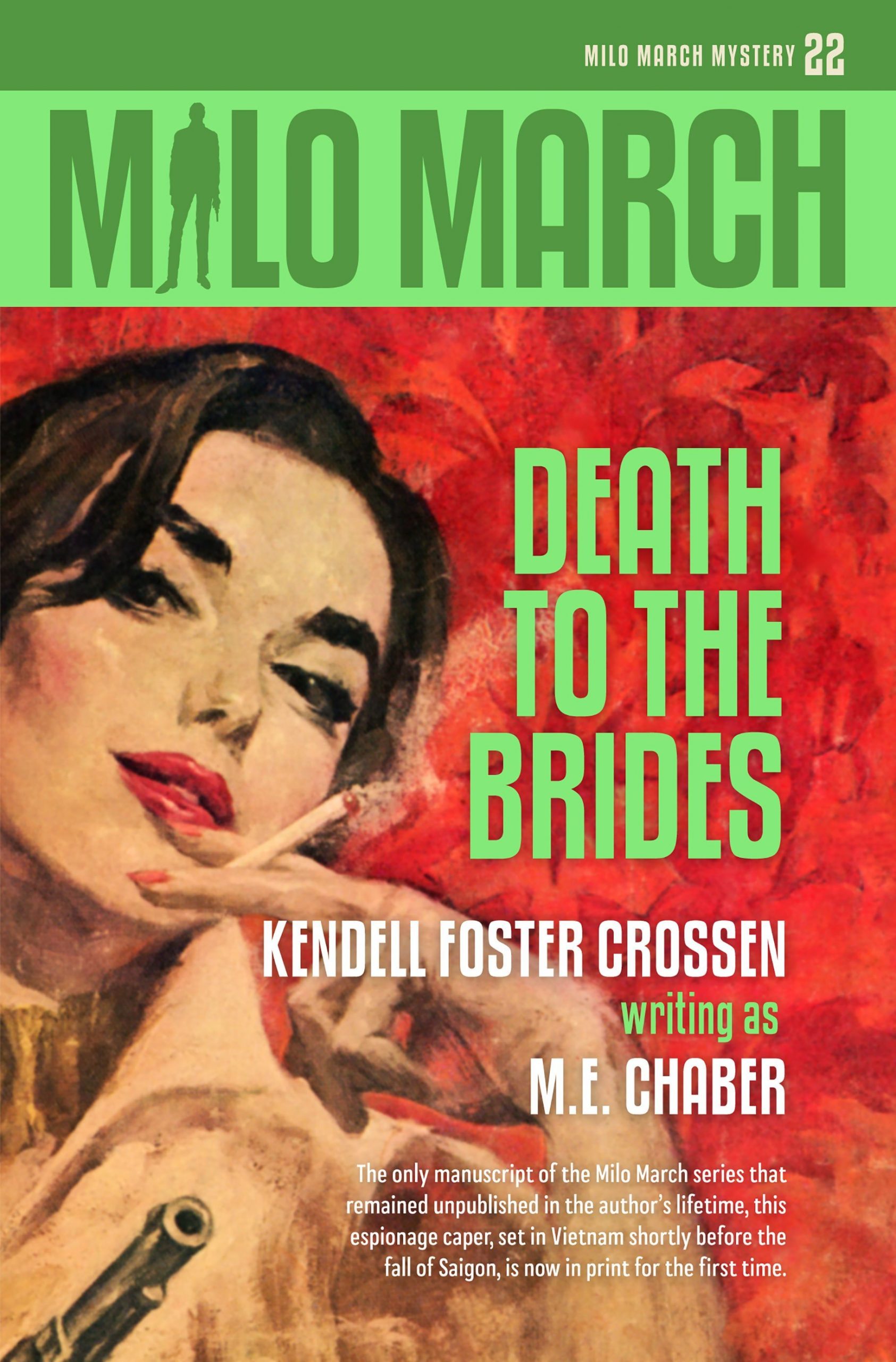 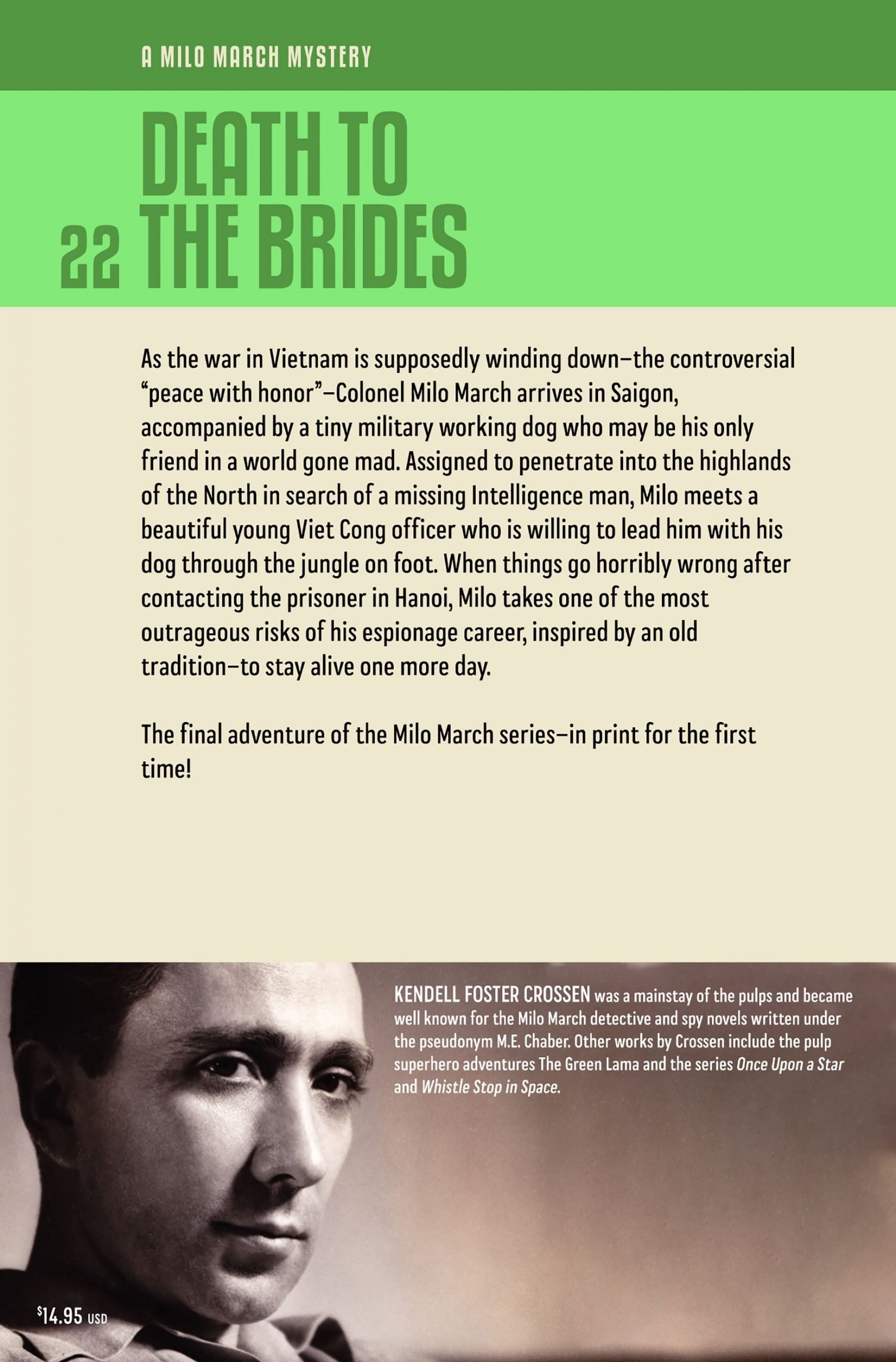 Milo March #22: Death to the Brides

Colonel Milo March penetrates into North Vietnam to rescue an American who disappeared in the highlands while on a mission of peace. Crossing the jungle on foot with the guidance of the possibly treacherous Madame Lê, a beautiful officer of the Viet Cong, and confronting obstacles with the help of a small military dog, Milo prevails in the end through crazy risk-taking inspired by an old tradition—to stay alive for one more day.

Death to the Brides was completed in 1975 but never released during the author’s lifetime, owing to the publisher’s objection to its politically charged content. So this is the only unpublished Milo March manuscript left by Ken Crossen—now in print for the first time.

The book is distinctive in another way. It is the only Crossen book in which characters from two different series interact. Colonel Kim Locke, featured in three other spy novels by Crossen, lends Milo a miniature-breed military dog for an Intelligence mission. Milo has never worked with a canine before, but man and dog quickly take to each other, and the dog will soon prove himself a valuable friend in a world gone mad.

The American war against the Viet Cong is supposedly over now, and the only U.S. personnel in the South are advisors and attachés. Milo arrives under cover as the new military attaché, assigned to rescue an Intelligence man held captive in the highlands of the North. He decides to present himself to the Communists as an American officer who has come to plead for the release of the prisoner on the humanitarian grounds that he is a civilian and a personal friend who was captured while on an errand of peace. But how to reach Hanoi safely?

An informant sends him to Madame Lê, a beautiful young Chinese Vietnamese woman who is a restaurateur and an officer of the Viet Cong. She is willing to guide Milo on an arduous walk through the jungle. Mindful of the possibility that Madame Lê or her comrades may lure him into the hands of the Viet Cong, to be thrown into the same cell with the American he came to rescue, Milo is taken by surprise when the real danger comes from a completely unexpected quarter.

Milo, who never make plans in advance—except the plan to stay alive one more day—embarks on one of the craziest stunts of his espionage career. And the little dog holds the key.