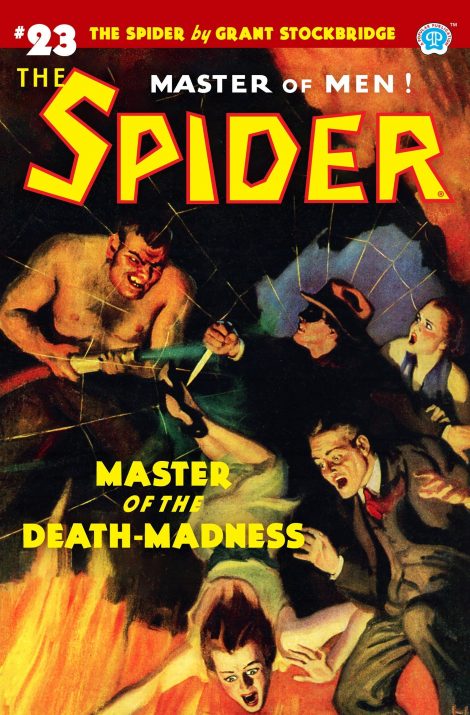 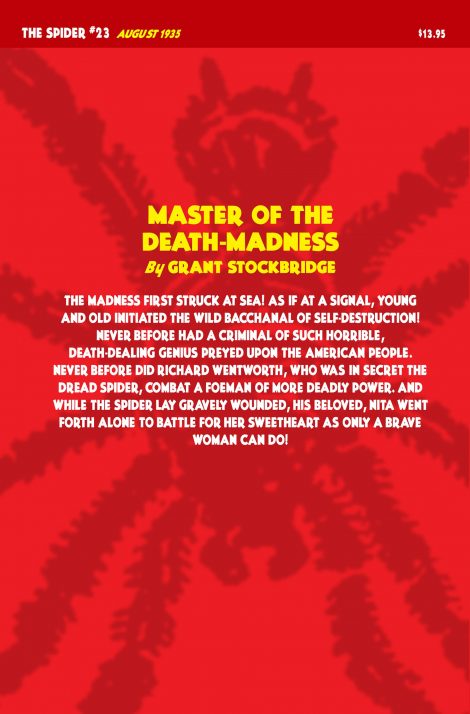 The Spider #23: Master of the Death-Madness 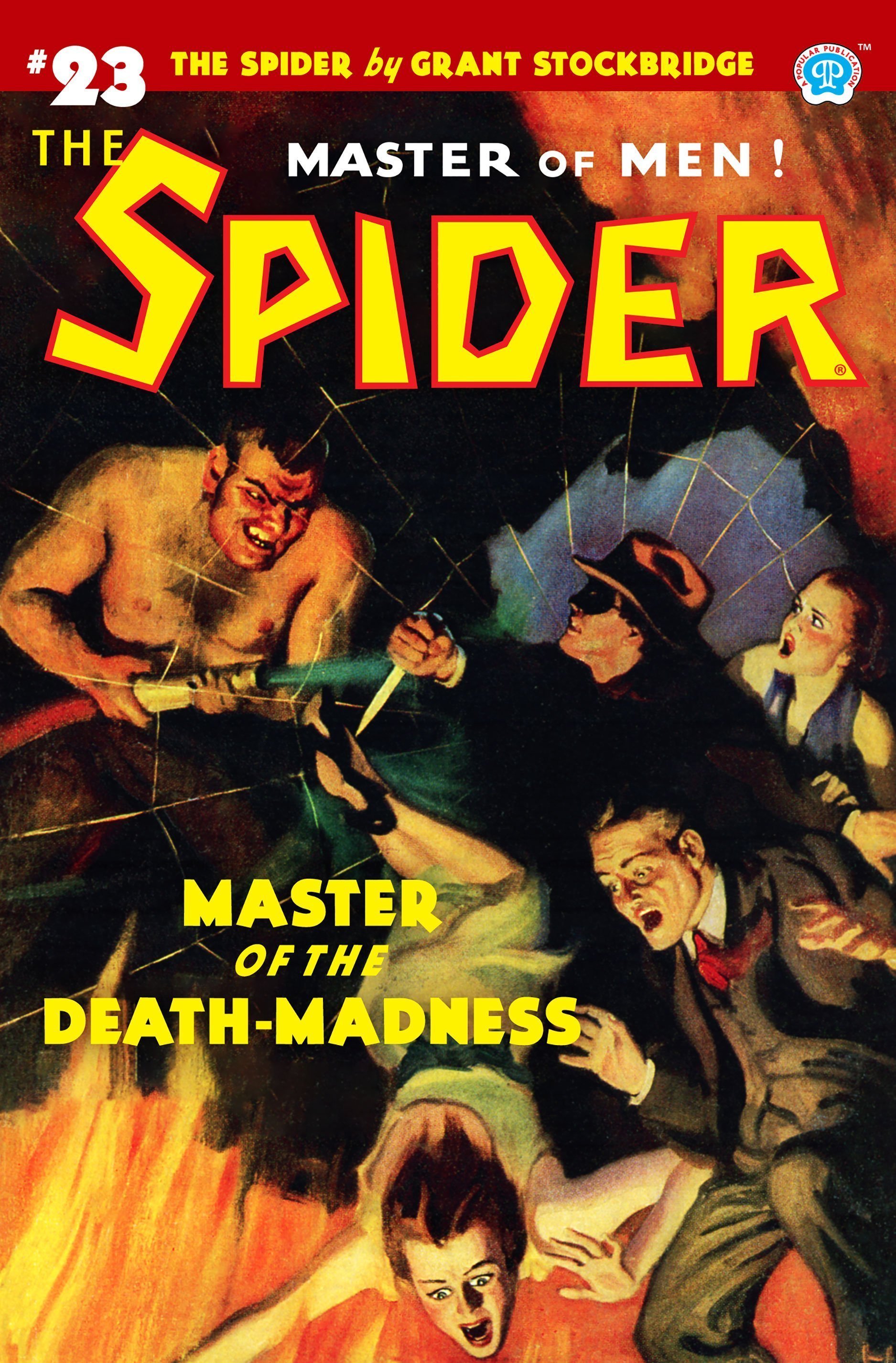 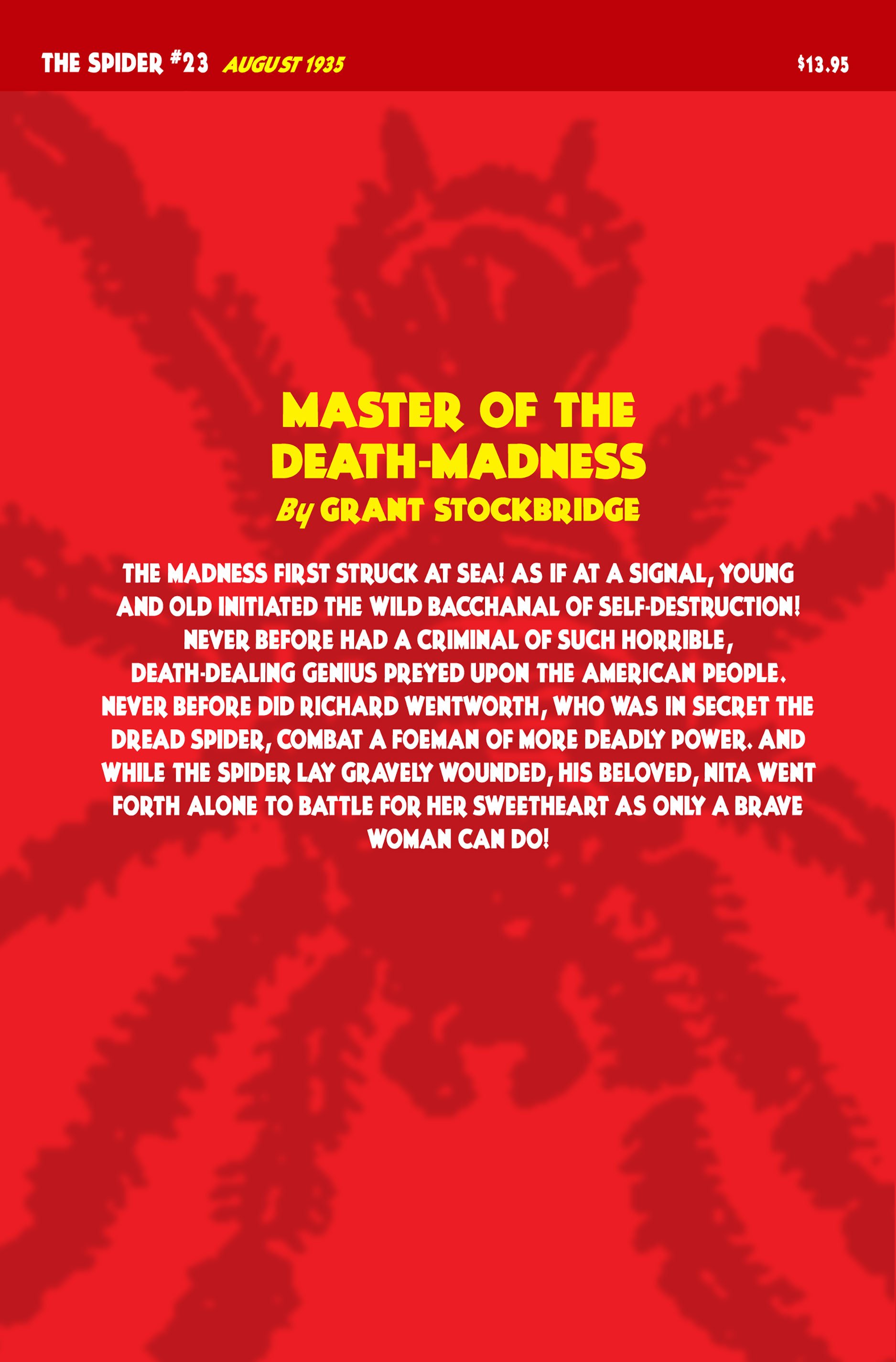 The Spider #23: Master of the Death-Madness

The madness first struck at sea! As if at a signal, young and old initiated the wild bacchanal of self-destruction! Never before had a criminal of such horrible, death-dealing genius preyed upon the American people. Never before did Richard Wentworth, who was in secret the dread Spider, combat a foeman of more deadly power. And while the Spider lay gravely wounded, his beloved, Nita went forth alone to battle for her sweetheart as only a brave woman can do!

The madness first struck at sea! As if at a signal, young and old initiated the wild bacchanal of self-destruction! Never before had a criminal of such horrible, death-dealing genius preyed upon the American people. Never before did Richard Wentworth, who was in secret the dread Spider, combat a foeman of more deadly power. And while the Spider lay gravely wounded, his beloved, Nita went forth alone to battle for her sweetheart as only a brave woman can do!

Be the first to review “The Spider #23: Master of the Death-Madness” Cancel reply

Ok, we have come to it… the Spider story with arguably the greatest death toll… so bad that some states have “whole sections” entirely “abandoned,” perhaps the worse state being Arizona “where the suicide mania had struck with wanton savagery.

“Master of the Death-Madness” is the 23rd Spider story, and a continuation of Norvell Page’s 21st consecutive novels. It was originally published in August 1935. The first paragraph starts with Wentworth feeling a sense of evil, later referred to as a “foreboding” and “uncanny feeling like the sixth sense of bats,” perhaps he speculated from “thought waves.” Was his Spidey sense being activated?

Note: Stan Lee has stated in many places that the name of the Spider was instrumental in creating the name Spider-Man, but that only the name was used. While the villainous Iron Man from “Satan’s Murder Machines” was never cited as contributing to the origin of the Stan Lee’s Iron Man, the correspondence seems strong especially since we know that Stan Lee read The Spider Magazine. Anyway, I started listing ways in which the Spider and Spider-Man are similar. Some are common to many heroes, but some are a bit extraordinary:

Soon he finds himself saving a young lad who apparently had fallen from a ship into the sea. Then two suicides are discovered on the ship, followed by apparently mass derangement when a large number of people start trying to commit suicide, many by jumping off the ship into the water. After that, the suicides spread to NY City with ever increasing numbers on a daily basis until it hit 256 in a day. The press was filled with agonizing stories of people throwing themselves under subways or trucks and all other kinds of self-induced death.

The Spider ferrets out that a drugged gas is the cause of the suicides, but then the Spider is shot and seriously wounded by the police. While the Spider convalesces over many long days with weeks more in front of him, cults worshipping death spring up across the nation, while the number of daily suicides continues to escalate.

As in the “Hordes of the Red Butcher” where she engineers a jail break from Sing Sing for her beloved, Nita must now take command. So, she becomes the Spider even imitating his voice… "the Spider’s mate"… "more deadly than the male."  Her self-imposed deadline is to destroy the Suicide League before a weakened Wentworth recovers enough to venture forth in a deteriorated condition. With the Spider down, his mate does the killing for the both of them! Fortunately she knows enough Arabic to follow the words of the Egyptians in their own language.

As deadly as the Nita happens to be, guess who comes to her aid when she is captured by the enemy? Carried initially from his sickbed! There is a great double-page drawing at the end of the magazine with a gigantic platform carrying a large statue of Anubis, Nita, and the Egyptian beauty, being carried by downcast men, with 50,000 people (according to the text) following them ready to commit suicide, some already falling dead, while buzzards circle above. The Spider arrives at this point in person and takes care of the situation ending the Anubis threat.

At the end, the antidote for the gas is revealed. While not fully explained, the scheme was to use all the deaths to mask the bad guys “to dominate all industry.”

We will see more of the Spider’s mate later in this series!