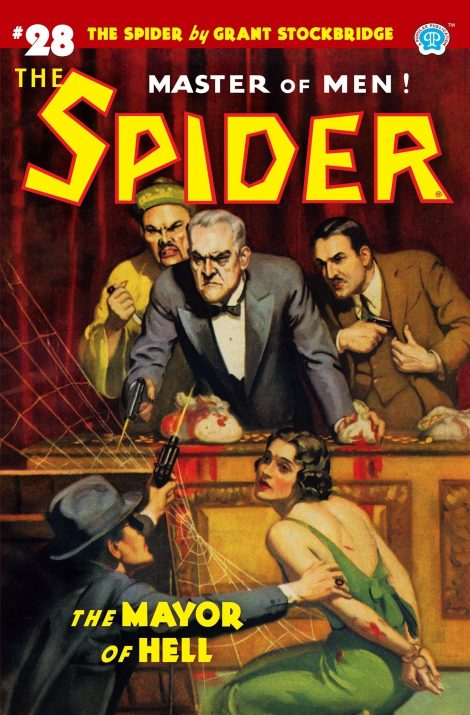 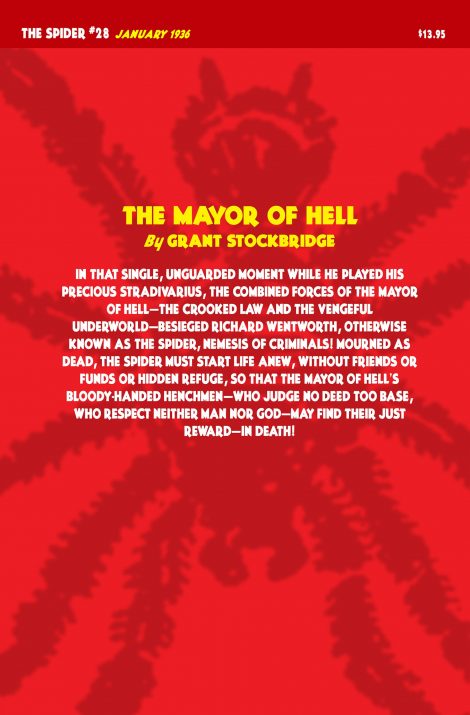 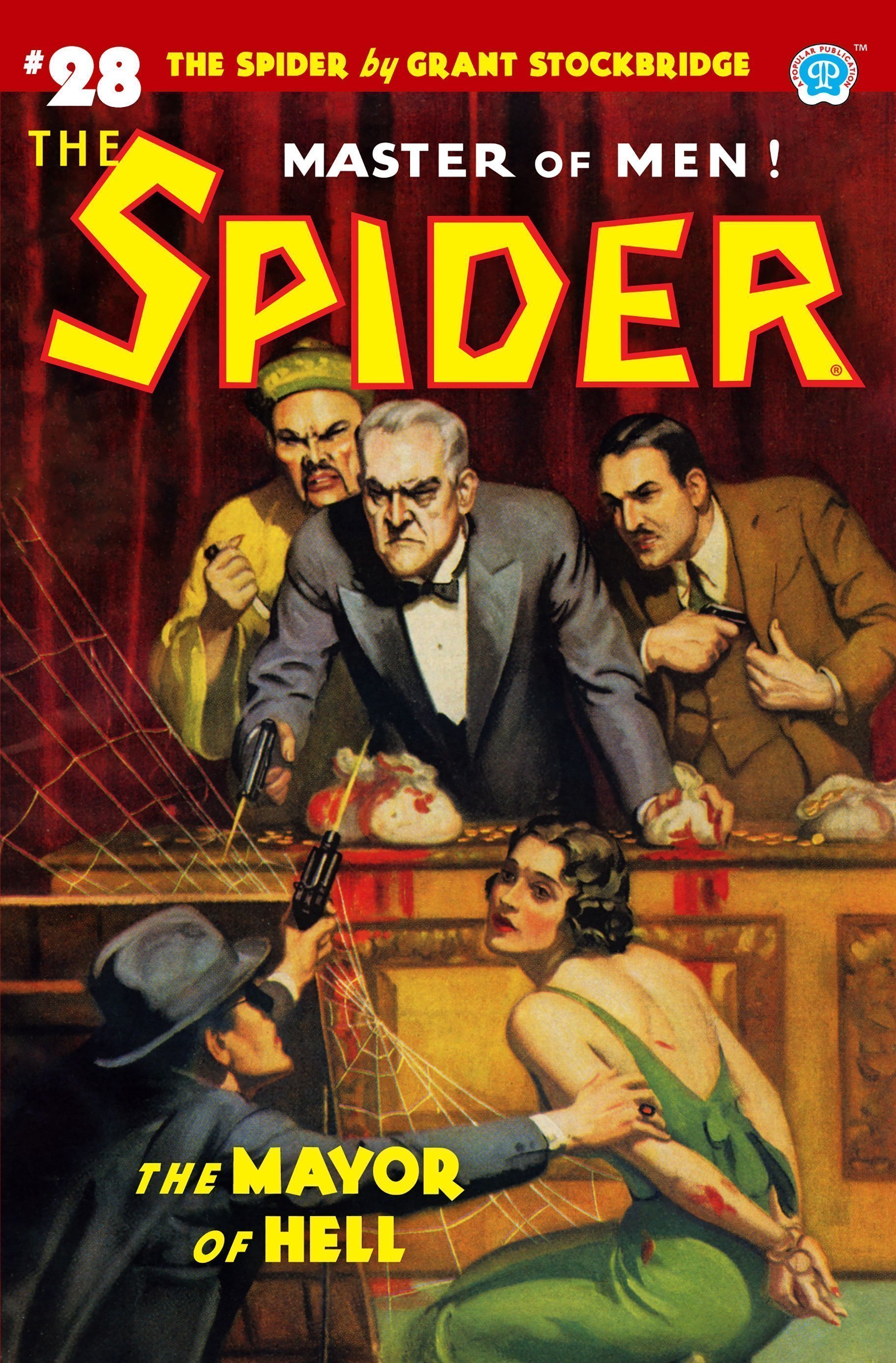 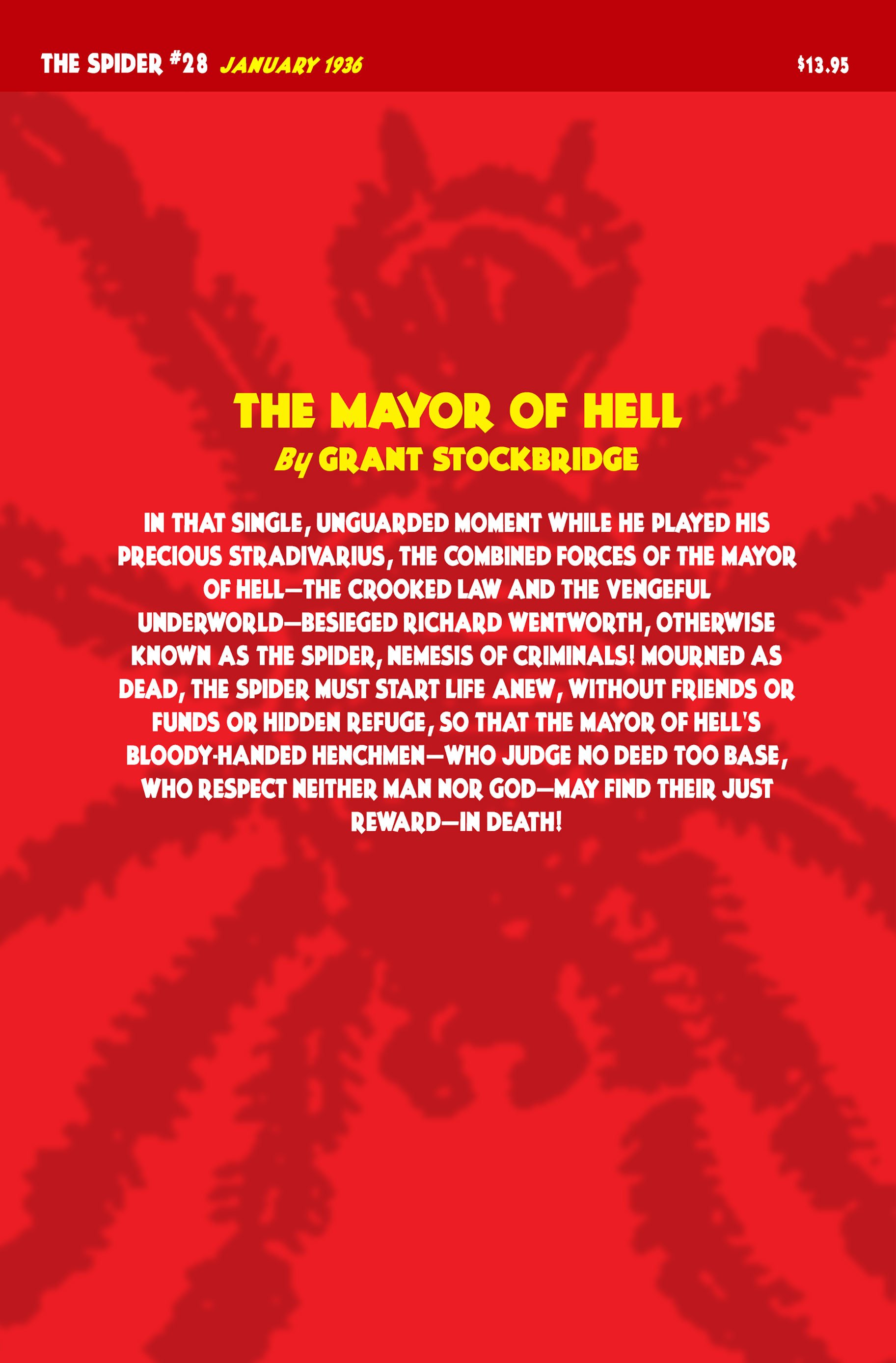 Be the first to review “The Spider #28: The Mayor of Hell” Cancel reply

“The Mayor of Hell” is the 28th Spider novel. We see a low point for the Spider in this one as his entire life appears to be destroyed in this novel. Wounded, he takes six weeks to recover and does so while in seclusion. On his return, he finds that it is thought the Spider and Wentworth are dead; his Spider team is dispersed with Ram Singh and Jackson in prison and with Nita missing. His fortune is confiscated. Kirkpatrick has been impeached as governor. Commissioner Flynn is dead; a new commissioner and governor are minions of newly appointed US Senator Hoey who has recently replaced his murder predecessor and who seems to be running NY State as dictator.

The “Mayor from Hell” is apparently not Hoey or the NY City Mayor, but the head of the criminal elements in the story. The Mayor drives out-right criminal activity, while Hoey handles corrupt government activities. The two efforts work as one.

Can the Spider return from the edge of oblivion? Well, you know the answer as we still have 80 Spider novels to go in the original magazine, but he will not regain everything in this tale.

The dire situation is set up in the first four chapters. Halfway through the fourth chapter, Wentworth wakes up after basically having been unconscious for six weeks. Without waiting for additional recovery, he forms a new team with two men and a woman, where one of them has been a police officer recently fired by the corrupt new police commissioner for arresting a murderer. They do not last long until they are wounded and out of commission.

So, Wentworth forms a new team with Kirkpatrick and some of his followers. The ex-commissioner, ex-governor have taken a page out of the Spider’s playbook and become a vigilante. Wentworth takes on a new persona as Corporal Death. His new mark is to slashes to the face forming an X (or cross) where the two slashes intersect at the bridge of the nose. Wentworth problem is that he is spending a lot of his fighting crooked police and for the first time killing the men in blue.

So, he campaigns to have Kirkpatrick restored as commissioner and wins, allowing his friend to start cleaning up the police force. Up to the task, new Commissioner Kirkpatrick revives the police department in less than a day. With law and order resurrected, Wentworth kills the senator and the mayor, thereby ending this threat.

Another fast tale by Norvell Page, but this one seemed to have greater complexity to its plotting. Robert Sampson thinks that Page might have been working from a story written by another. Perhaps, but this also has all the fast-moving action.  Because of the better plotting, this one is also better than most Spider novels.

In this novel, the Spider lost everything. By its end, he has recovered some of what he has lost. Kirkpatrick is back as commissioner, and he has recovered Nita although she is wounded. He has still not regained his earlier status or the rest of his original team. Thus, we move to the next novel in the series “Slaves of the Murder Syndicate.” This next novel is not exactly a sequel, but does build on what has been lost in this story.