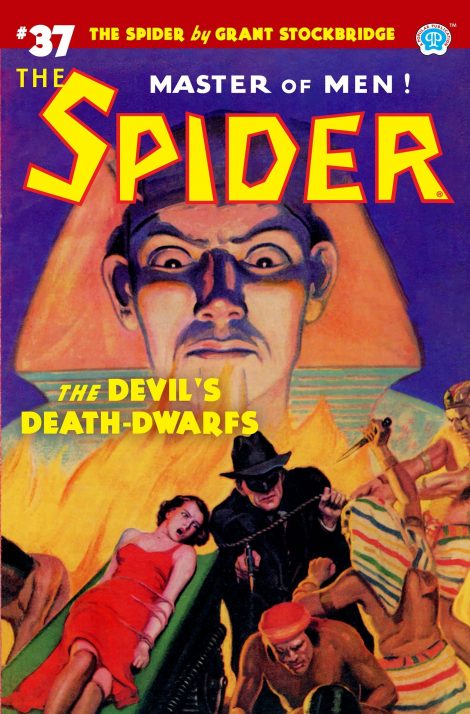 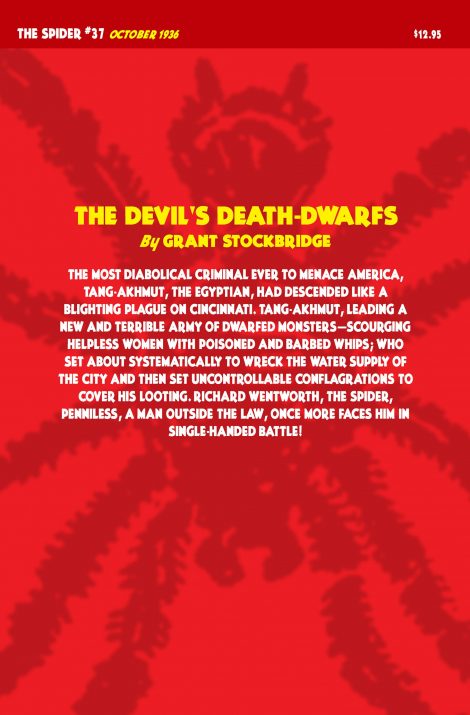 The Spider #37: The Devil’s Death-Dwarfs 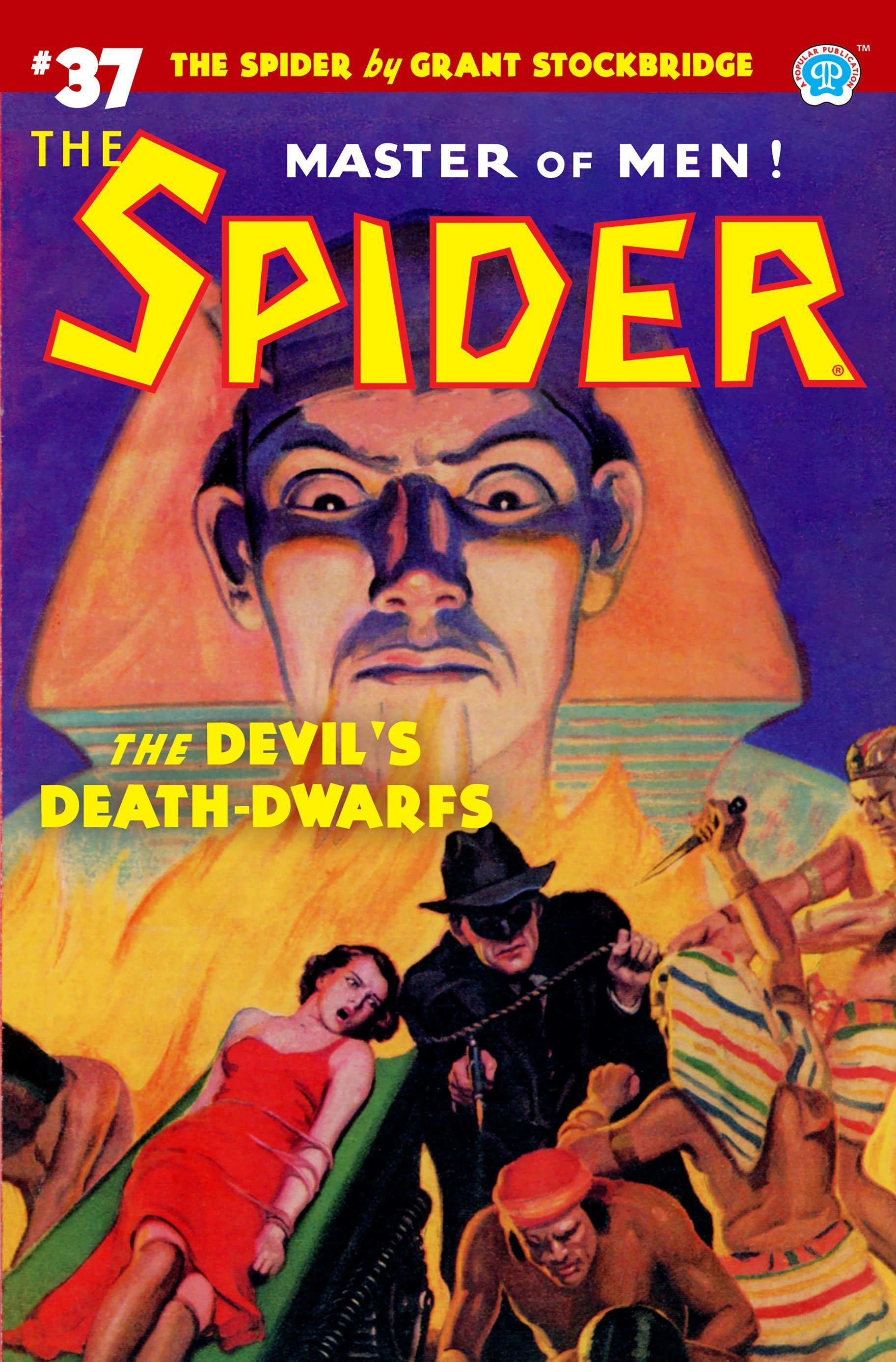 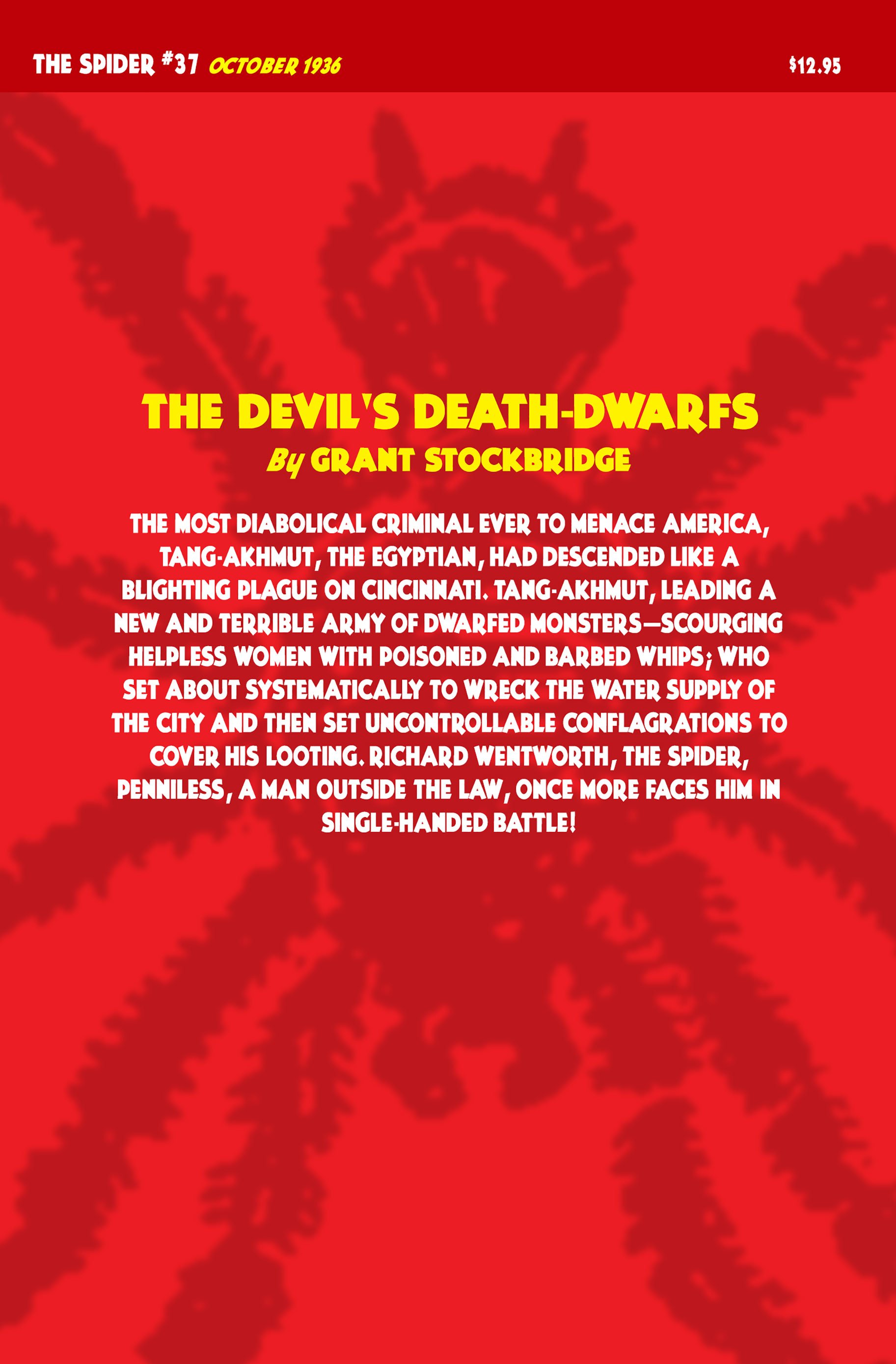 The Spider #37: The Devil’s Death-Dwarfs

The most diabolical criminal ever to menace America, Tang-akhmut, the Egyptian, had descended like a blighting plague on Cincinnati. Tang-akhmut, leading a new and terrible army of dwarfed monsters—scourging helpless women with poisoned and barbed whips; who set about systematically to wreck the water supply of the city and then set uncontrollable conflagrations to cover his looting. Richard Wentworth, the Spider, penniless, a man outside the law, once more faces him in single-handed battle!

The most diabolical criminal ever to menace America, Tang-akhmut, the Egyptian, had descended like a blighting plague on Cincinnati. Tang-akhmut, leading a new and terrible army of dwarfed monsters—scourging helpless women with poisoned and barbed whips; who set about systematically to wreck the water supply of the city and then set uncontrollable conflagrations to cover his looting. Richard Wentworth, the Spider, penniless, a man outside the law, once more faces him in single-handed battle!

Be the first to review “The Spider #37: The Devil’s Death-Dwarfs” Cancel reply

“The Devil’s Death Dwarfs” is the alliterated title for the 37th Spider novel which was originally published in October 1936. Robert Sampson says this story might be “the busiest novel in the English language” and for good reason!

Tang-akhmut, the Pharaoh, is back for his second adventure of four the Spider, the first being in “The Coming of the Terror.” He is now terrorizing Cincinnati; apparently, he did not die at the end of the last novel, but was captured and consigned to Sing Sing from which he promptly escaped. This is the third time that we have seen escapes from that prison:  Nita engineers Wentworth’s escape in “Hordes of the Red Butcher,” and Wentworth helped Ram Singh and Jackson to do the same in “Mayor of Hell.” It sounds like Sing Sing needed to improve its security.

Meanwhile Wentworth is not doing well. He lost all his wealth in the last novel and has only about $100 on his person, a nice sum in 1936 but not much for one who had been a multimillionaire. In addition, police across the nation on alert to arrest him as the Spider. He is also operating without his usual cast of helpers.

The Pharaoh is looting the city, kidnapping for ransom, and threatening wholesale destruction. He uses his hypnotic powers, explosives and fire, and an army of dwarfs. Fortunately, Page’s “dwarfs” do not appear to be Little People; also, their origin is not explained.

There are lots of action as we jump from one situation to the next as hundreds and thousands perish in the battle. In the climatic scenes, the Spider leads an evacuation of the city leaving it to be destroyed. The Spider believes that he kills the Pharaoh at the end of the story, but we know that he will return in the magazine’s next edition.

In addition to his other comment above, Robert Sampson really does not like this one writing that there is nothing series in it. I thought there are some redeeming qualities and that it is better than the worse of Page’s Spider novels. Certainly the Spider lives in his own special world; therefore, we are not looking for perfect reality in his adventures. I would agree that this novel has the feel of being one that is incomplete, as in a first draft awaiting a second one to iron out details, or perhaps one in which Page did not put a lot of effort, knowing that he was leaving the Spider behind for a bit (or perhaps he thought forever).

And with this, Norvell Page abandons the Spider for the next eight months. I suspect that Wentworth and Nita were the happiest of all given the difficulties this writer posed for them… for instance, in nearly every issue Wentworth is wounded, and in nearly every issue Nita is kidnapped. While the usual speculation is that Page left because of contract issues, there is a part of me that wonders if perhaps he had a breakdown of some kind; it certainly seemed to me that Wentworth was getting close to needing rest in an asylum. So, bring on Emile C. Tepperman. 1936 was not a great year for Page’s Spider.