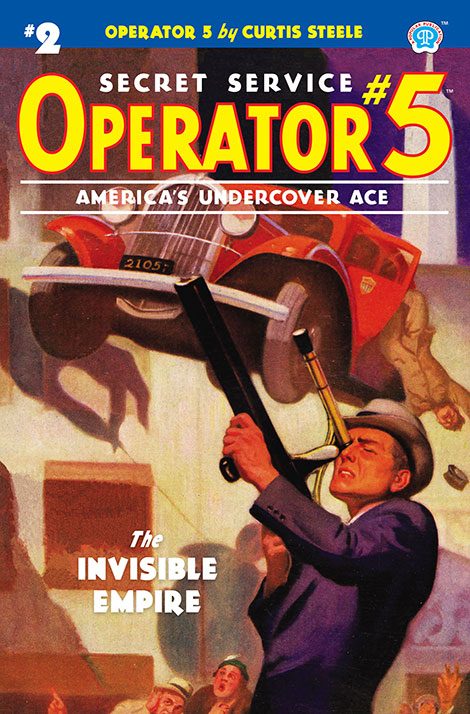 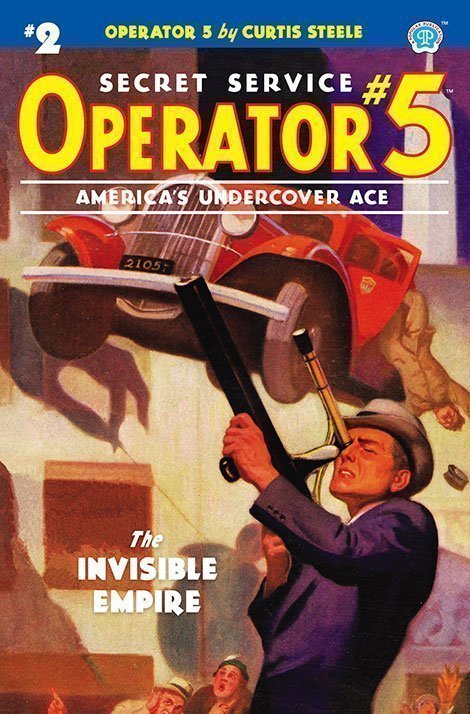 Be the first to review “Operator 5 #2: The Invisible Empire” Cancel reply

“The Invisible Empire” is the second Operator 5 novel and was originally published in May 1934.

This time, the enemy is the Yellow Empire. While the exact nation is not identified, if the real-world situation in 1934 is any indication, it could have only be Japan. Since it was beating up on China at that time, China, the only other remote possibility, is eliminated. The only Yellow Empire names that were mentioned in the text also has the form of Japanese names, although not common Japanese names.

The question for all these invasions involves the possibility of whether there was any chance for success given the two-ocean isolation of the US, its immense population, and its military prowess once mobilized. The conclusion in the first book, “The Masked Invasion,” is that there was no chance of success for those invaders.

This one begin with a shower of leaflets intended to intimidate the public into surrendering or perhaps to generally undermine the nation’s morale. The Yellow Empire has a super weapon in a large, artificially cloud-hidden aircraft, basically a flying station above the US with permanent air-born resident capability; it can sweep away other planes with a wind so great as to push pilots 200 hundred miles off course, its own smaller planes can land and take off on it, and it has the capability to drop poisonous gas on any US city. The Yellow Empire also has robot radios that can fly planes. It has a network of spies that have already infiltrated the US and can pull off strategies such as kidnapping the President’s son to get compliance. The empire also apparently has large well-armed military that presumably could follow up with conventional war if all the rest of its high-technology initiatives work. So there is some chance, although in this writer’s opinion very slight, that the invasion might work… or perhaps the Yellow Empire could force some concession from the US.

Nevertheless, with only one air station, it is highly improbable that any rational leader, however aggressive that leader might be, would attempt an invasion. Everything depends on this one super-aircraft to succeed…and in the real world, things happen. With 12, one might take the risk; the ramifications of attacking with one that might crash from a surprise lightning bolt or a pilot driving it accidentally to ground… or to Operator 5 pulling a rabbit from a hat… are simple too horrendous to take the risk.

With a relatively weak affirmative answer to the first question, we come to the second question, which concerns the capability of Jimmy Christopher, Operator 5, to be able to thwart a threat sufficiently large and complex such that it might succeed. In this novel, according to Kwo Taska, Chief of the Espionage Office of the Yellow Empire, Operator 5 is the “greatest single threat” against the plans of the Yellow Empire. Indeed, given that a lot of the Yellow Empire’s plans are based on subterfuge, I would concur that Operator 5 could potentially damage significantly the enemy’s plans, as in fact according to the story, he does. Indeed, the countermeasures used to defeat the flying air station were reasonable and logical. They became somewhat complicated when the President’s son is jailed on it though.

As such, this story is logically presented, although obviously improbable even in the universe of Operator 5. I found it to be good and enjoyable story, making look forward to the next issue!