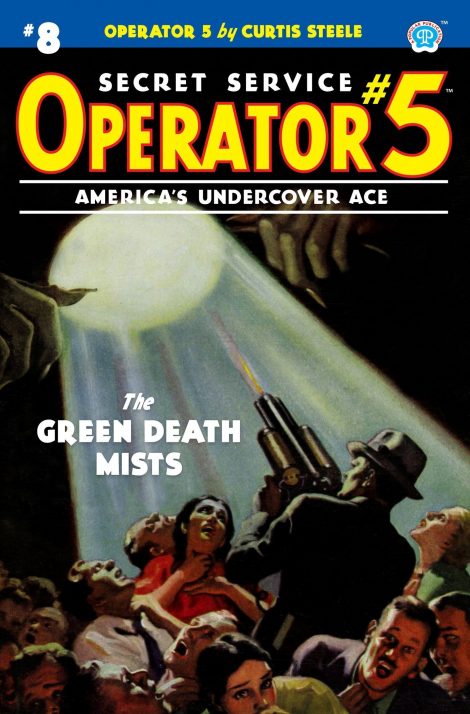 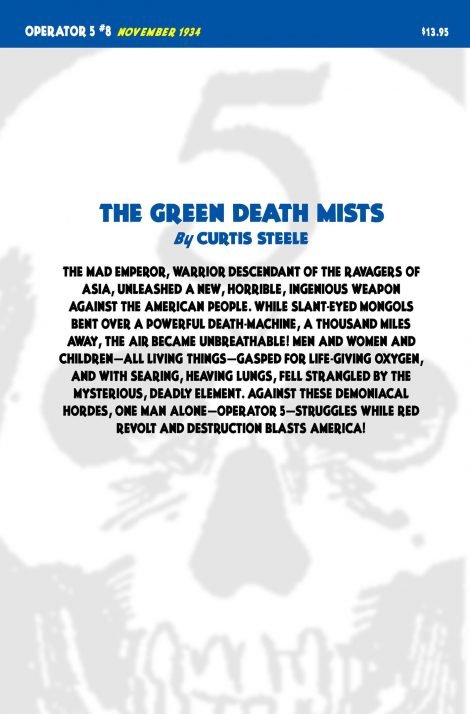 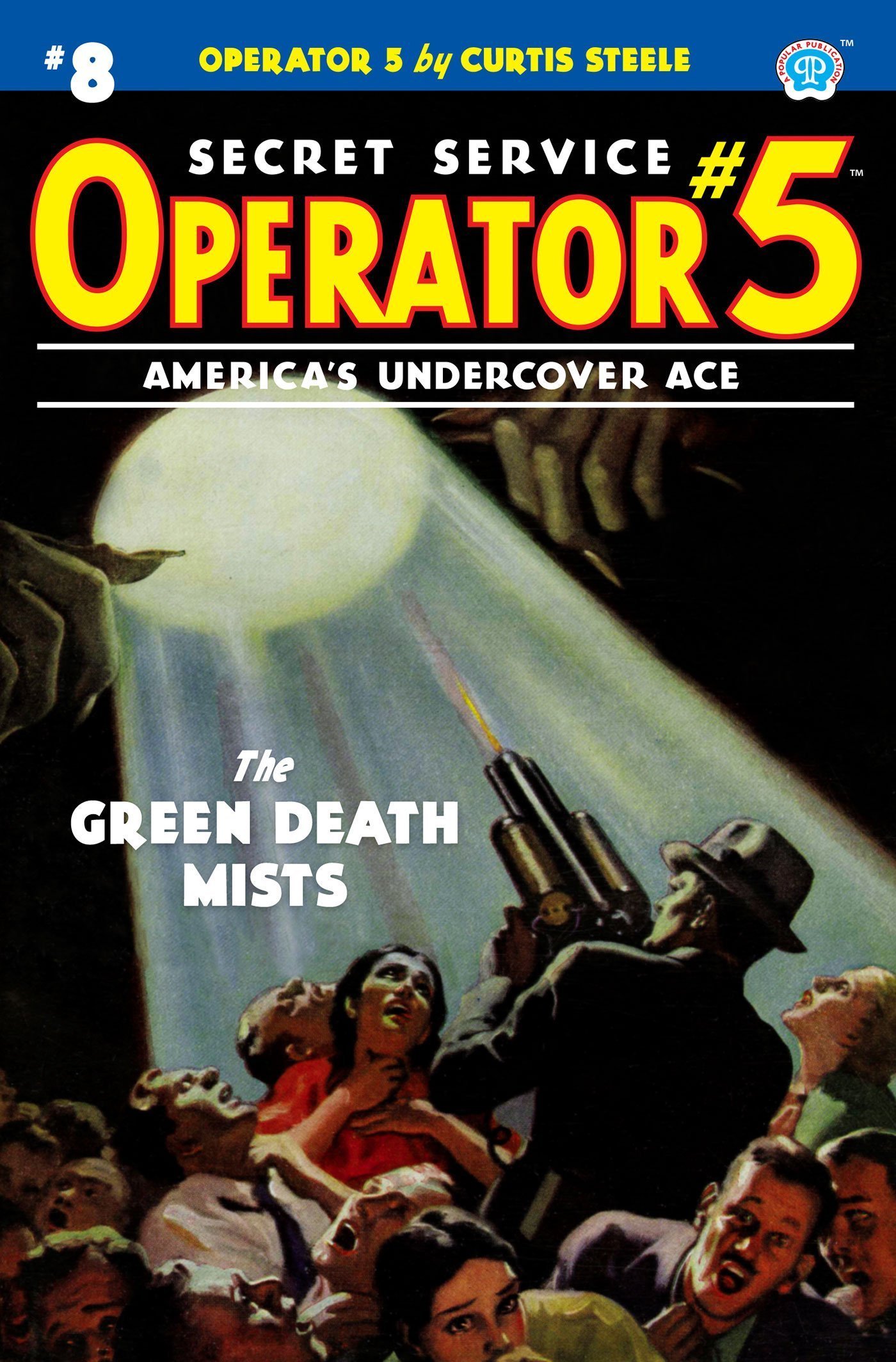 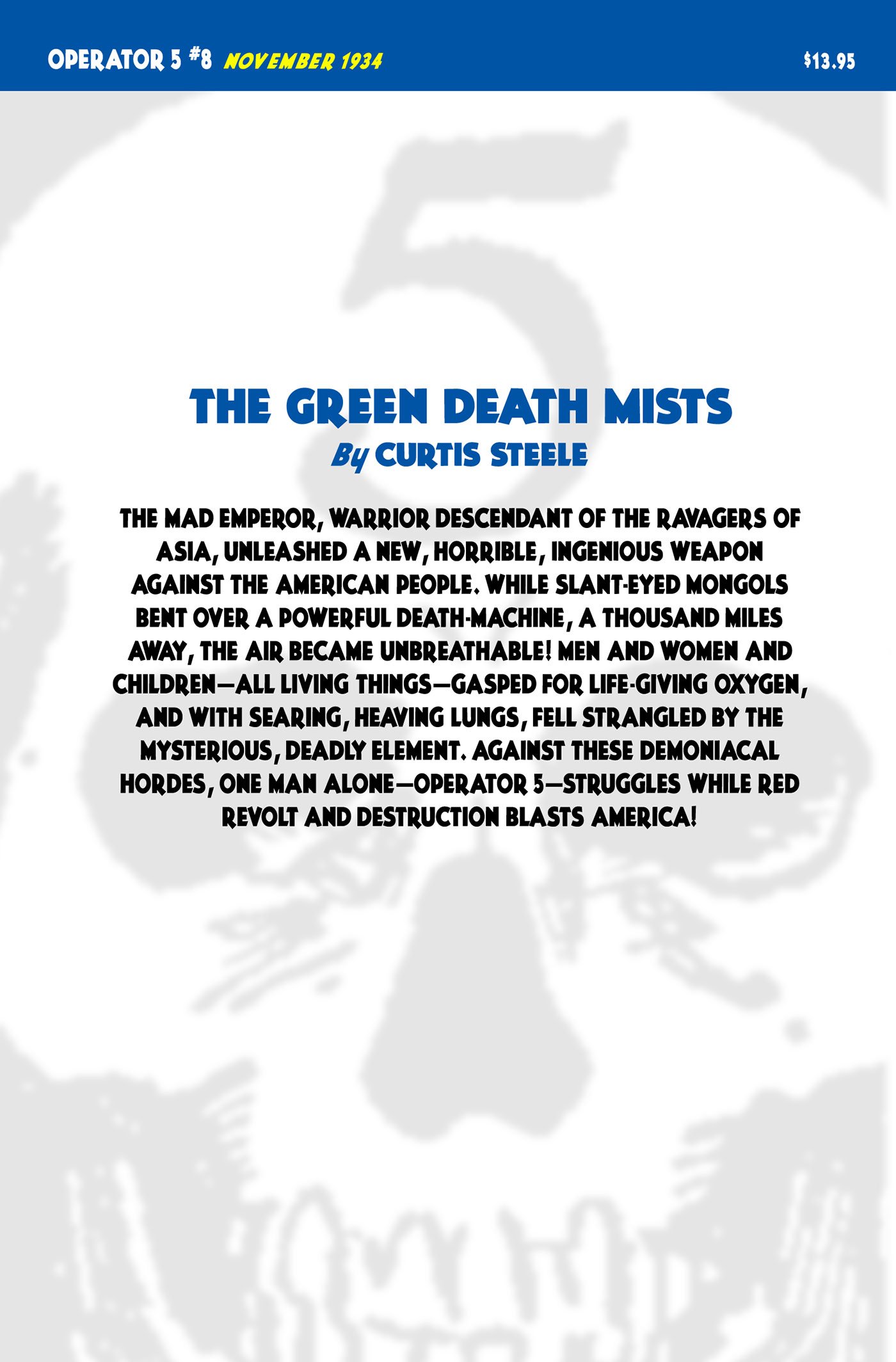 The mad Emperor, warrior descendant of the ravagers of Asia, unleashed a new, horrible, ingenious weapon against the American people. While slant-eyed Mongols bent over a powerful death-machine, a thousand miles away, the air became unbreathable! Men and women and children—all living things—gasped for life-giving oxygen, and with searing, heaving lungs, fell strangled by the mysterious, deadly element. Against these demoniacal hordes, one man alone—Operator 5—struggles while red revolt and destruction blasts America!

The mad Emperor, warrior descendant of the ravagers of Asia, unleashed a new, horrible, ingenious weapon against the American people. While slant-eyed Mongols bent over a powerful death-machine, a thousand miles away, the air became unbreathable! Men and women and children—all living things—gasped for life-giving oxygen, and with searing, heaving lungs, fell strangled by the mysterious, deadly element. Against these demoniacal hordes, one man alone—Operator 5—struggles while red revolt and destruction blasts America!

Be the first to review “Operator 5 #8: The Green Death Mists” Cancel reply

“The Green Death Mists” is the eighth Operator 5 novel and was originally published in November 1934.

This tale is a marvelous one, although some of the details on the mechanics do not make much sense. Jengis Dhak has somehow acquired the ability to control Asiatic masses, including descendants in the New World, including most Mexicans, American Indians, and Eskimos. Although racially different, Indians of the subcontinent are also affected. Jengis has amalgamated various religions into one cult that he controls. How he could manage to establish such widespread control is not described.

Jengis also has a device which can turned regular oxygen (O2) into ozone (O3), although its author Frederick Davis does not appear to know the chemical formula for ozone. Jengis has a generator that electrically rearranges oxygen molecules, although somehow it does not seem to affect oxygen in tanks or when it is supplied from tanks to men.

Rebellions are occurring in India, Japan, eastern Soviet Union, and northern Mexico. Most of the Soviet military is apparently in the Far East, and falls prey to Jengis. Likewise Japanese soldiers are joining with the Soviet rebels to attack Alaska to gain living room for Asiatic peoples, ignoring that larger Siberia has already been captured. Meanwhile hundreds of thousands of Mexicans are massing on the southern border while domestic Japanese, American Indians, and other Asiatic peoples are running havoc within the borders.

When air relief is sent to Alaska, Jengis uses his weapon to take the oxygen (O2) from the plane’s combustion engines and from pilot’s lungs. Later, he would even use it against Congress in session for only a minute, depriving lawmakers of breathable air for that time, as a warning shot.

Of course, Operator 5 is leading the charge against the country’s enemies. He coordinates the defense of Alaska, while finding the secret lair of Jengis in the lower 48… actually the only 48 at the time this novel was written.

Could Operator 5 have stopped it? In the novel, he did so by killing Jengis and his underling, the new ruler of the Soviet Union, and by destroying the secret weapon and plans. Unfortunately for an enterprise as large as the Asiatic attempt as described which would have required a large organization, there is no way that a successor would not have stepped forward to replace Jengis when he was killed. Also given the number and deployment of devices in the story, there is also no way that Operator 5 could have eliminated them from existence. As such, I do not think that Operator 5 could have been successful the way that is told in this story.

The engineer in me finds much of the proceedings as being more than fanciful in this story… perhaps that is why it has such a slight reprinting history. However, I must also admit that I enjoyed it immensely and have no qualms on recommending it with the caveats given above.

Operator 5 #5: Cavern of the Damned