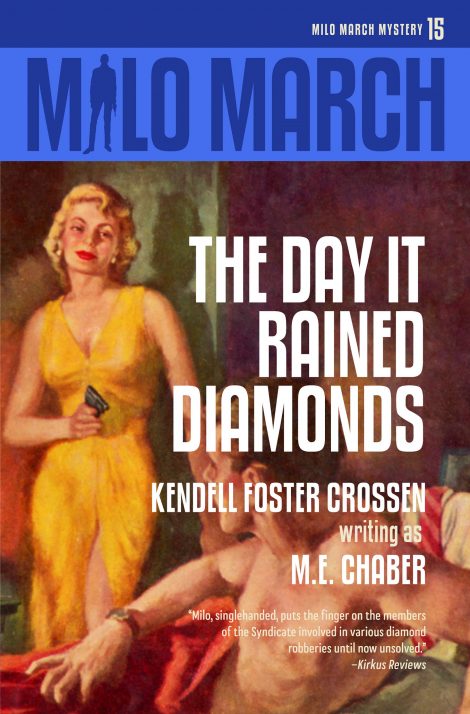 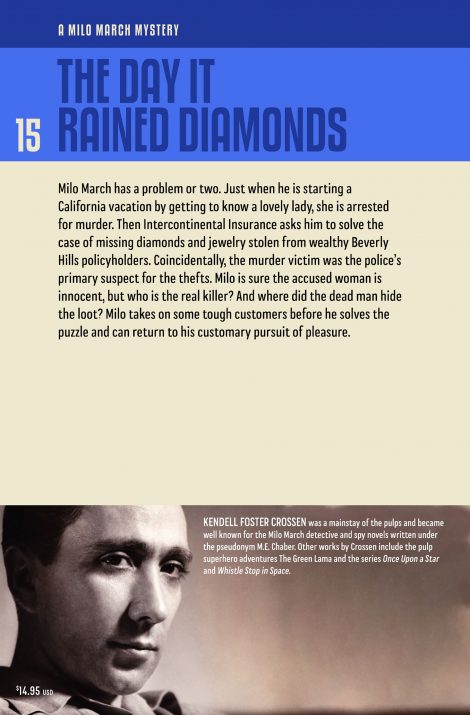 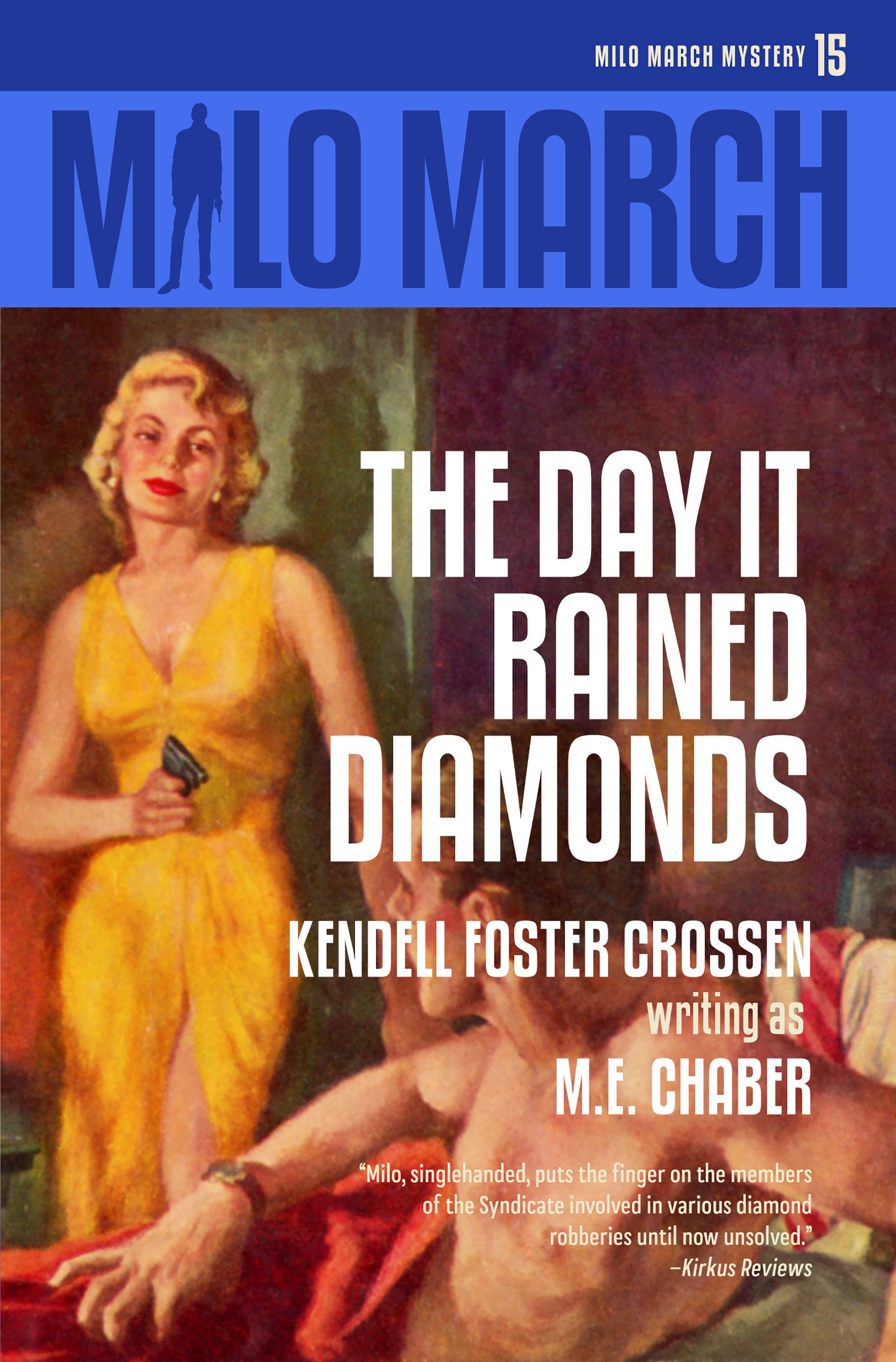 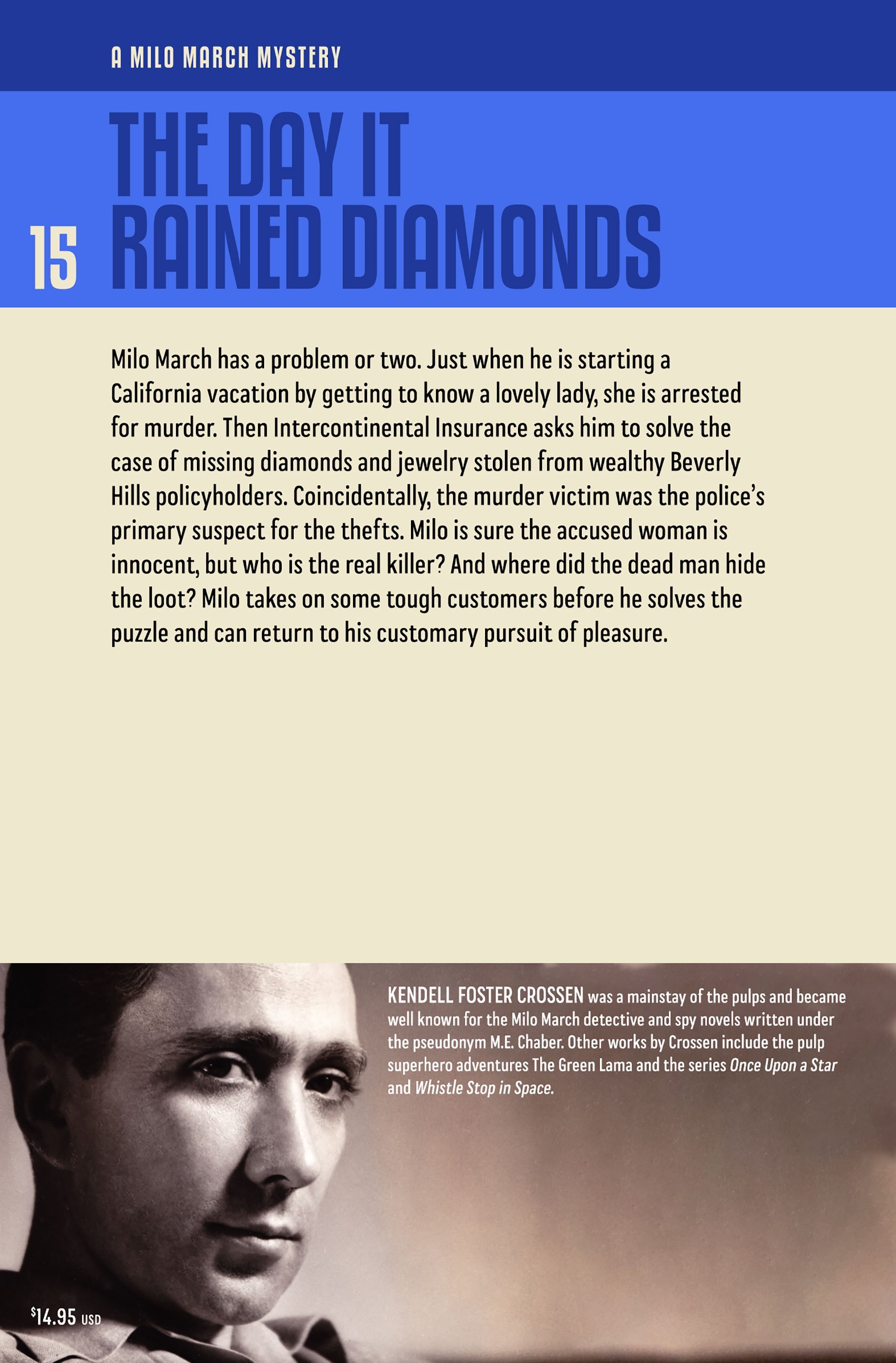 A complicated case of stolen diamonds and murder comes just as insurance investigator Milo March is starting his Southern California vacation. He was loaned a friend’s Beverly Hills apartment, complete with access to a little black book. His first date is Lita Harper, an attractive interior decorator who comes to his apartment to drink and talk, but then suddenly has to leave early. Not long after Milo resigns himself to an early bedtime, a scream is heard. Rushing out to investigate, he is stunned to find Lita in a neighboring apartment, holding a gun, with a dead man at her feet. The police arrest her for the murder of a bad boy named Johnny Renaldi. Coincidentally, Johnny was the police’s chief suspect in the jewel robberies.

Lita had been the interior decorator for most of the burglarized homes. Was she suckered into supplying information to Johnny about the location of wall safes? Milo couldn’t believe she was capable of planning a jewel theft operation, and murder was out of the question. Yet the playboy Renaldi didn’t fit the role of a mastermind either.

The insurance company wants Milo to recover the loot and also to solve the murder case. So much for his vacation, but Milo rises to the occasion and takes on some tough Syndicate customers before he solves the puzzle of where the dead man hid the loot.

Milo March is on a new case for Intercontinental Insurance, and it’s a real puzzler this time. Actually, Milo was just settling into a hedonistic vacation in Los Angeles when Intercontinental called him from New York and convinced him, with the promise of a large bonus, to try to solve a series of jewel robberies in Beverly Hills. Since Intercontinental carries the bulk of the policies on the jewels, they are desperate for Milo to get the loot back—and to see the thieves put away, as a cautionary lesson to other would-be lawbreakers.

The police have identified their prime suspect: Johnny Rinaldi, a gangster with a cross-country criminal record. But just as Milo takes on the case, the cops are busy arresting Johnny’s beautiful girlfriend, Lita, for the murder—she’s been found standing over his body with a revolver in her hand. Yet Milo won’t believe Lita did it. He had just been on a date with her the same night!

He also doesn’t believe Renaldi is the chief culprit. The thefts must have been committed by a gang of seven or eight people, and Johnny didn’t seem smart enough to be the mastermind. In each case a home was broken into at the exact time the owners had taken their gems out of a bank vault. Somebody was tipping off the thieves. Milo has a good idea of who is involved—for example, the hoods who keep warning him to stay off the case, constantly tailing him, and threatening him with fists and guns. But one problem is how to pin it on them, and the other is: where the hell is the large amount of stolen jewelry, especially the three hundred loose diamonds hidden in a place only known to the dead man?

The question is a little like the old gag about looking for a lost dog: “Where would you go if you were a dog?” Milo tries to guess where Renaldi might have hidden the jewelry. There had to be a lot of it, so he couldn’t just dump it in a dresser drawer. And why hadn’t any of it turned up on the market? Surely he wasn’t saving the diamonds to trickle through his fingers, or to run barefoot through a collection of costly baubles. The answer is just on the tip of Milo’s mind, and he’s got to access his intuition or else several millions swill have to be paid out—and Lita could go to the gas chamber.

“Milo, singlehanded, puts the finger on the members of the Syndicate involved in various diamond robberies until now unsolved.” ―Kirkus Reviews

“Big-time crooks’ toes are stepped on; much throat-wetting. Flip and fast.” —Riverside Press-Enterprise

Be the first to review “Milo March #15: The Day That Rained Diamonds” Cancel reply