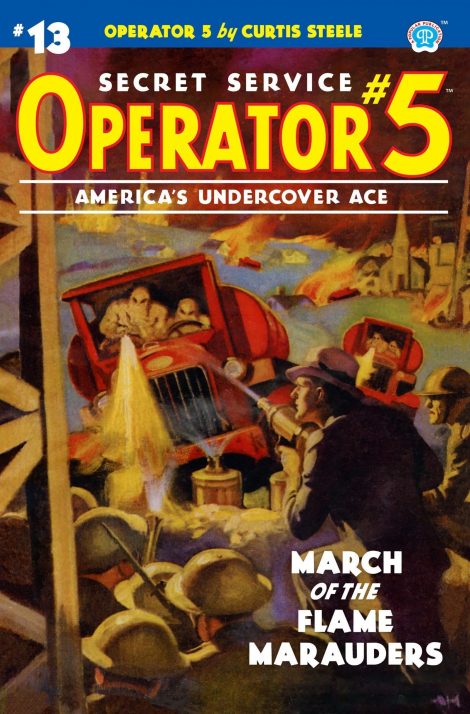 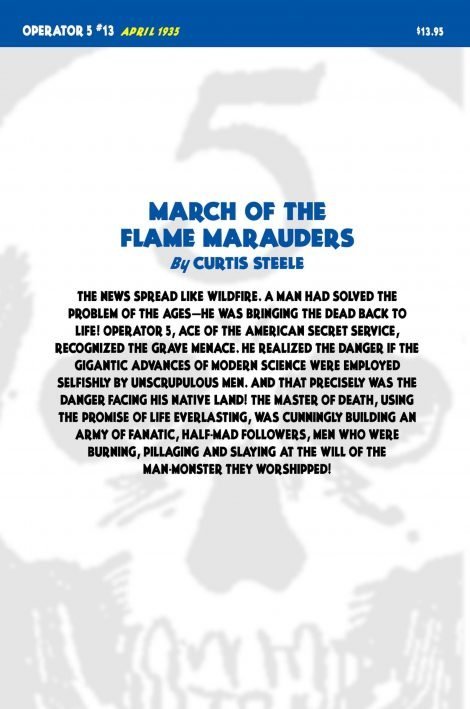 Operator 5 #13: March of the Flame Marauders 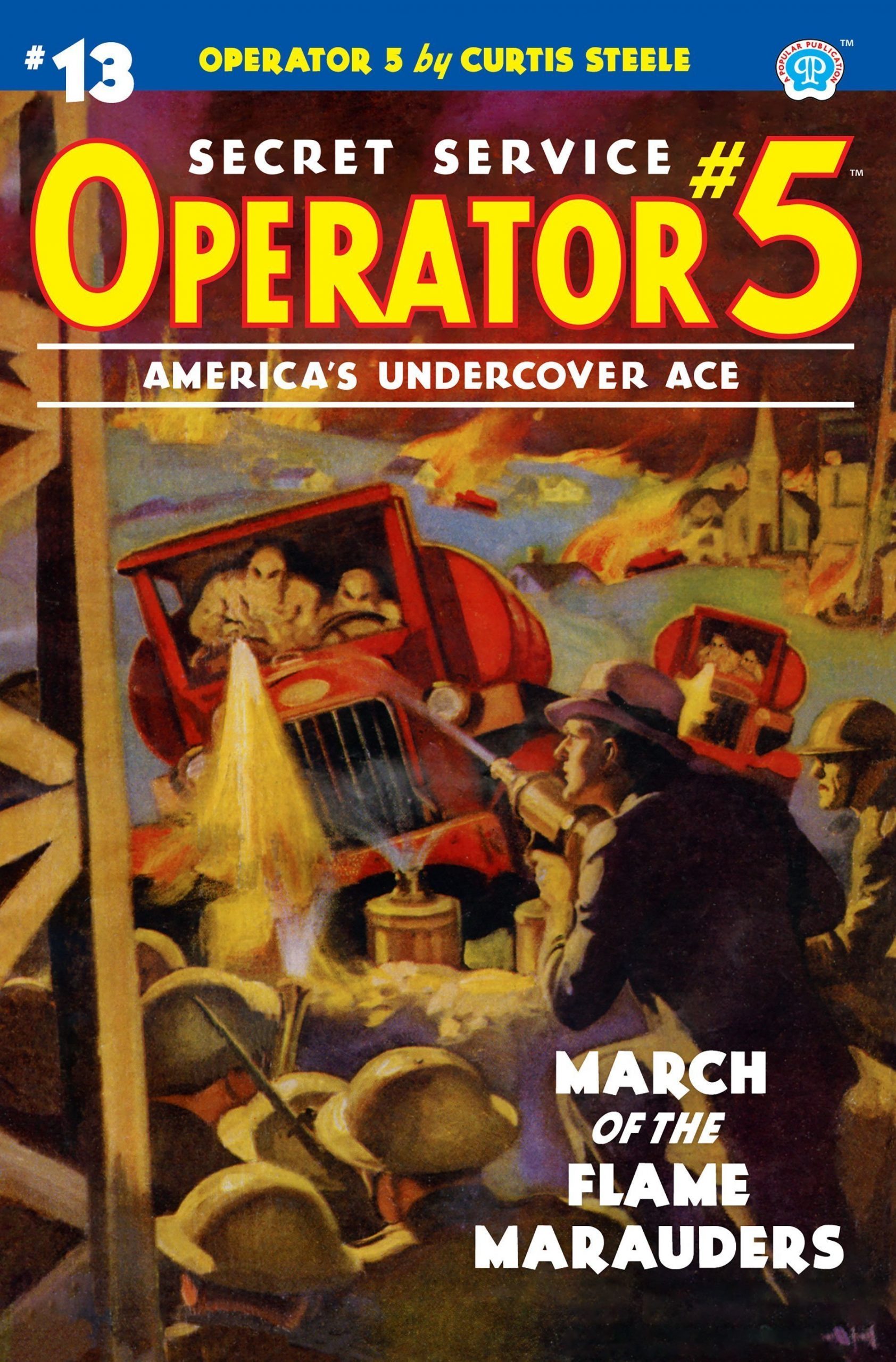 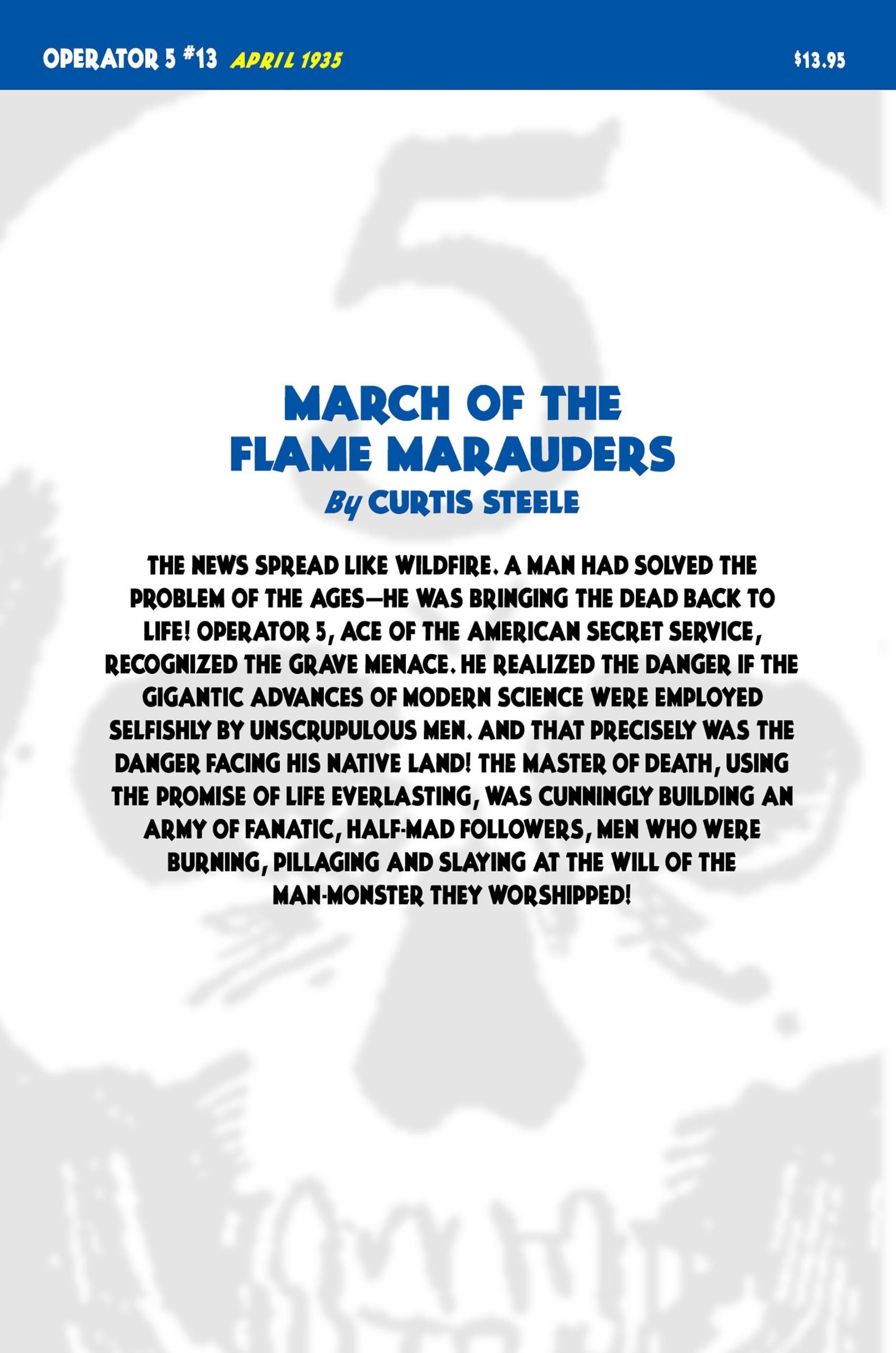 Operator 5 #13: March of the Flame Marauders

Oil—black gold—the blood of Mother Earth! America had squandered its precious reserves and a syndicate of skilled saboteurs was destroying the remaining store! With all National defense rendered helpless for want of it, bitter despair gripped the hearts of the country’s millions. Pillage, slaughter, and slavery—misery and death—threatened each American! And Jimmy Christopher, Operator 5 of the United States Intelligence, was gambling his life recklessly in a valiant effort to save his native land from extinction!

Oil—black gold—the blood of Mother Earth! America had squandered its precious reserves and a syndicate of skilled saboteurs was destroying the remaining store! With all National defense rendered helpless for want of it, bitter despair gripped the hearts of the country’s millions. Pillage, slaughter, and slavery—misery and death—threatened each American! And Jimmy Christopher, Operator 5 of the United States Intelligence, was gambling his life recklessly in a valiant effort to save his native land from extinction!

Be the first to review “Operator 5 #13: March of the Flame Marauders” Cancel reply

After years of over using our oil reserves and prediction of oil depletion, the USA is running out of oil in this novel. Its worldwide fleet is being called home because of a lack of petro. The situation is dire for 25,000,000 car owners, and anyone who uses gasoline for anything else.

So starts “March of the Flame Marauders,” the thirteenth Operator 5 novel, originally published in April 1935.

With oil running out in America’s oil fields, a foreign power starts sabotaging what precious oil that is left, such as sinking an oil tanker at New Orleans, destroying a refinery in St. Louis, or blowing up an oil platform in east Texas. The lack of oil is simply getting worse and worse. (Note: I must admit that I find it somewhat ironically that we have had several months of oil-stock market compression because of a worldwide oil glut… eighty years after that novel was written!) With the ever-growing crisis, the President declares a state of emergency, and a czar is appointed to control rationing the remaining all other nations have plenty of gasoline; it is only the US that does not; so the threat of an invasion, especially in light of the sabotage, is critical.

Not to worry, Jimmy Christopher and company are on the job tracking down the foreigners who are sabotaging America’s oil sources.

He has also a line on a man who has processes for pumping additional oil from otherwise depleted wells. Apparently this process is so robust that if applied to all of America’s abandoned oil wells, the country would have 50-100 years of oil. The problem is that the man who has developed the process hates the US for jailing him for income-tax avoidance and does not want to be found or give the process to the government.

Soon, police on horseback were stopping cars on the road and confiscating them. Trains, bus, ocean liners, trucks are all stopped without fuel to propel them.

Operator 5 presses on until victory is at hand.

There is no actual invasion in this one, only threats of possible enemy actions. We have espionage and worldwide posturing, though.

Could an enemy invade the US successfully if the US ran out of oil? Probably, but it would still be a huge undertaking given the size of this country. Also, even in the 1930s, oil was a worldwide commodity, and the US was a rich country. So, if there was oil depletion in America’s oil fields, the US would simply spend more money to buy it on the worldwide market.

Furthermore, with a depletion of US oil but not for other countries, a more likely scenario would be the nibbling away of overseas possessions rather than a direct invasion. Japan and England are the two countries cited. Frederick Davis is generally correct about Japan being anti-US in this time period, but not so with England who has always been the friend of the US… perhaps it is the proximity of Canada which was still owned by England in the 1930s (or at least more so than today). Anyway his comments about England always seem to me to be far off base… perhaps he is referencing an alternate universe.
So could Operator 5 lead the US back from the brink of oil exhaustion? Perhaps, but even if a new process was found as quickly as was done in this novel , the magnitude of the facilities needed to outfit all America’s oil fields would be immense.

An interesting tale, and I enjoyed it, but I do not think that Davis thought out this threat fully. It remains, though, a fun romp, especially in light of the importance of oil in today’s world.