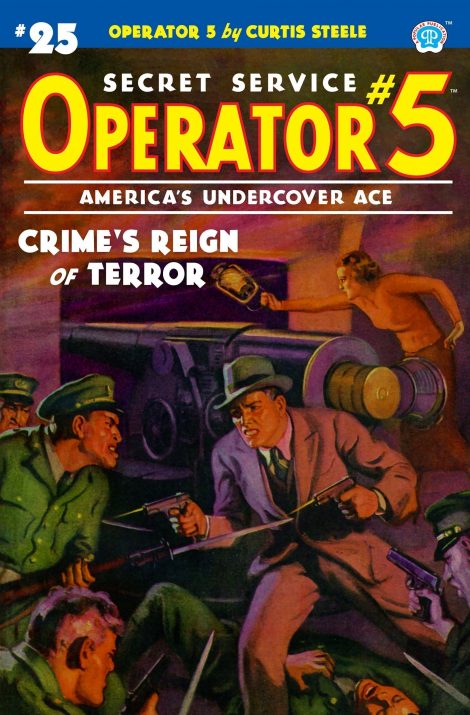 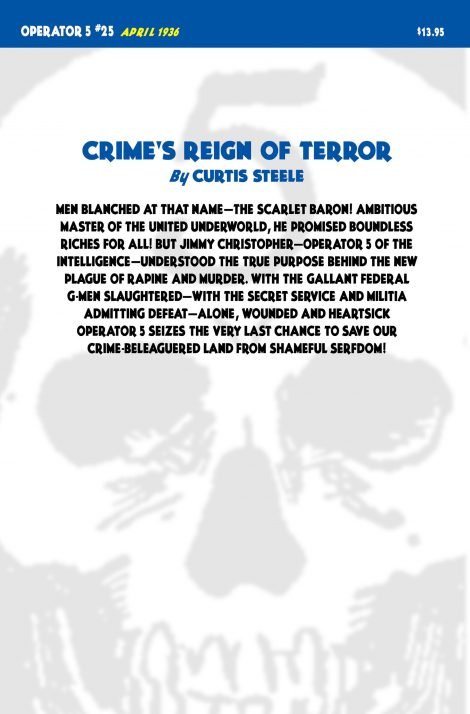 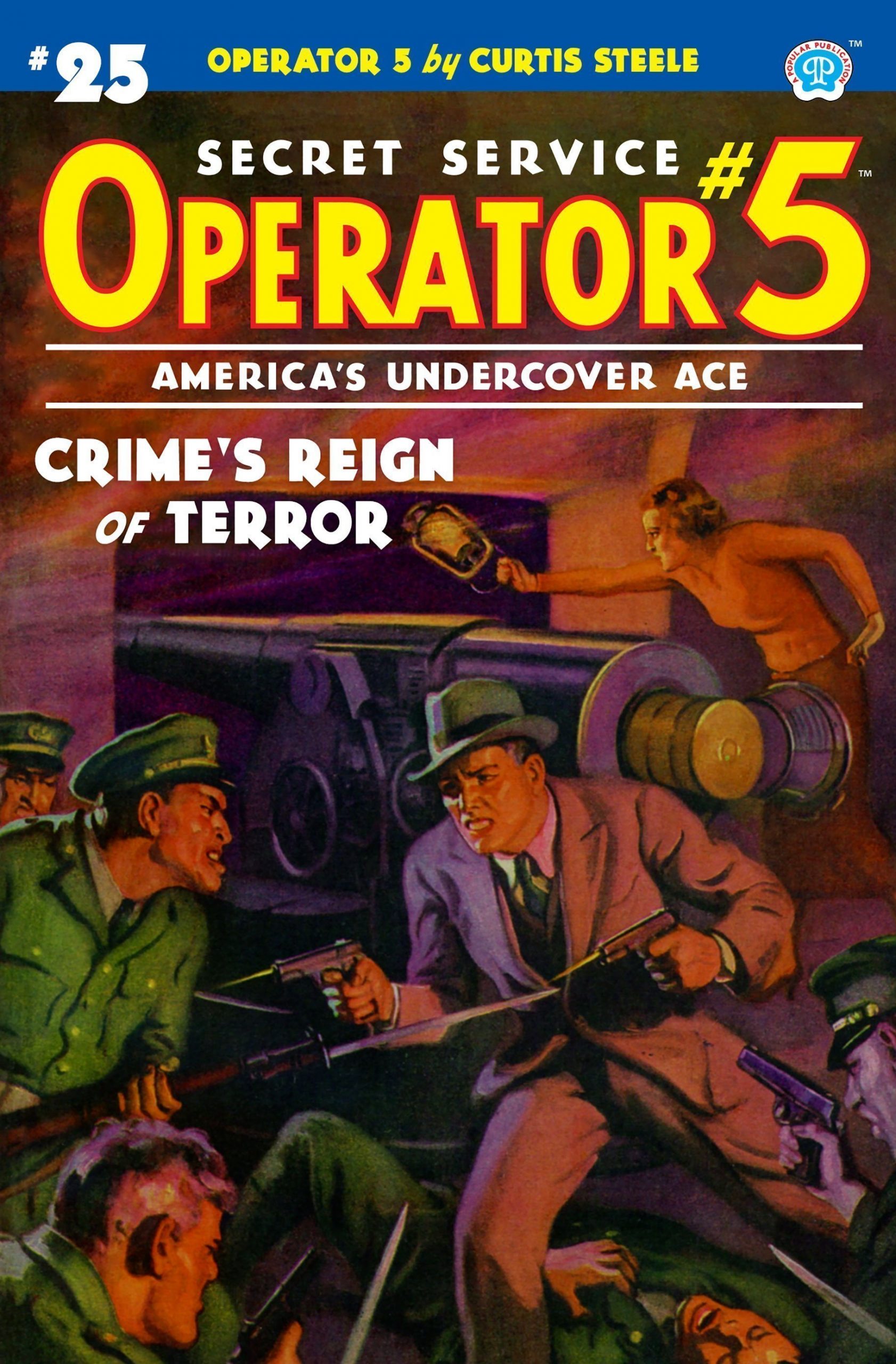 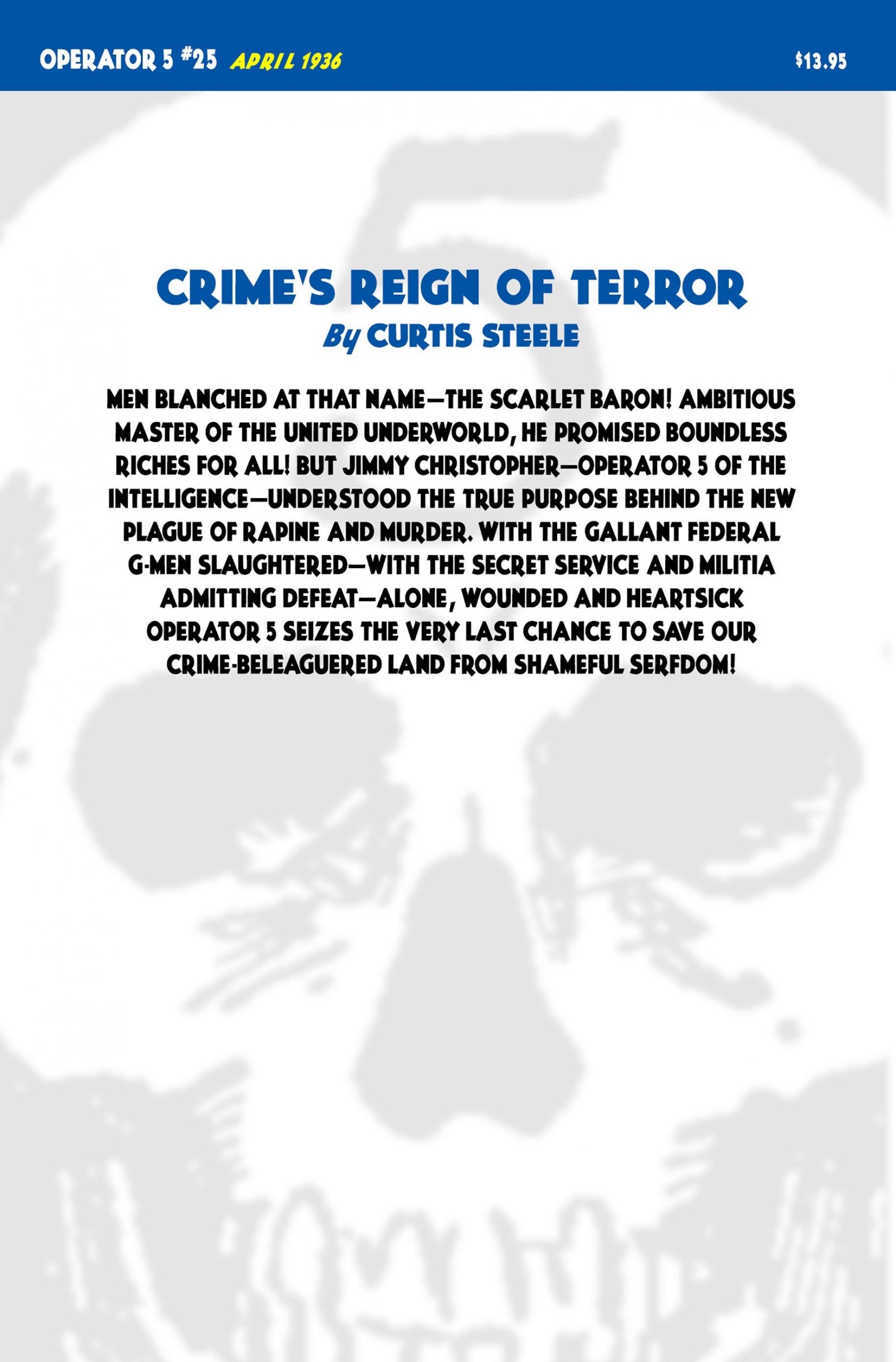 Men blanched at that name—the Scarlet Baron! Ambitious master of the united Underworld, he promised boundless riches for all! But Jimmy Christopher—Operator 5 of the Intelligence—understood the true purpose behind the new plague of rapine and murder. With the gallant Federal G-men slaughtered—with the Secret Service and militia admitting defeat—alone, wounded and heartsick Operator 5 seizes the very last chance to save our crime-beleaguered land from shameful serfdom!

Men blanched at that name—the Scarlet Baron! Ambitious master of the united Underworld, he promised boundless riches for all! But Jimmy Christopher—Operator 5 of the Intelligence—understood the true purpose behind the new plague of rapine and murder. With the gallant Federal G-men slaughtered—with the Secret Service and militia admitting defeat—alone, wounded and heartsick Operator 5 seizes the very last chance to save our crime-beleaguered land from shameful serfdom!

Be the first to review “Operator 5 #25: Crime’s Reign of Terror” Cancel reply

“Crime’s Reign of Terror” is the twenty-fifth Operator 5 novel, originally published in April 1936. This novel would appear to be Tepperman’s fifth contribution to the Operator 5 magazine.

We see another time lapse at the beginning of this story. In the last issue, we saw that the US was in the seventh month of the “Second World War” which had begun only two issues earlier, or two months in publication time. At the beginning of this one, we see Operator 5 returning to New York City after spending six months in Chicago establishing the identity of Dave Orlando, a high-ranking criminal who is listed high on the nation’s most-wanted list, thanks to connections through the Secret Service.

He has been invited back to NYC by the Scarlett Baron, a super criminal who is organizing all of the underworld under his authority. During a meeting with the baron, Jimmy Christopher discovered that this bad guy has more desires than most criminals. His goal is to take over the US; to emphasize the point, he has 51 G-men machine-gunned in the first chapter.

Although initially apparently unrelated, the Nation Wealth-Sharing Movement soon proves to be part of the Scarlett Baron’s strategy. Through it, he is promising the masses, the Class of Forgotten Men, a distribution of the nation’s wealth. One man is carrying a sign that reads: “The Scarlett Baron will lead us of poverty. Join now.”

The US government is under great pressure. The hegemony of criminals are robbing and killing law enforcement throughout the country. The communist-like wealth-sharing movement is sponsoring violent riots to spearhead its aims. City after city fall to the rioters. Key men are inoculated with a drug by the baron’s minions such that they become addicted and require additional doses to keep from going crazy, thereby assuring their 100% obedience. Washington DC has rioters coming from three sides; also, the Scarlett Baron takes over the Aberdeen Proving Ground in Maryland and is thereby able to shell the capitol. The baron declares himself to be commander of the US which is to say that he is its dictator.

The picture is bleak, but Operator 5 tracks down the Scarlett Baron and kills him along with some of his supporters. Apparently, this is sufficient to end the revolution.

Could the Scarlett Baron have arranged this revolution? Doubtful. In fact, the US would have deployed the army to stop rioters if they approached the level in this novel…the national guard was called out but apparently its members were in agreement with the rioters and therefore inadequate to quell them. With the rioters neutralized, the criminals, even with key people inoculated to be slaves to the baron, would likely have been able to pull off a national coup as easily as shown in this novel.

Not a bad tale, but perhaps not quite as good as some of the earlier ones. Much of the beginning is similar to a Spider novel. When Tepperman raises the level of conflict to include a revolution being pushed by criminals, the tale seems to lose some of its credibility. If someone is interested in a typical Operator 5 novel, this is probably not the right one for that person.

The Spider #38: City of Dreadful Night