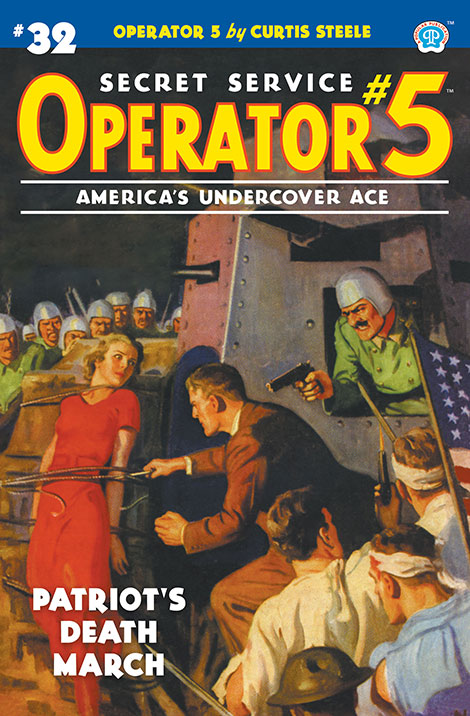 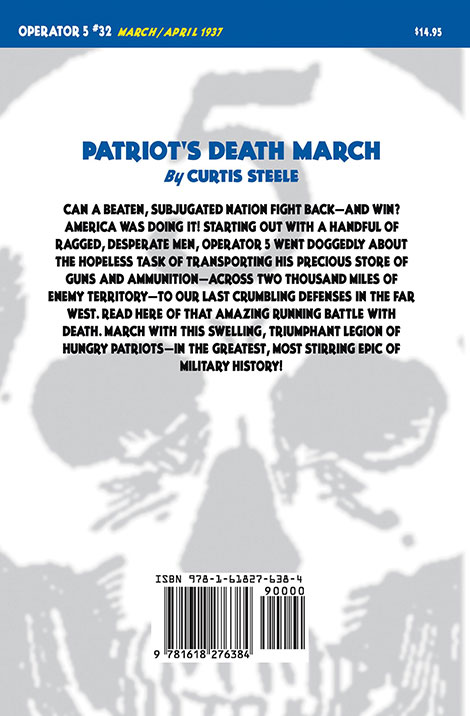 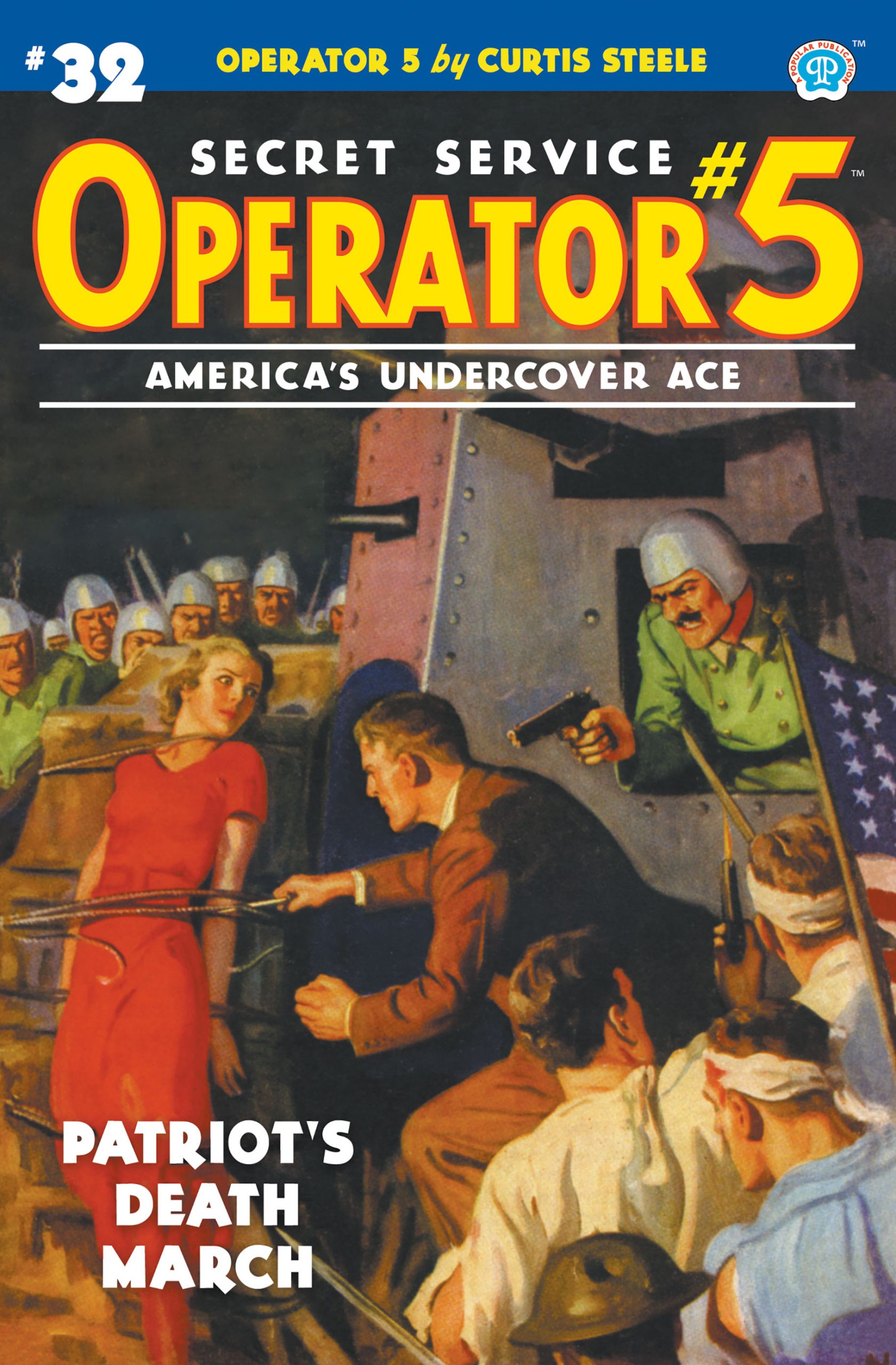 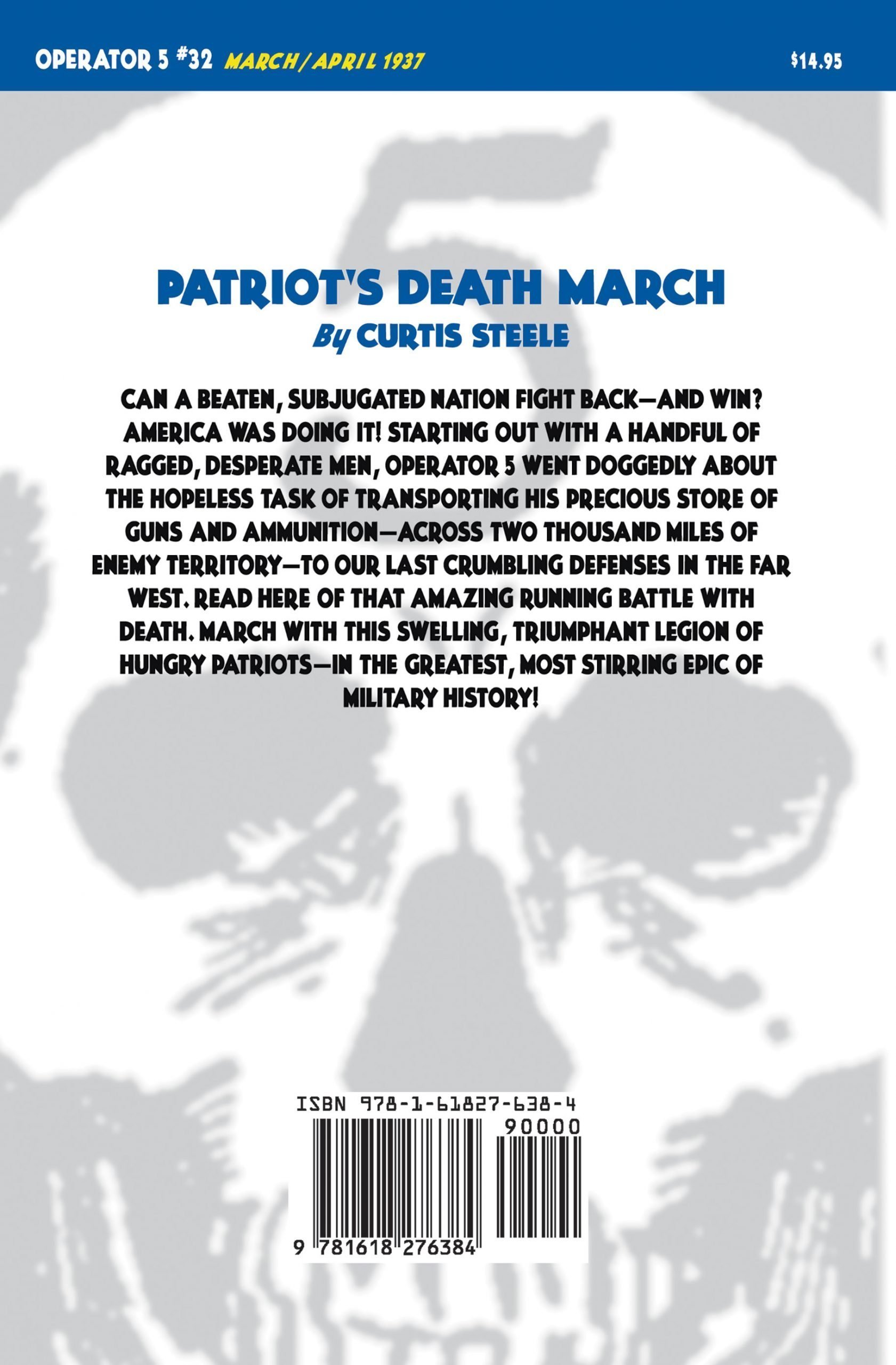 Can a beaten, subjugated nation fight back—and win? America was doing it! Starting out with a handful of ragged, desperate men, Operator 5 went doggedly about the hopeless task of transporting his precious store of guns and ammunition—across two thousand miles of enemy territory—to our last crumbling defenses in the Far West. Read here of that amazing running battle with death. March with this swelling, triumphant legion of hungry patriots—in the greatest, most stirring epic of military history!

Can a beaten, subjugated nation fight back—and win? America was doing it! Starting out with a handful of ragged, desperate men, Operator 5 went doggedly about the hopeless task of transporting his precious store of guns and ammunition—across two thousand miles of enemy territory—to our last crumbling defenses in the Far West. Read here of that amazing running battle with death. March with this swelling, triumphant legion of hungry patriots—in the greatest, most stirring epic of military history!

“Patriot’s Death March” is the thirty-second Operator 5 novel. It was published in March 1938. At this point, for the remainder of 1938, Operator 5 has become a bi-monthly publication once again. This novel is the seventh, and middle, chapter of the 13 Purple Invasion stories.

The situation is desperate for the US. The Central Empire has conquered the US from the east coast to the Rockies, and the American positions in the Rockies are starting to fail. The use of huge artillery guns produced in Pittsburgh has put great pressure on the Americans. Even though Operator 5 destroyed the manufacturing of these weapons in the last novel, the existing guns are still in place. The empire is rushing 10 trains loaded with additional weapons to the front. If they arrive intact, the American positions will undoubtedly fail.

When Operator 5 destroyed the operations making “Big Berthas” in Pittsburgh and 20,000 Purple troops, he had set out westward with a convoy containing big guns for the US and much additional war materiel. They were attempting the impossibility of crossing occupied US from Pittsburgh to the Rockies with this materiel. At the opening of the novel, they have crossed about a third of the way, but the Purple Empire is planning an ambush as they attempt to cross the Arkansas River at a point not specified in the novel.

When a spy flyer reports the ambush to Operator 5, he tells him that his real goal is to hijack the 10 trains and take them to American lines. All the important materiel has been removed from the convoy, and 500 volunteers, none of whom have wives or children, will act as a suicide decoy to divert attention as Operator 5 attends to the real objective.

Operator 5 is successful in his hijacking of the trains. The next step is to get to through to the Rockies safely, which surprisingly he is able to accomplish.

However, with such a great victory comes defeat, Z-7 surrenders American forces to the Purple Empire. Operator 5 is simply a little too late with his supplies. The Americans are being pounded mercilessly, and Z-7 feels he has no option.

Of course, Operator 5 will not surrender. He takes his forces to Death Valley where he hopes to hold out with his remaining men and supplies. A desperate gamble…his only other choice is to surrender too. It is hard to see how his army will survive in Death Valley now that the official American forces have surrender, but that is a story for the next issue.

Could the Purple Empire have accomplished what it did in this novel? As far as defeating the Americans, it had the resources to do so. It took a lot of incompetence to allow Operator 5 to hijack the trains.

Could Operator 5 have accomplished what he did? Less likely, but perhaps not impossible. A couple of points of interest are:

Overall, another good novel. One is left wondering at the end how Operator 5 will be able to cope with the new reality… life within Death Valley will be a trial.

Operator 5 #24: War-Masters from the Orient